12 more days till I can enjoy the view from my house every. single. day. 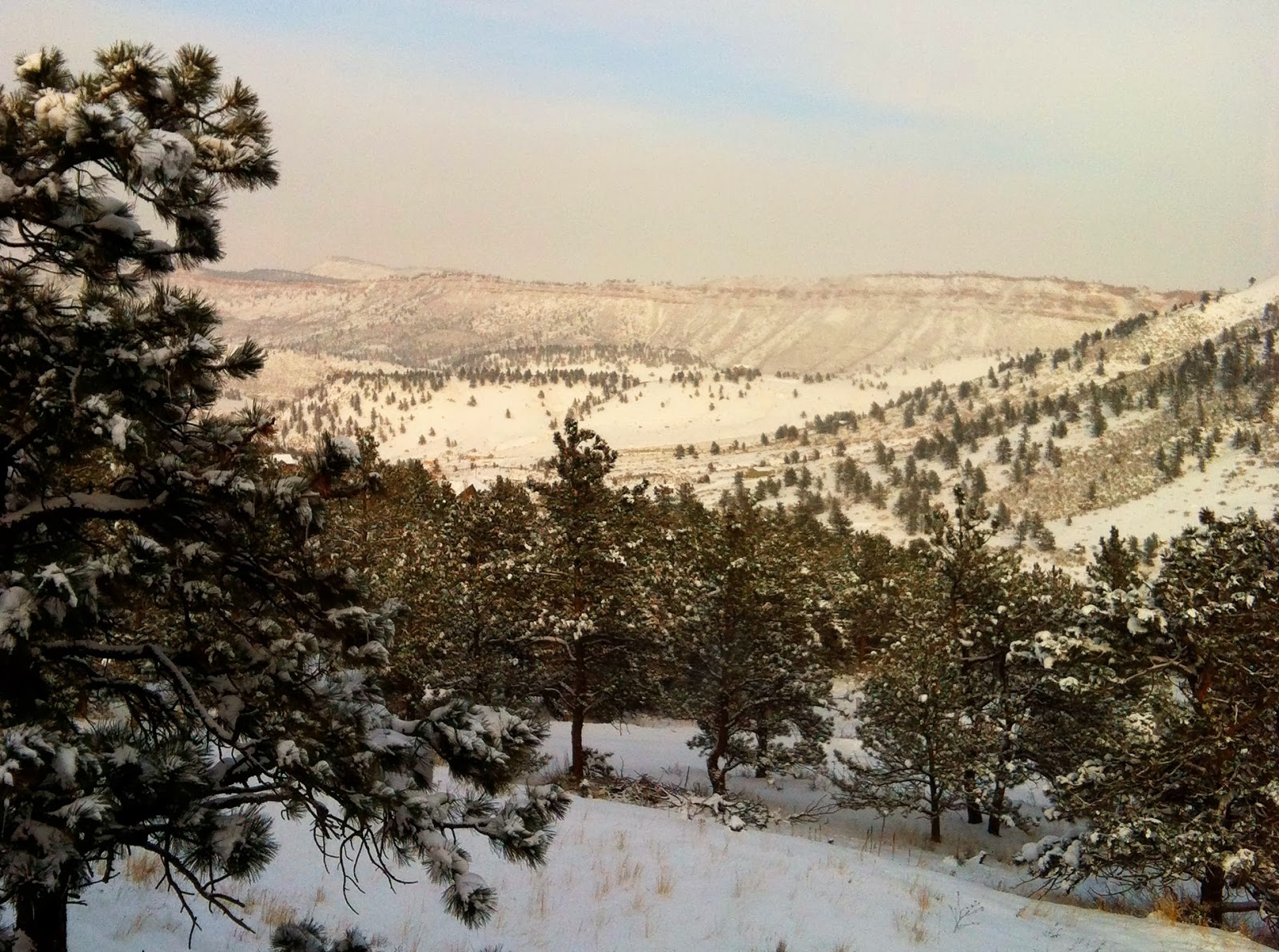 Stanley and I did a dog show in Denver on Valentine's weekend. He was Select Dog both days and most importantly we had fun! 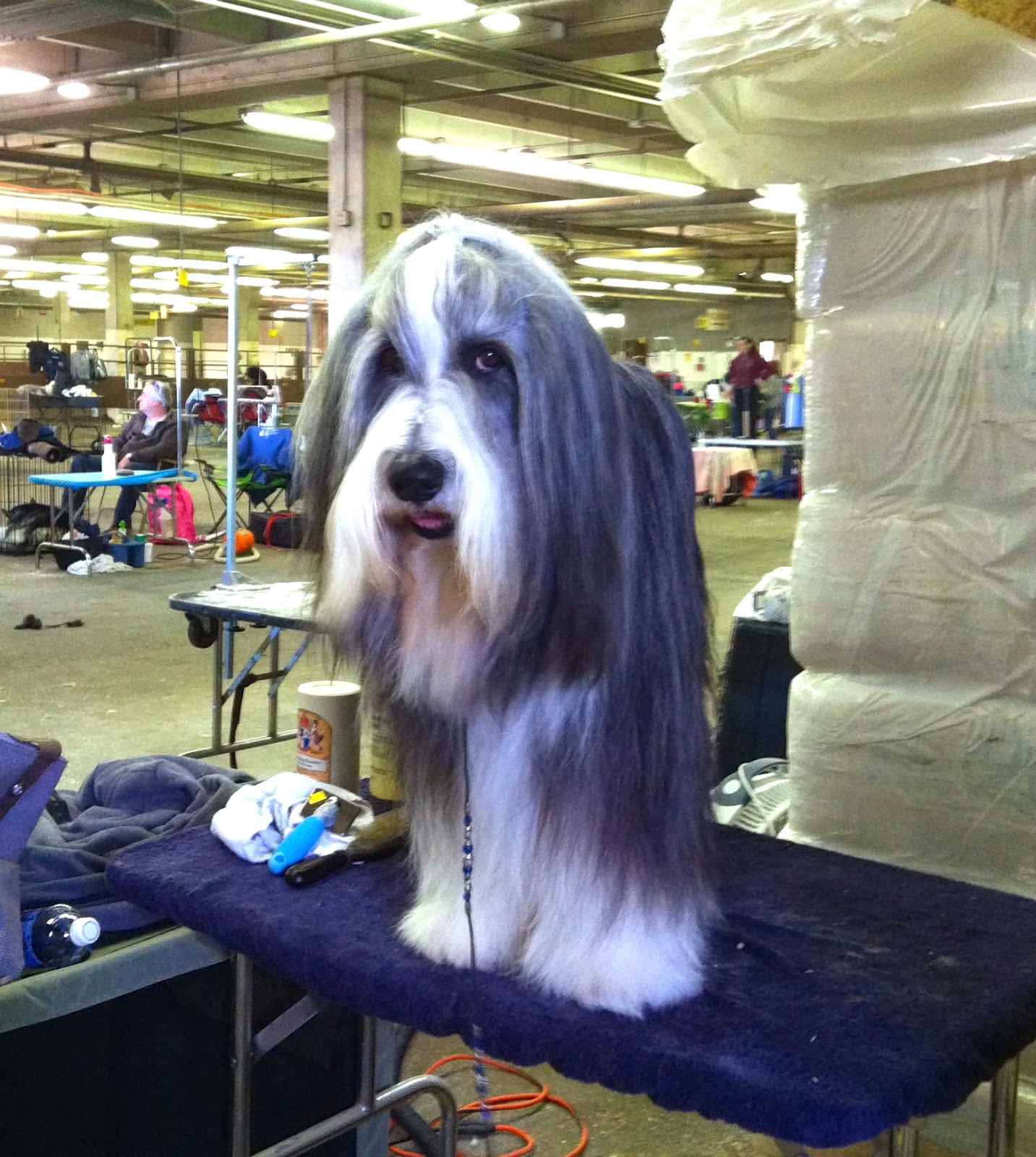 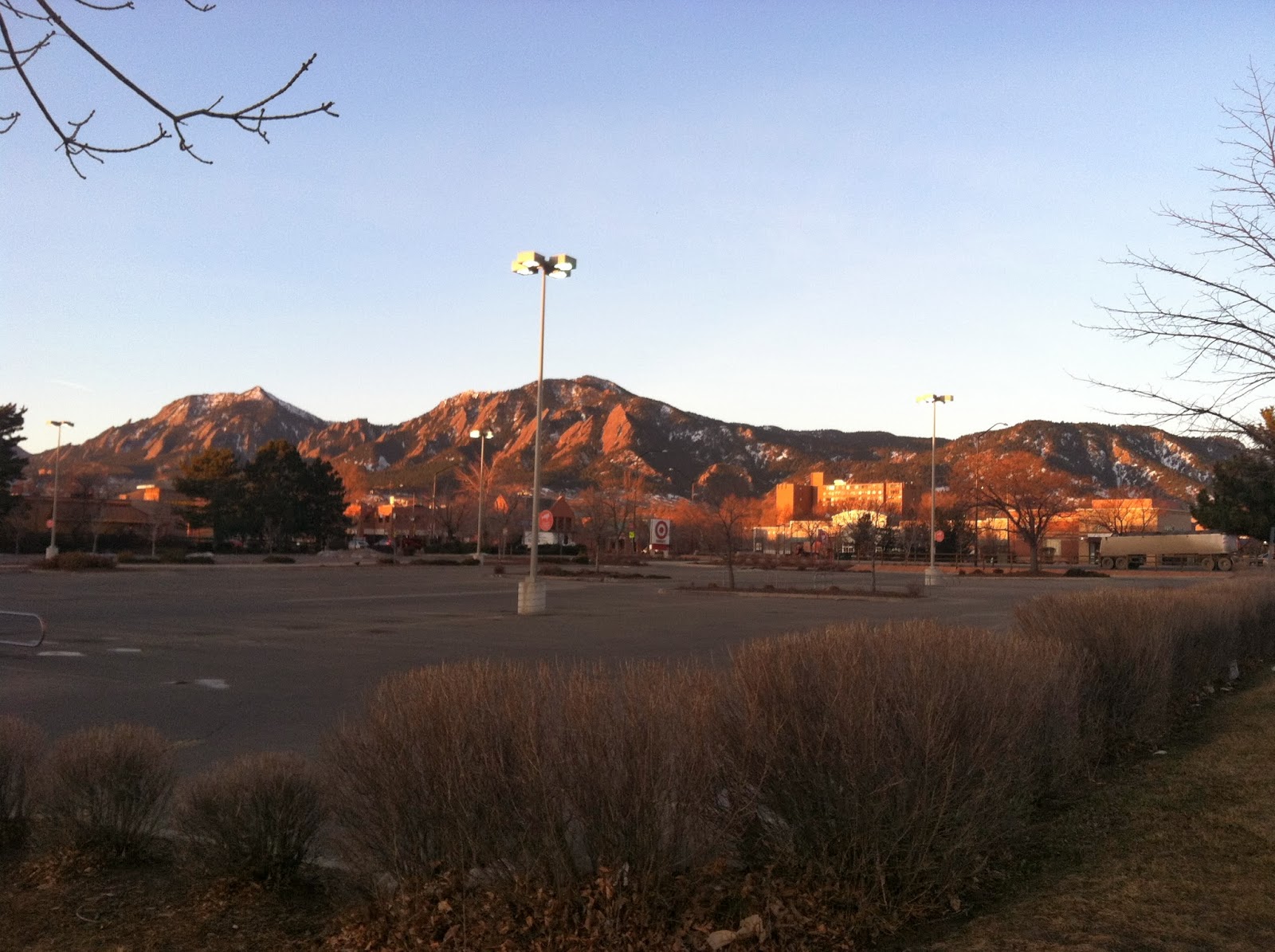 The boys and I hiked Rabbit Mountain on a VERY cold day a couple weeks ago. 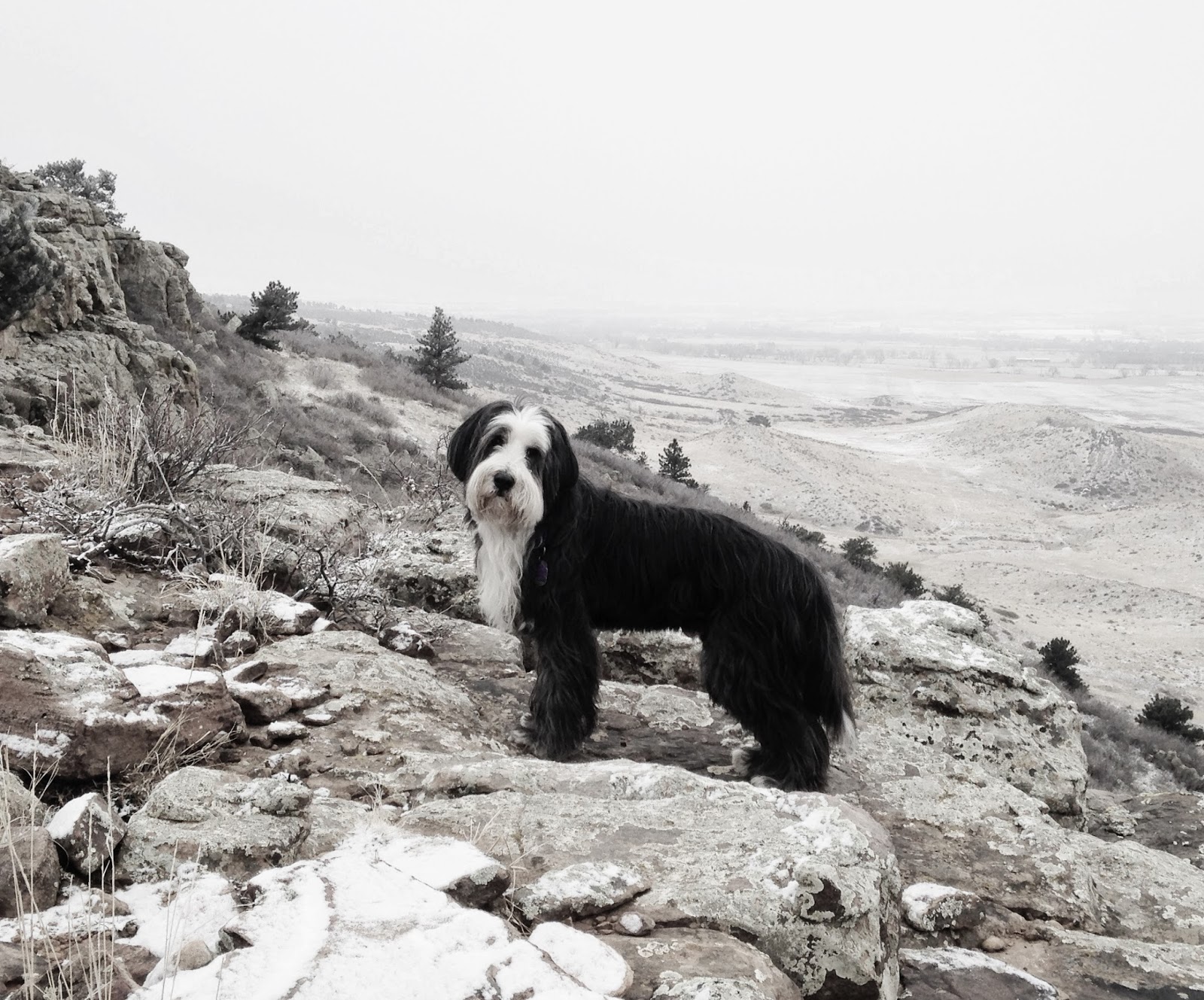 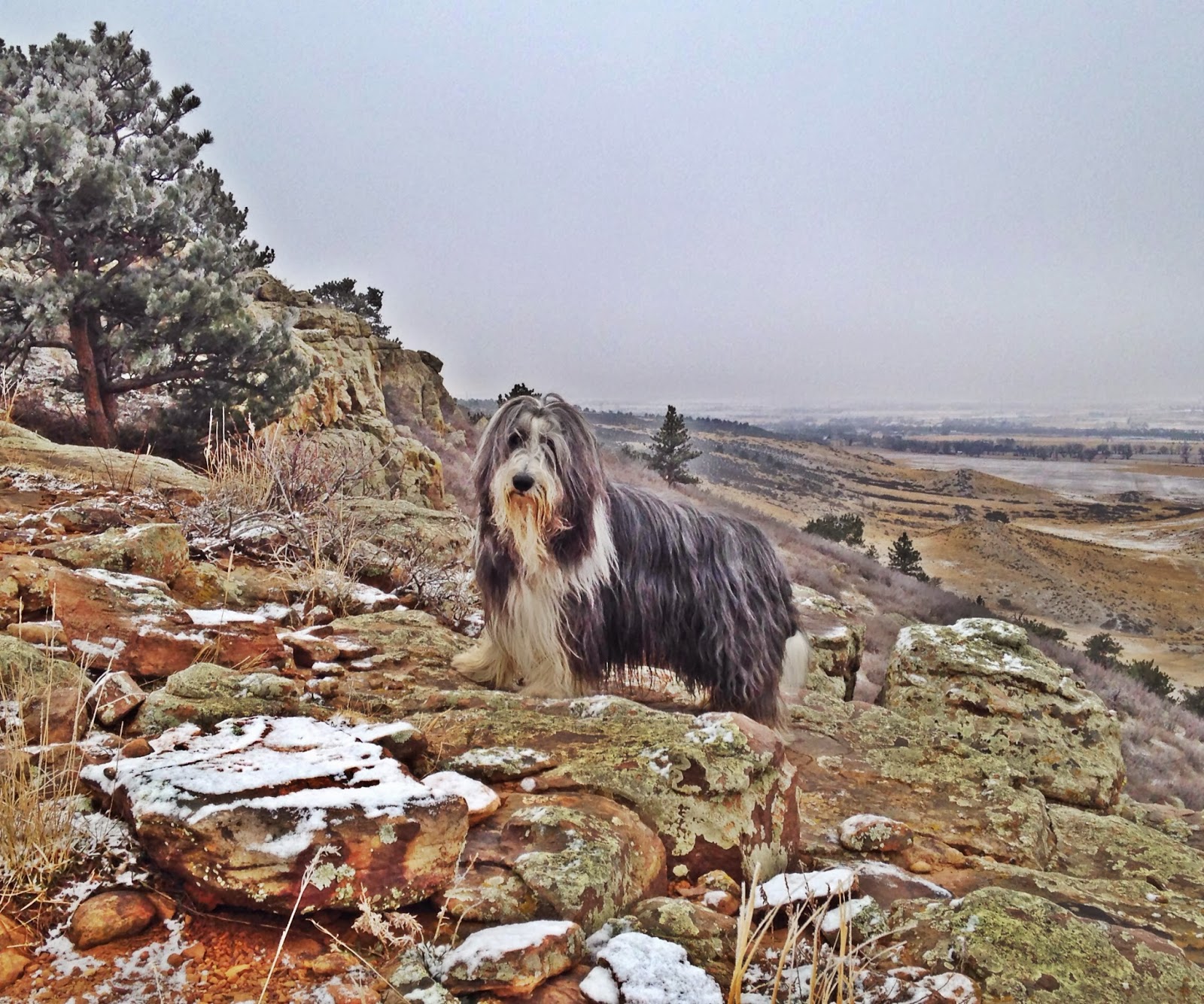 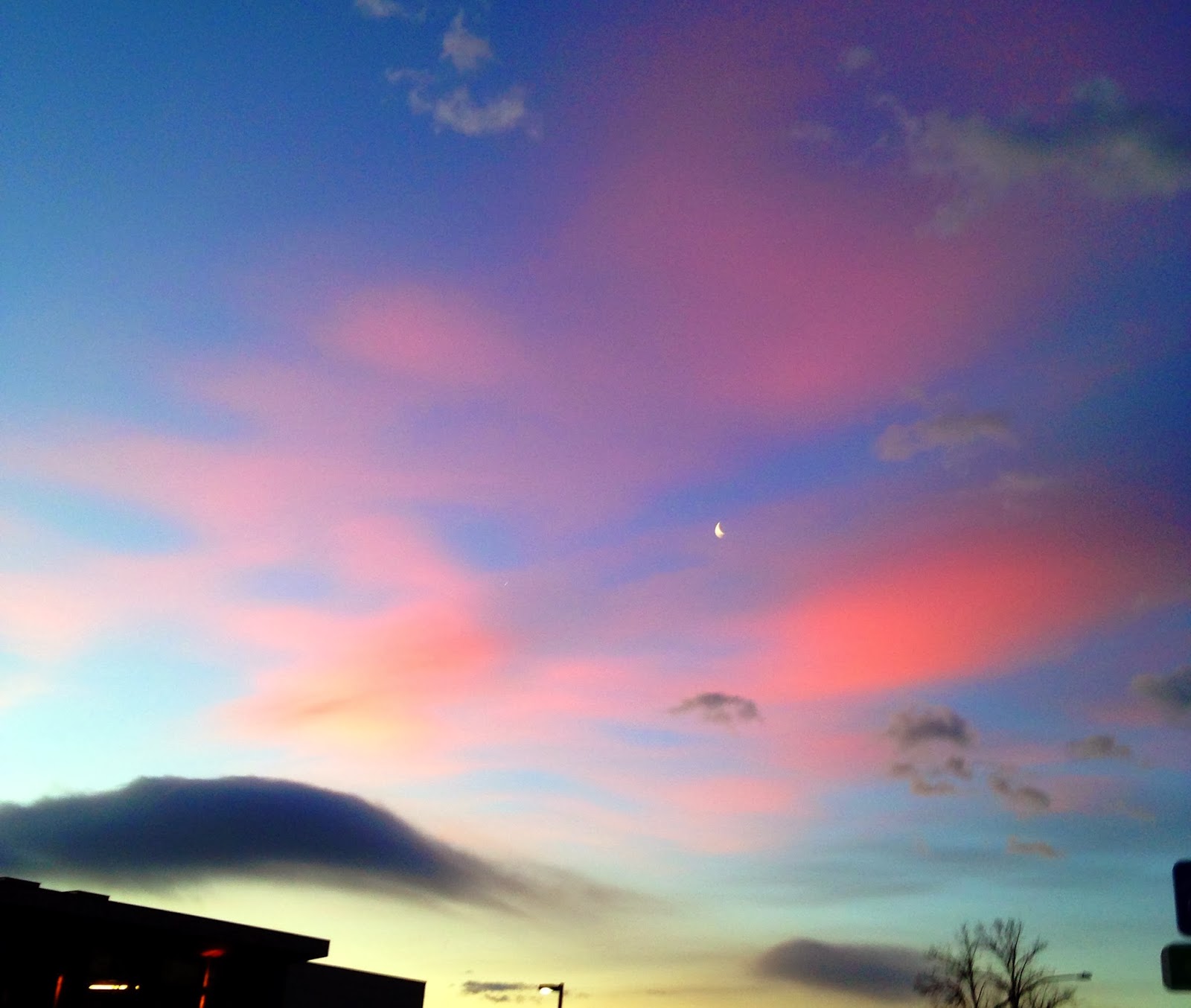 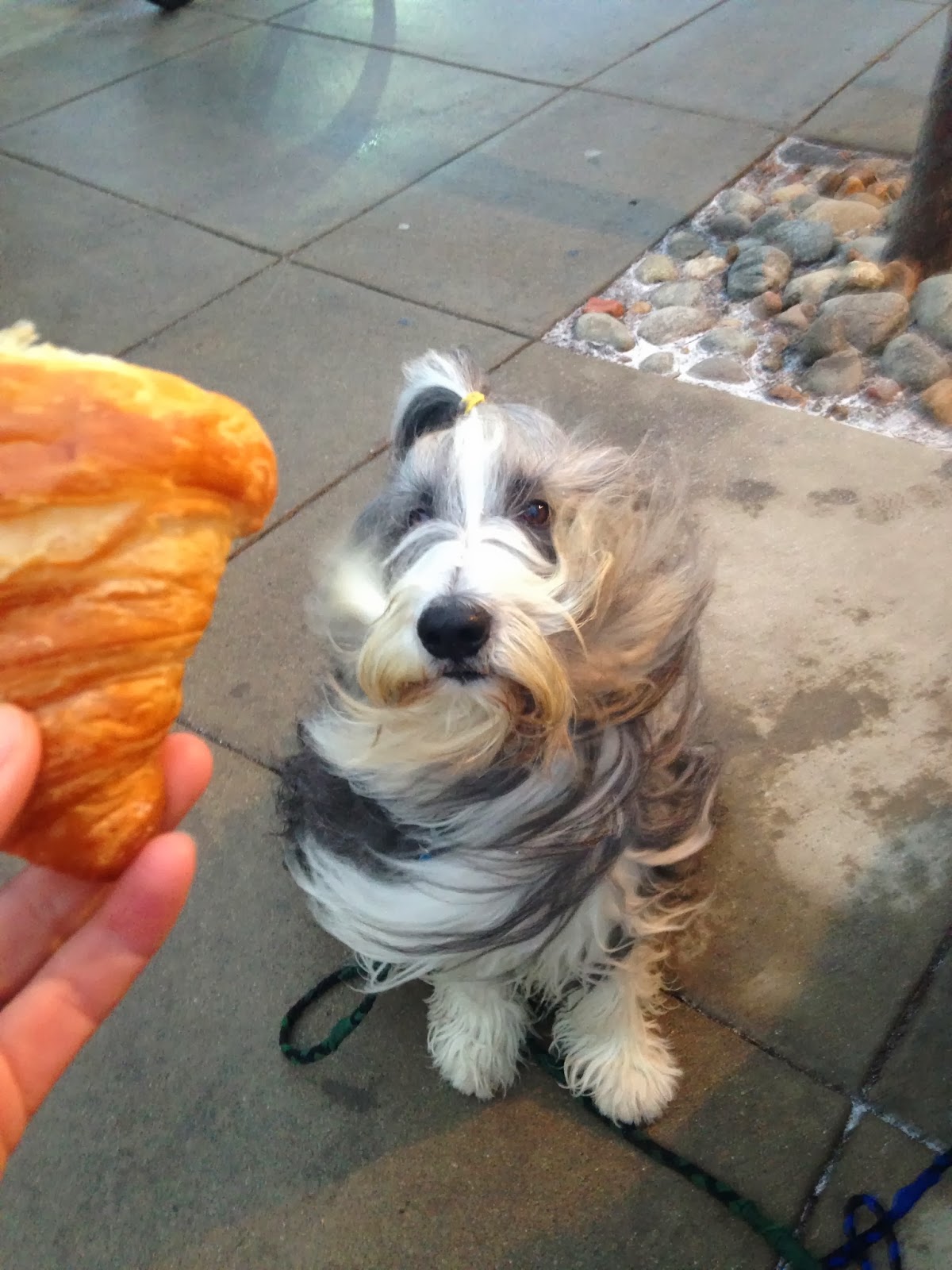 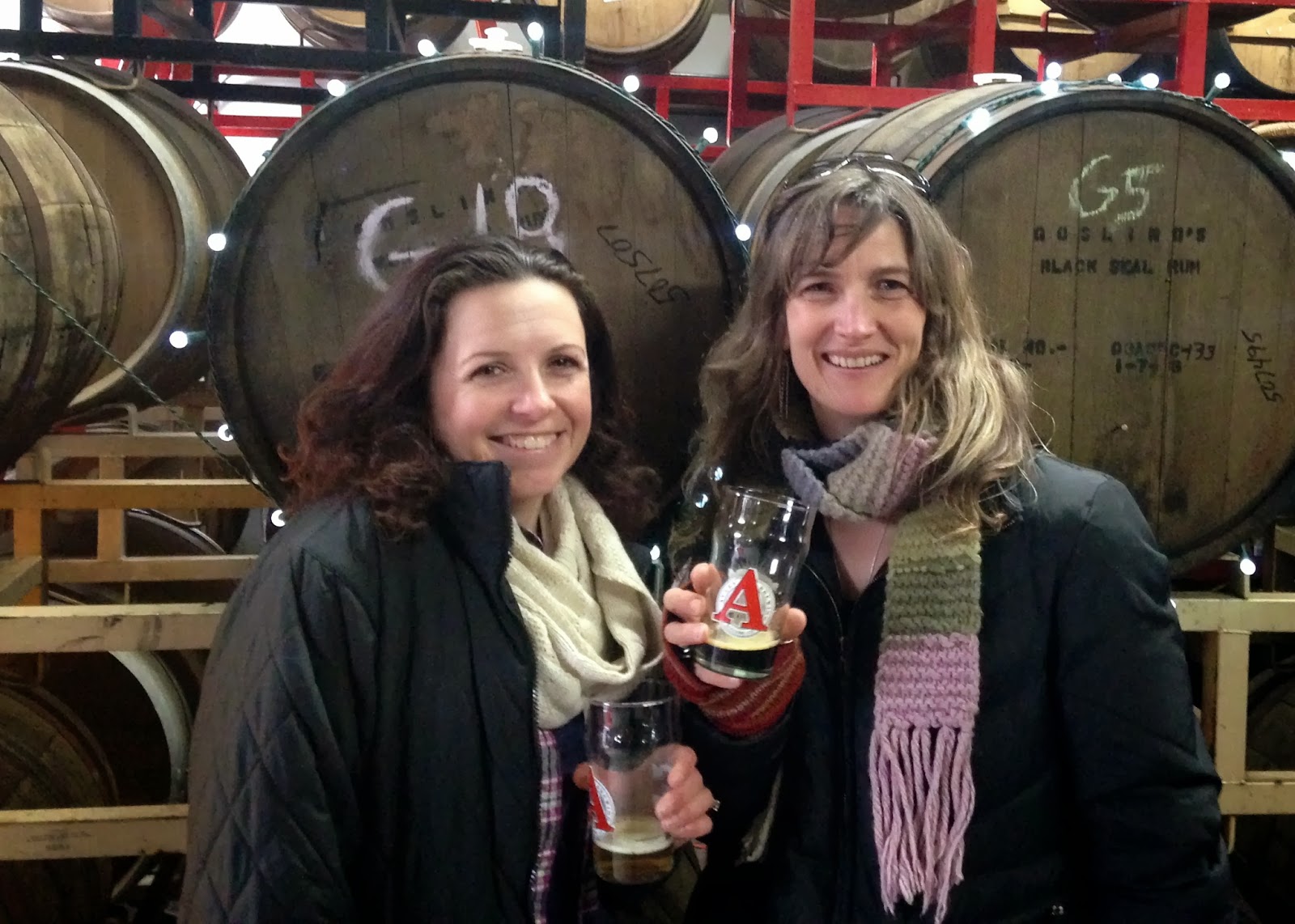 But I did let him play with his best buddy in the snow after that! 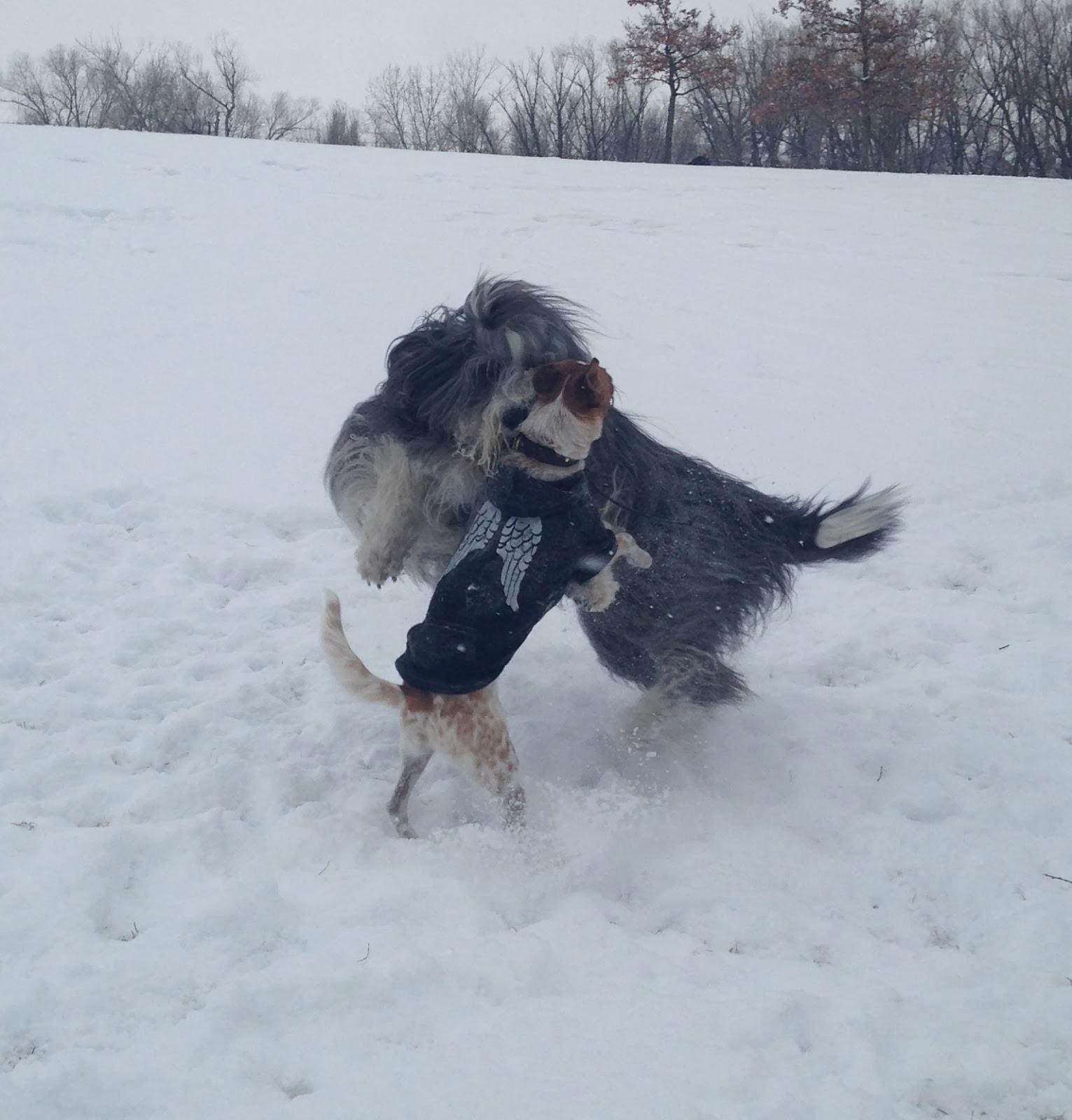 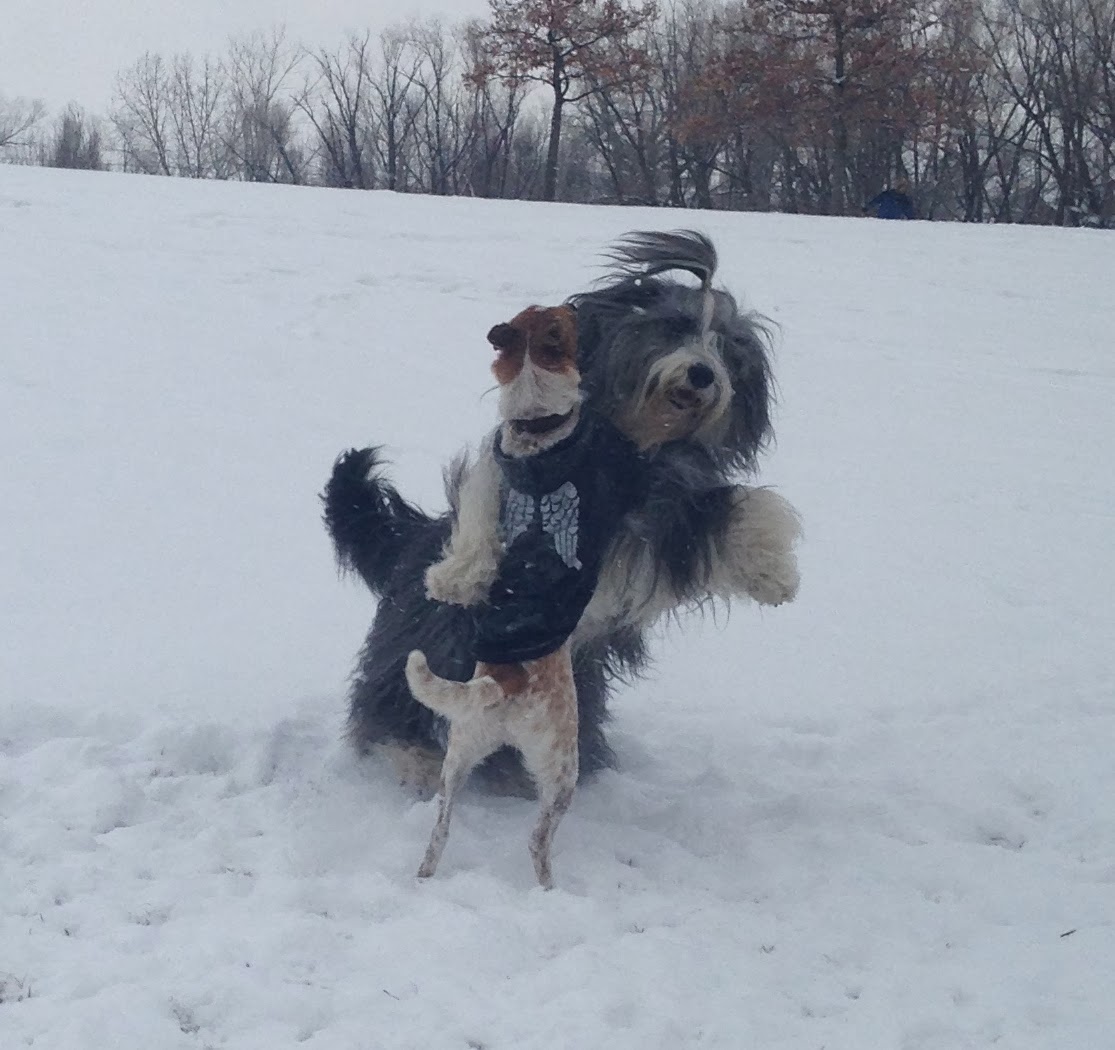 We also visited the dog park in our new-future town last weekend.  10 acres of fun! 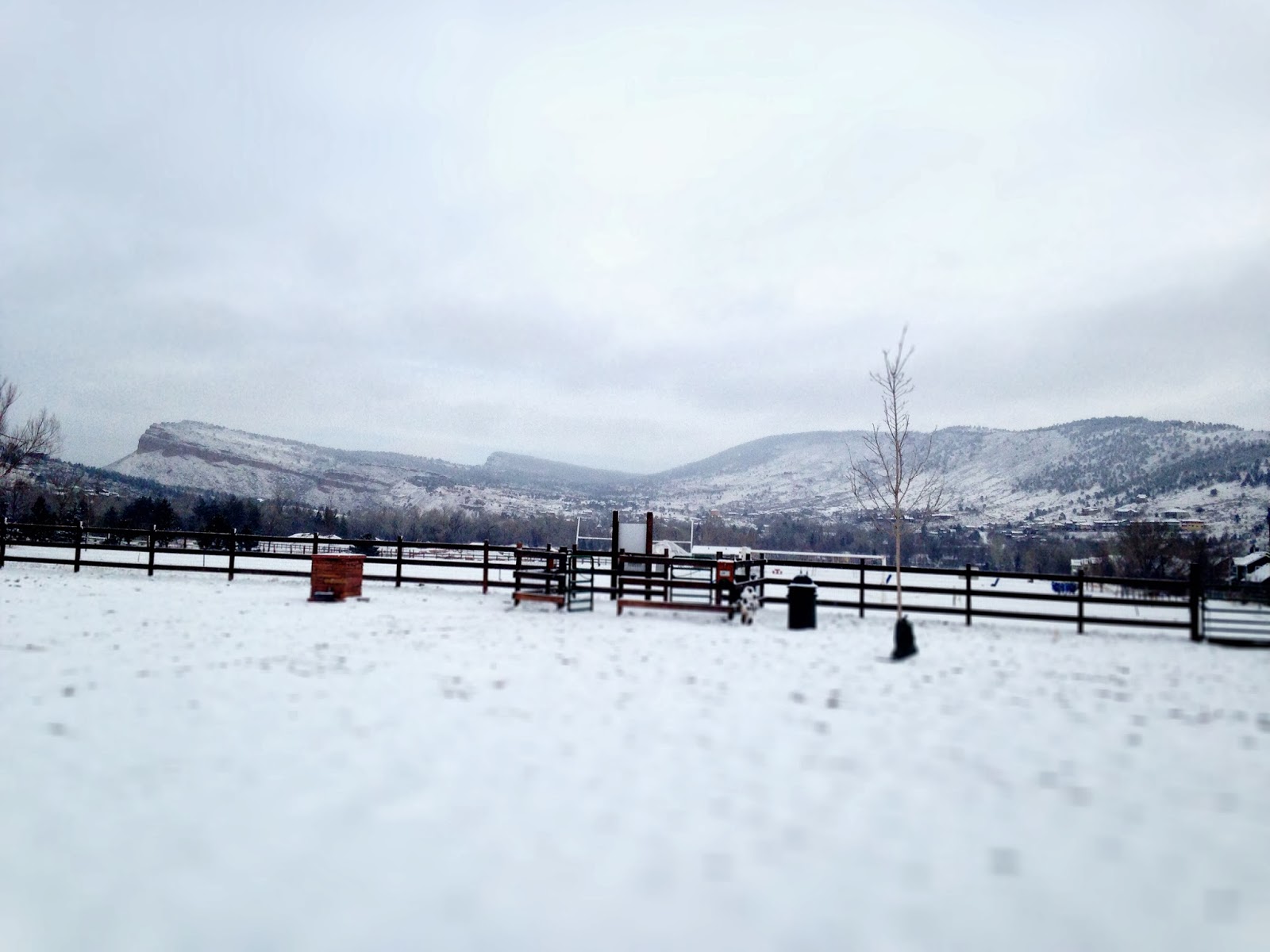 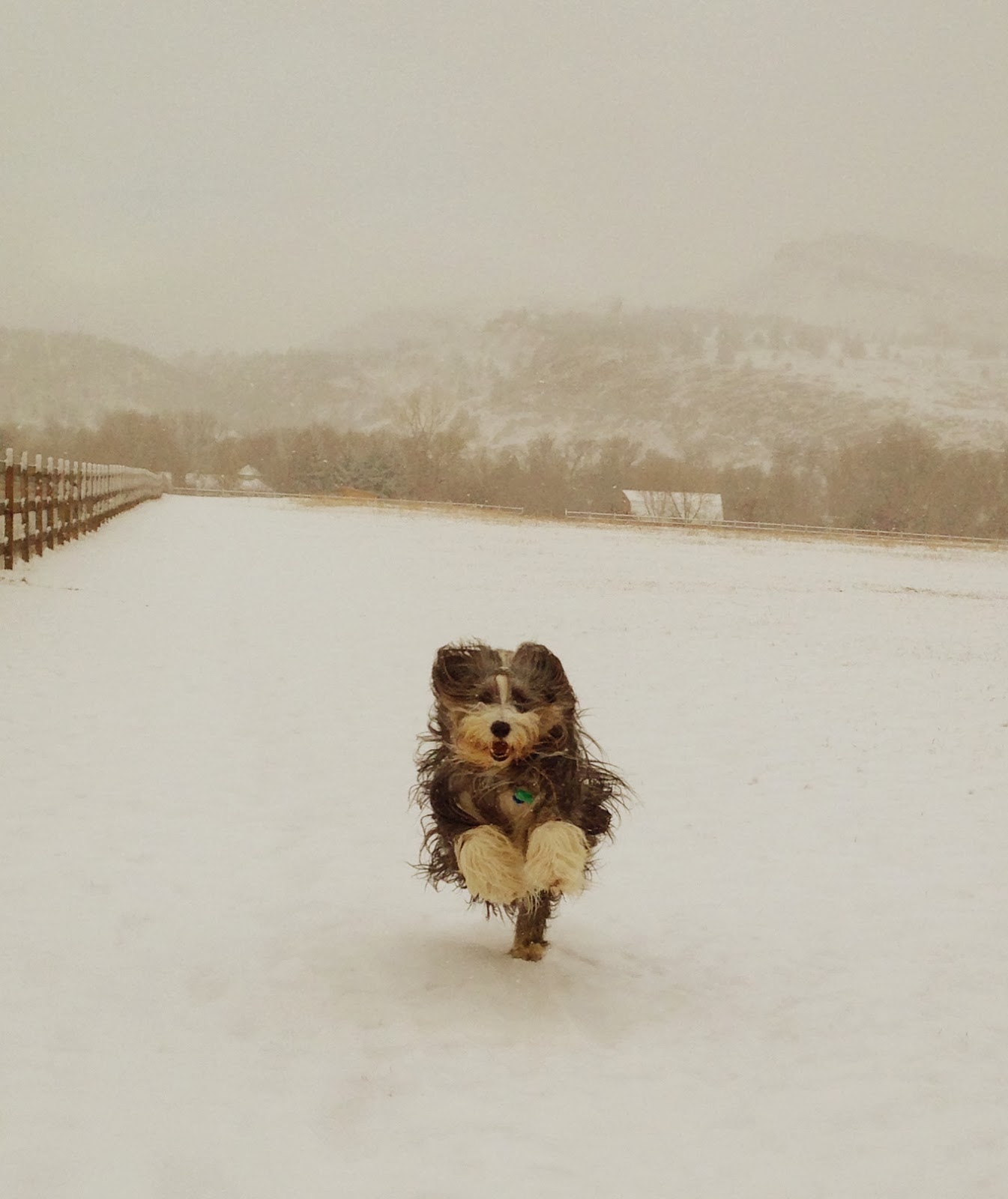 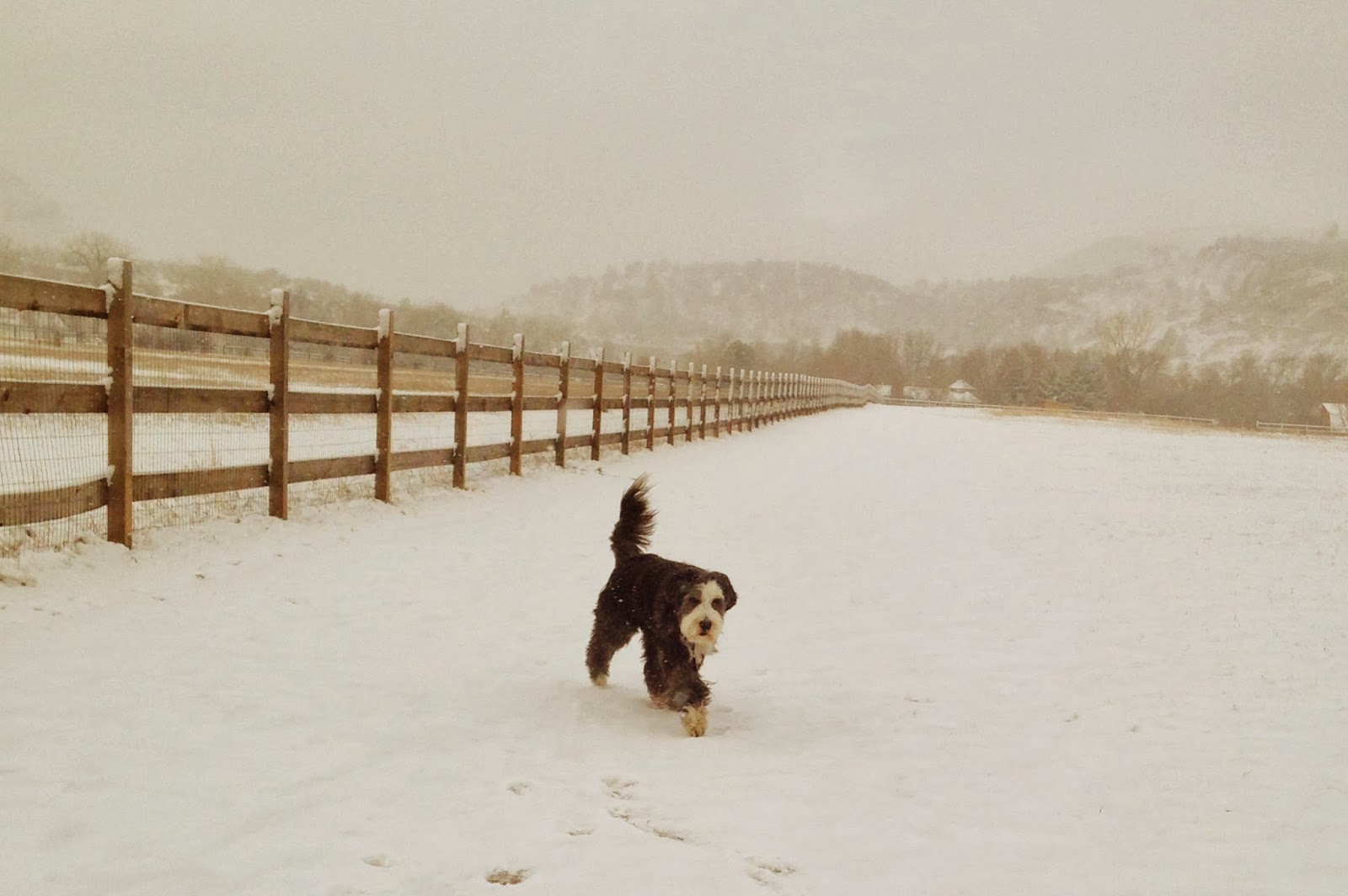 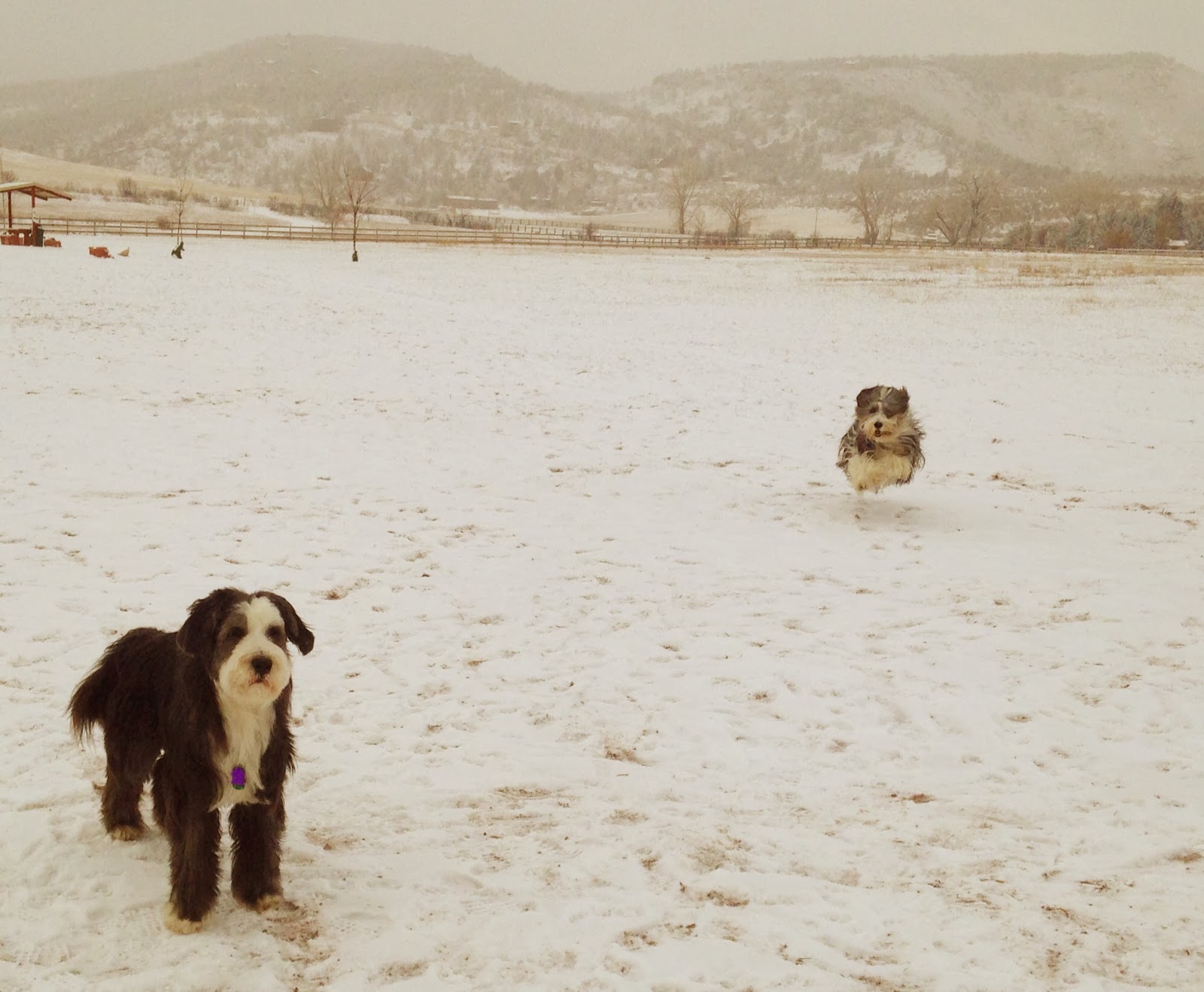 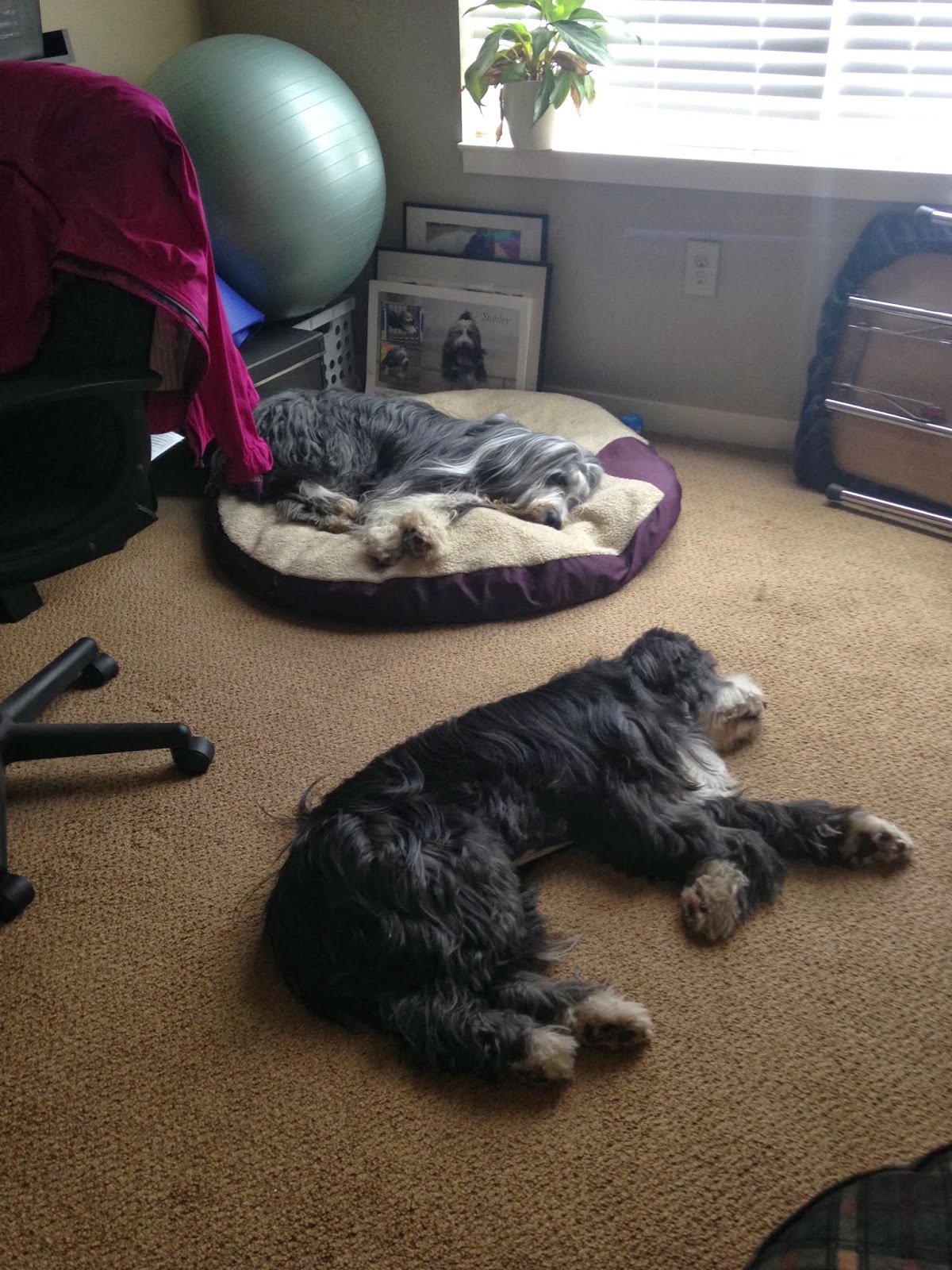 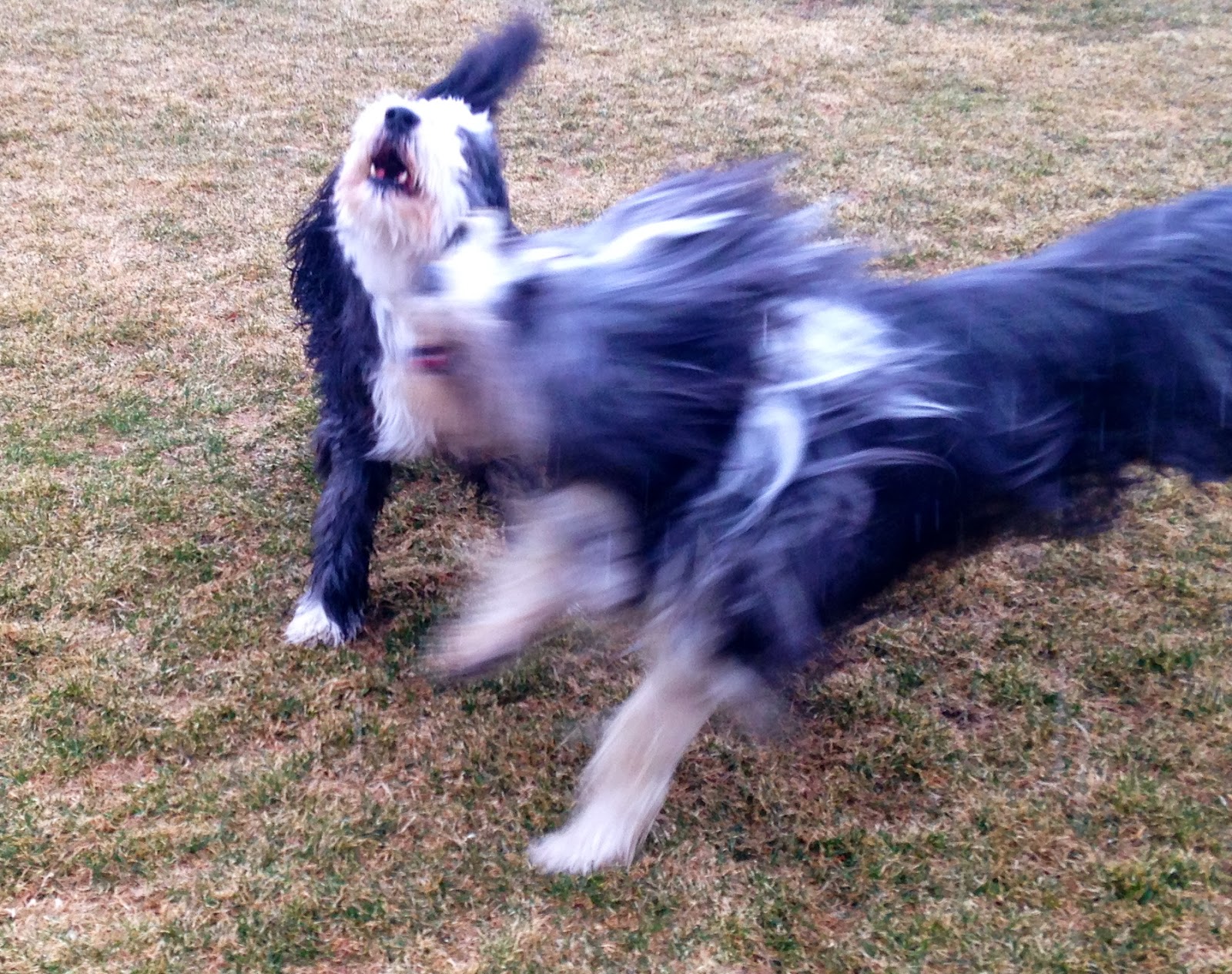 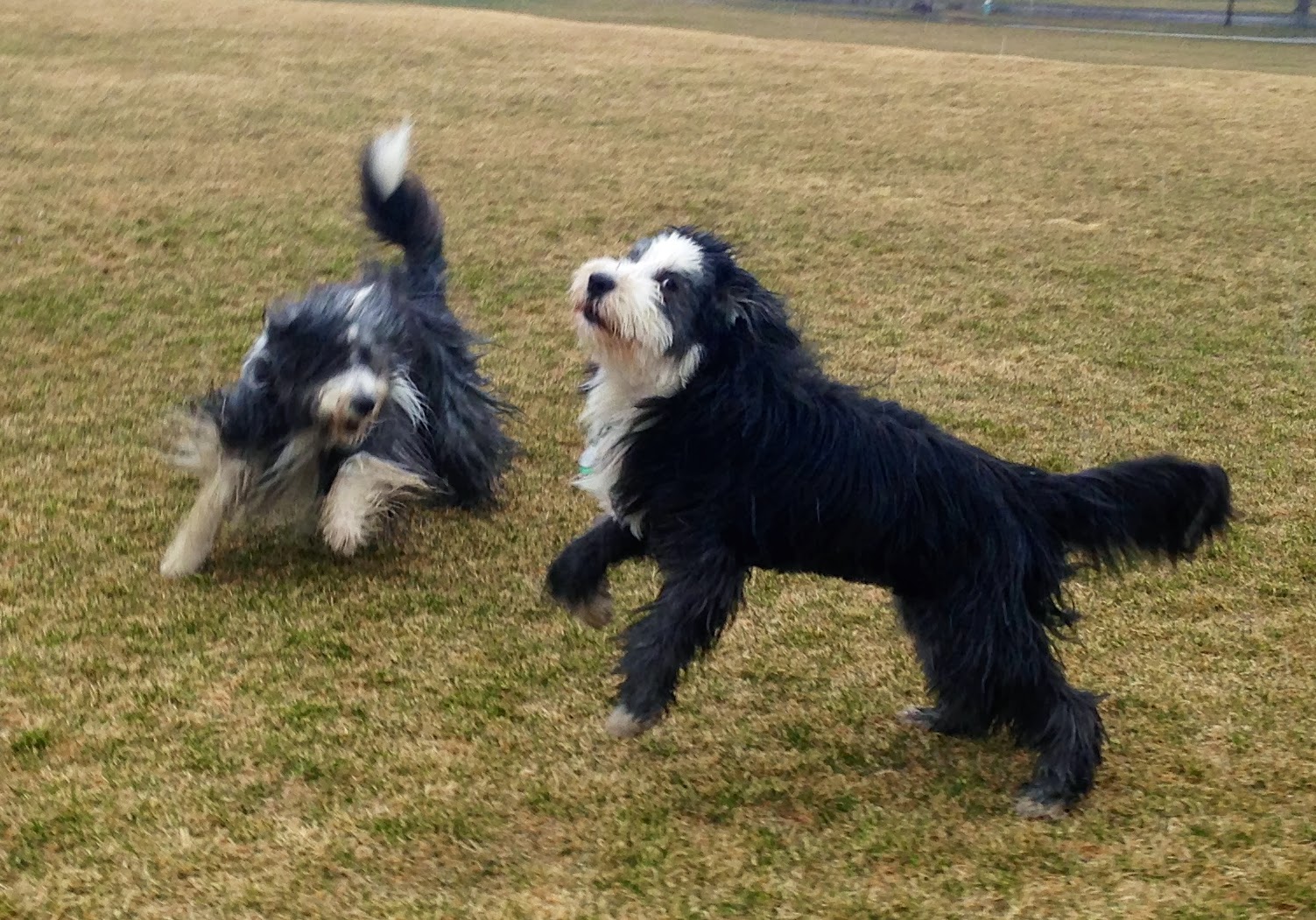 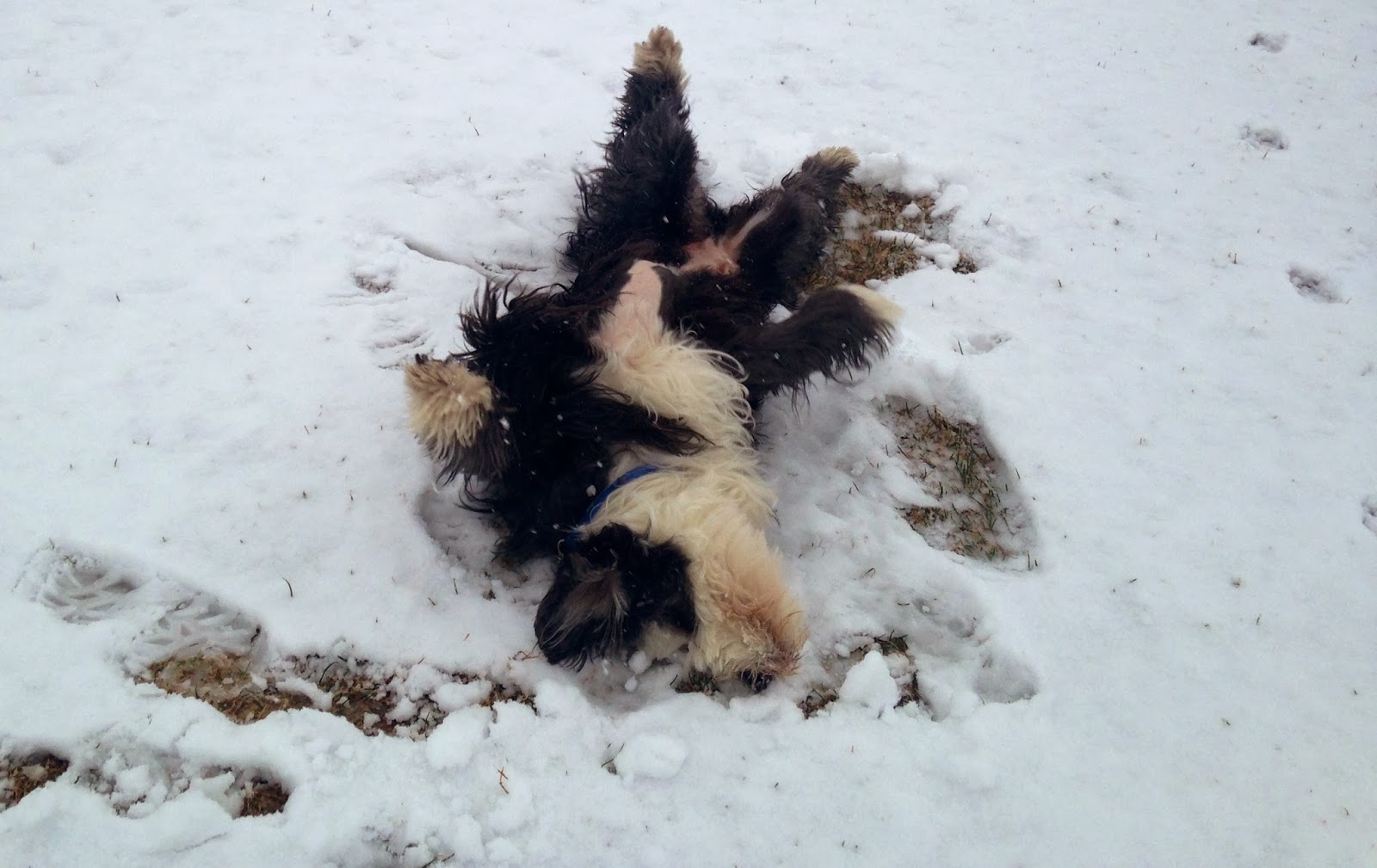 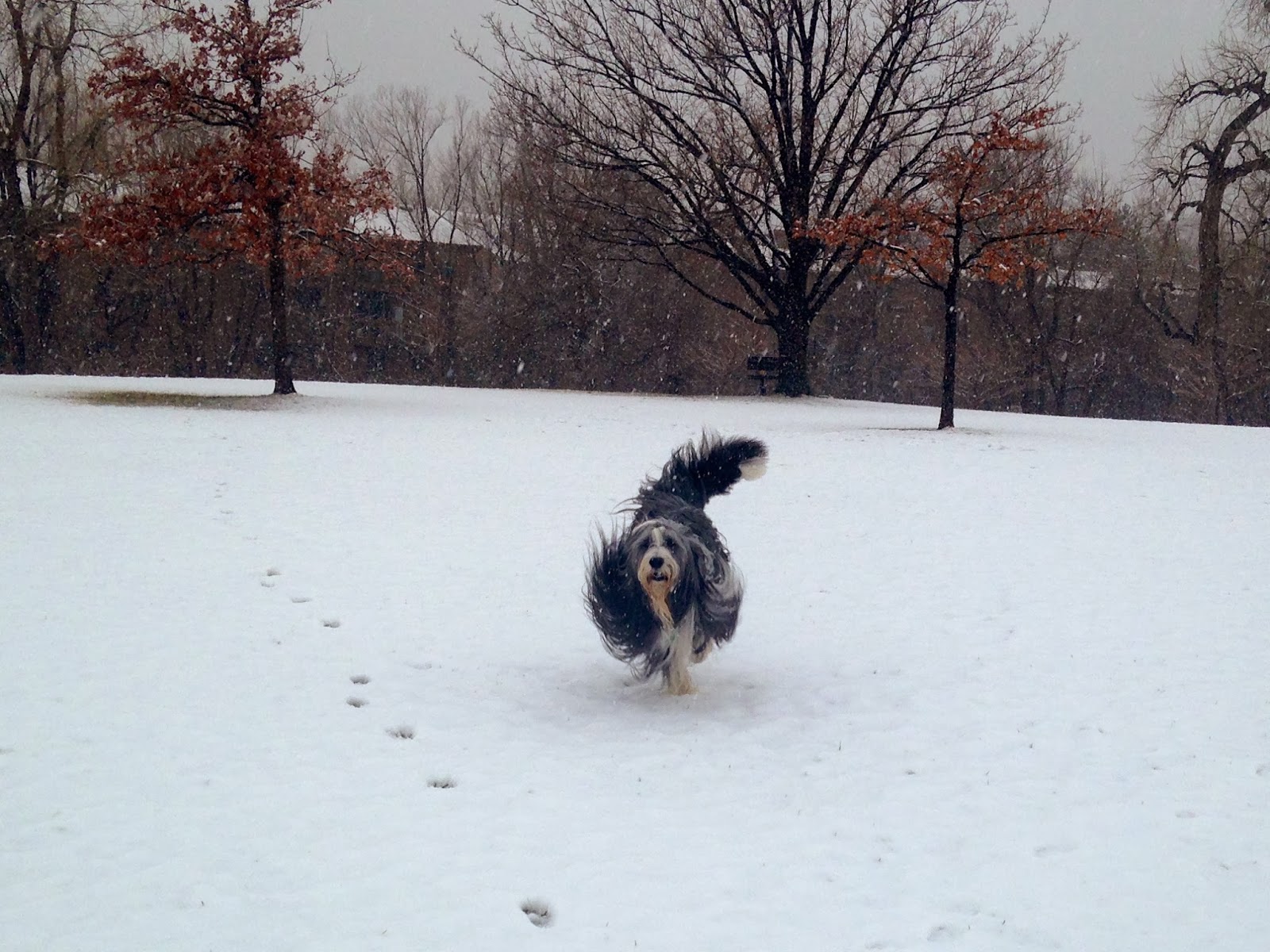 And then - this should be a novelty because I DON'T take stupid selfies all the time - we had a little fun with it :) 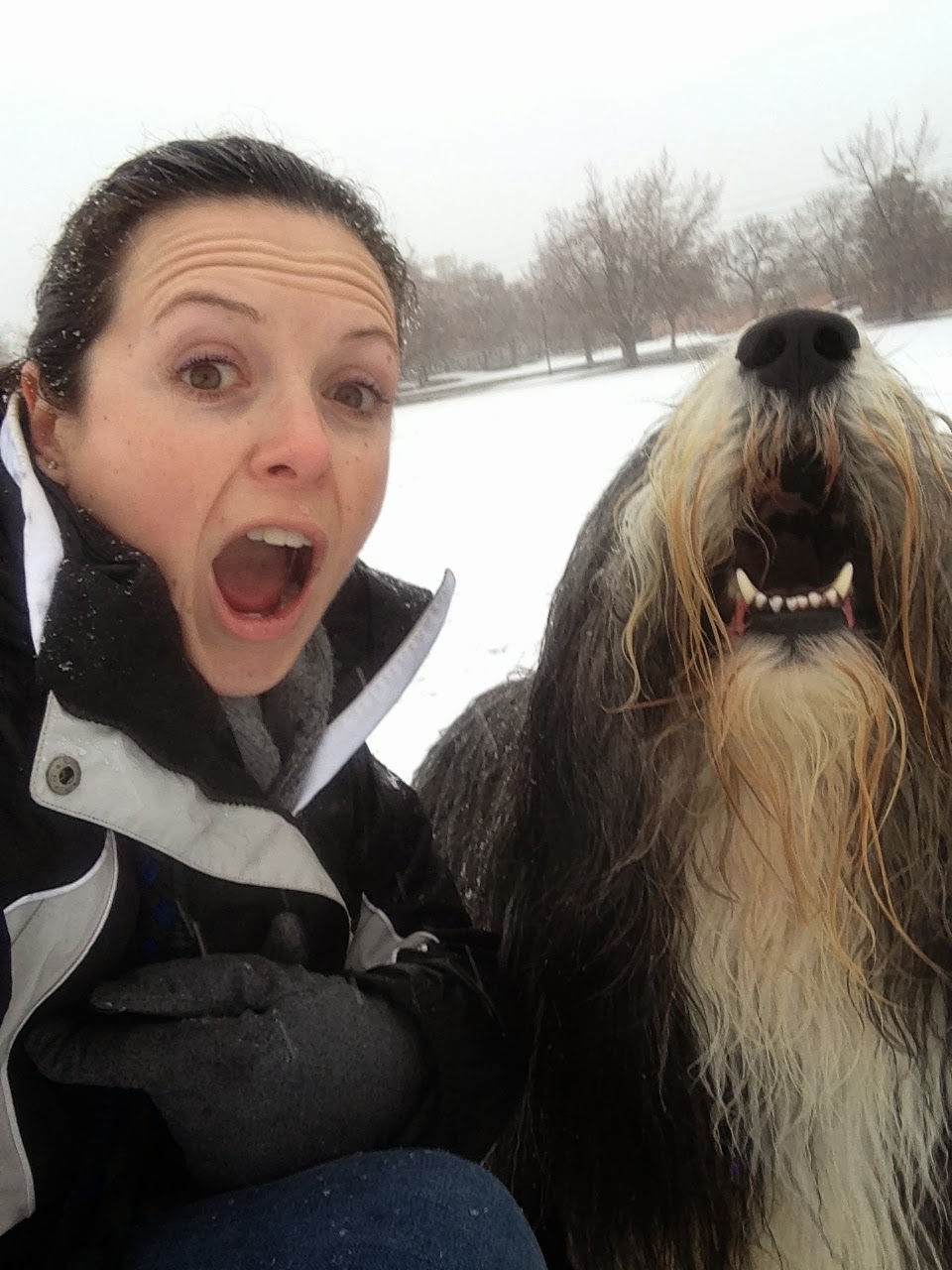 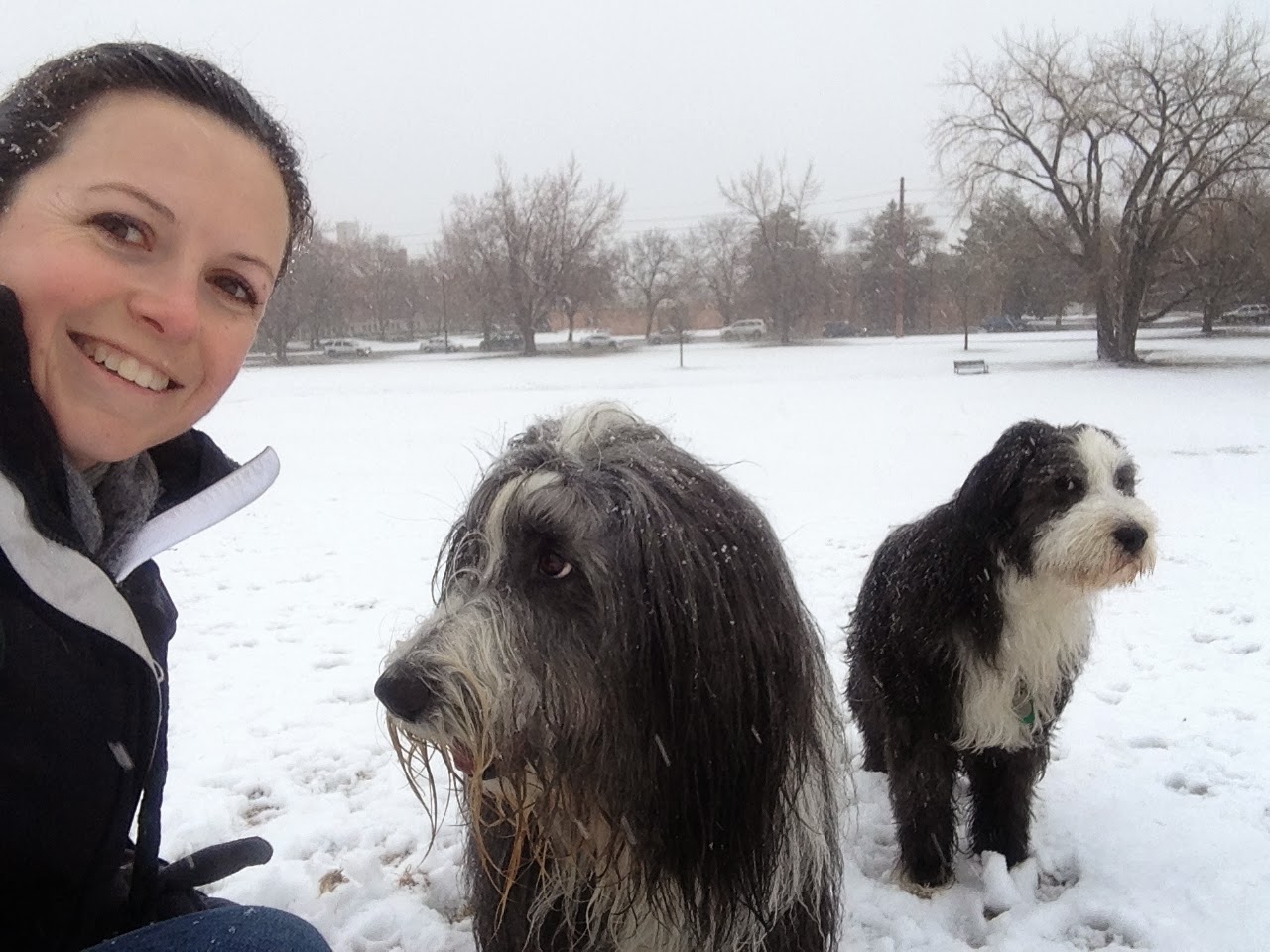 It was all melted and sunny and beautiful and warm Saturday.  Because Boulder winters rock.
Posted by Molly at 8:00 AM 4 comments:

Yeah, yeah so it's taken me 2 weeks to get around to writing the report of a race that took just a little over an hour…grad school life is exhaustingly busy. As it is I've missed talking to my husband 2 nights in a row because I fell asleep before the appointed hour.

Anyway…a couple weeks ago I rolled on out from Boulder down to Cherry Creek State Park in Denver for my first multisport race since moving to Colorado.  I've been riding indoors since, oh, the flood? So…it's been nearly 6 months since I biked outdoors.  Fun times.  We were lucky that it was a beautiful clear day and there was no snow on the ground.  It wasn't especially warm and it was VERY windy but I had a few layers on to stay comfy until close to race time.  Then I shivered at the start line.

The format of the race was a ~10.9 mile bike and a 4 mile run.  We went off in randomized pre-determined waves of 10-15 people every minute.  They started with wave A.  I was in wave R.  So there was a little waiting but it gave me time to spin my legs out and do a warmup run and roll on up to the start with my R homies.  I looked around - we were indeed a Random group, everything from me to some folks on mountain bikes to some CSU tri team guys.  I was pretty sure the collegiate athletes would drop me like a hot potato off the start.

They did…for the minute it took me to get clipped in on the downhill start.  And then…I caught and passed them?  WTF?  I figured from then on it was just a challenge to hold 'em off.  I hammered as hard as I could, uphill or down, and passed people from various waves ahead of me and wasn't passed too often.  We wound our way around the reservoir and back.  Finally, the end was in sight and I hopped off to run into transition.

Transition involved a long run in, drop the bike, run away with helmet still on (hey, it's FEBRUARY!  Thanks to the volunteer who grabbed it and put it in my spot for me!), run waaaaaaaaaay up a hill and finally cross the mat.

And then it was up up up the hill for a long time on the run.  I felt like complete ass from the start.  Welcome to altitude, bitch.  So I dialed my effort back and hoped my run would come back to me.  We kept on running up and finally turned onto a trail where we at least alternated up and down.  At one point I saw Peyton Manning jog by; I'm pretty sure I didn't imagine it.  Mile by mile I dropped the pace so that I negative-split the whole 4 miles.  Definitely not the kind of pace I'm used to for a sprint race but again it's February at altitude. 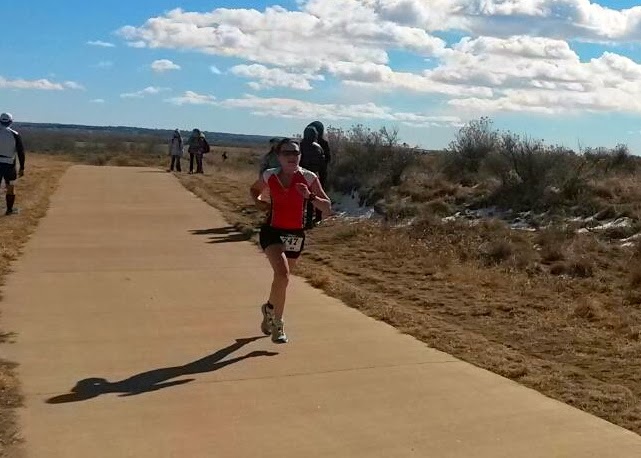 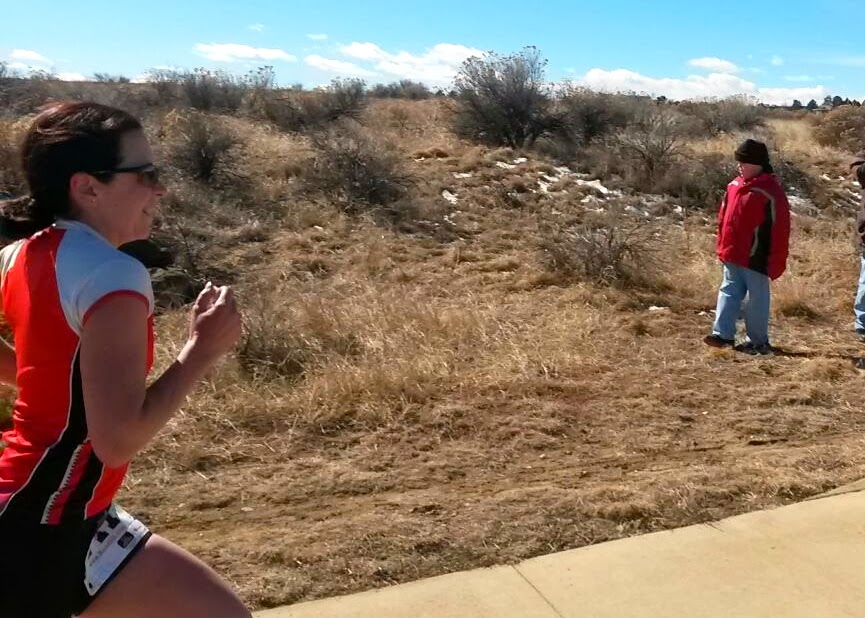 Tea showed up right at the finish from HER race to cheer for me and kick my ass into gear a little harder (and take pictures).  It worked, I chased down the woman in front of me by the end! 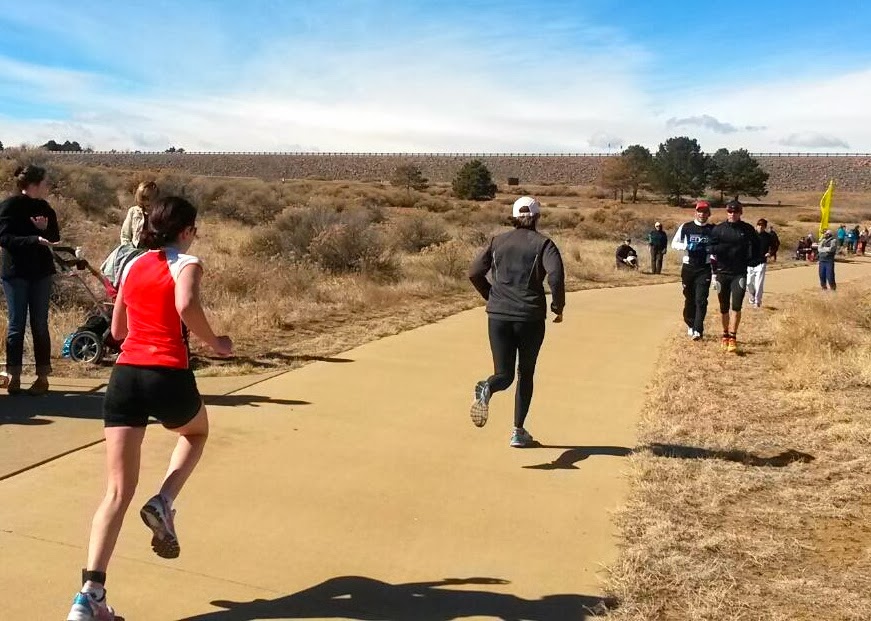