With a brief burst of warm weather in the middle of January, I managed to ride outside for a "real" ride (as opposed to my post-IM easy spins) since IM AZ.  I had some hills to do on the schedule so Jeff and I rode down to do the Hicks-Shannon-Kennedy loop in Los Gatos.  It's relatively short but has some good steep stuff in there (12% at one point going up Kennedy).  Given that my bike is still geared for AZ, I was a little nervous about the climb but ended up doing it in my fastest time ever!

I got to play with the new Scatter graph option in beta testing for TrainingPeaks ambassadors.  Most of my workout was scheduled around a certain wattage and my cadence held mostly in my target spot for those watts.  The really low cadences matched up with the higher watts I put out when climbing the steep hill.  Kinda neat to see like this! 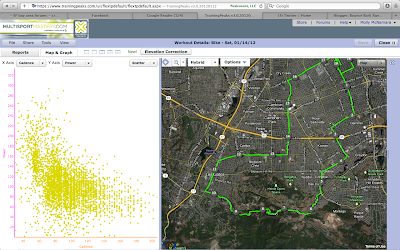 Look at that weather forecast...sadly it gets cold (hey it's cold for us!) starting tomorrow.  Another limited beta feature but it's pretty cool to compare in the same place with my current training plan! 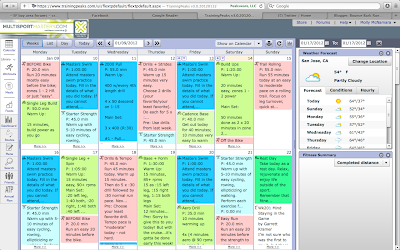 I'm happy that so far I've put together a really good training week - just one run to go!

YAY for a good training ride!

This looks more like work than fun... But I'm glad that you obviously rock your training.

Have a great new week.

Oooh I want that weather thingie on my training peaks.

Isn't beta GREAT -- trying out stuff as it's being implemented is awesome, thanks for sharing.