Because My Coach Told Me To Blog About It Already

Austin wasn’t the race I had hoped for.  Some race days are just like that, oh well, moving on, hello 2011 and all that :-)  Oh wait, you mean, really I have to talk about it? Well then let’s get this over with.

I was feeling fantastic going into race day – rested, excited, energetic and healthy.  The lake water was a lovely wetsuit-legal 72 degrees, I managed to get my bike reassembled properly, and my legs felt zippy.  All that you can ask for!

The good: I felt strong and smooth and unbothered by the relentless body contact of the mens’ waves behind me (I was groped so much I thought I’d changed careers).  Sighting was a piece of cake the way the course was laid out, with straight lines of buoys as far as you could see until each turn.

The bad: Speculation was that the course was long, based on everyone’s times versus expected times.  This was disappointing since I came in quite a bit after where I thought I should.

At least I am good at transitions.  We had to run up a LONG hill, remove wetsuits, and leave behind no gear on the ground (clean transitions).  I was shocked to see bikes still on my rack, and I got in and out before any of the women who were standing there when I arrived.

The good (miles 0-28): This course could in NO way be called hilly compared to where I live and train.  I flew through the first half of the course (the “hilly” half) going steady and easy as per my instructions to negative split the course.  I was on target to do just that since the back half was the flatter 28 miles.  My nutrition and hydration were spot on.  It was cloudy and calm, keeping the temperatures down.

The bad (miles 28-56): It got windy.  It stayed windy no matter what direction we turned, and there were LOTS of twists and turns on this stretch of the course.  Still, that wasn’t what killed me – it was the soul-sucking stretches of under-paved road that stole so much speed no matter how hard I worked as I bounced up and down in the air.  They wore me down.  They forced me back to my Ironman let’s-get-happy-on-the-bike song and so I spent nearly 10 miles singing 99 Bottles Of Beer On The Wall.  I knew I had to start singing when, around mile 45, I started wishing I’d get hit by a car to have an excuse to stop racing.  I pulled out every trick I had to stay positive, and it worked, but it didn’t make me any faster.

Again, I’d memorized what rack to run to, and I was through there fast.

The bad: What I had feared most came true.  A few miles before I finished the bike, the clouds parted and it got HOT.  I stepped out on the run course to sun, heat and high humidity (something we do not get at home at all).  We never got summer in Northern California this year, so I had no acclimation to these conditions at all.  The course was changed from what it was online when I signed up – it became 2 loops of all-hilly trail running (with limited pavement).  After a couple miles, I overheated badly.  I began to bargain with myself – run 4 minutes, walk 1 minute.  I could barely do that, as my heart rate would shoot up, I’d get nauseous and my side would hurt, and I’d have to ease up again.  I pulled a calf muscle and it hurt, badly.

The good: I hit every aid station for water to drink, water over my head, ice down my bra, sponges soaked in ice water to shove in my top and squeeze over my head, and Coke to get some calories into me.  Around mile 5, I started running again and realized I was not feeling so bad anymore.  I was able to run, albeit at a much slower pace than my goal (which was easily achievable for me) had been, for most of the remaining miles, with only a couple walks on the biggest hills.  I didn’t give up.  I didn’t quit no matter how many times I thought about it.  By a small margin, I negative split the run course.  I finished.

I thought about crying, but that seemed like a waste.  The fact is, I was trained and trained well for this race.  But sometimes shit happens.  A day spent doing something we love (even if I wasn’t loving every minute of it) should still be considered a good day.  And I’m reminded often that I’m lucky to be healthy enough to doing all of this at all.  There will be another race, another day, another chance.  And I WILL hit the goal I was shooting for.  And that’s all I have to say about that.

Except that I was lucky to end my day on a much better note, at dinner with good friends who live in Austin. 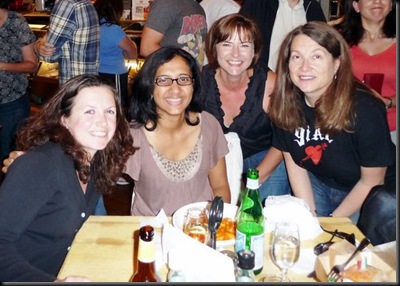 Yep, UGH! Sometimes it feels better to write it all out - just feels better. I know how this feels (of course) we ALL DO! And, you are right, NOT much we can do - but live and move on and get on (after R&R) with our races and goals for the next one. And, that fire will keep you moving forward!! :)

Thank you for sharing, I know it was painful, but I can't tell you how much it helps to read your posts on the good and bad days. Here is to some R&R and moving on to the next adventure! You're still a rock star :)

That title cracks me up!

But I do know very well what hot & humid weather can do to folks (even those of us who are used to it still suffer). Great job gutting things out and getting to the finish line. Weather may be unpredictable but one thing for sure, there will be more races!

I feel for you. I struggled with the race I was in this weekend also.
The heat does me in everytime. Good for keeping at it!

You blogged about it, you can put it to rest and look forward to an even stronger 2011 season!

Welcome to the off season! I tell you, my 2 weeks before my last race and the race itself was not what i had planned and i had to have a talk with myself to remind myself I was done and the season was fantastic!
I know what you mean tho, at Kansas in june we got some heat on the run and well...MN had highs of 70 before:( Enjoy sleeping in!

Sounds like Eagleman and Augusta for me... :-( C'est la vie... life goes on and you will be stronger because of it. Congrats on fighting your way through! Next year will be a great year for you!

Tell your coach that the only thing worse than reading a RR is writing one. Let's just pretend I read it ;)

Yikes. Bad organization and humidity. But keep the spirits up, you've trained and did the best you could under the circumstances. Next race will be fun.

Nice new blog design. Enjoy some time with the boys and the off season.

Congratulations on the finish - not every raceday is the best day or we would be bored (I like to think like this anyway). HA

Having run just two mini's you amaze me!

Thanks for sharing your day with us, Molly. That race sounds a whole lot like FL 70.3 (talk of a longish swim, baby hills on first part of bike course, trail run in 90F+ heat), which I wouldn't wish on anyone. Way to tough it out. Chip & seal road are the absolute worst. We train on a lot of those where I live and they are horrid, energy sucking traps.

OK- let's move on. You had an AWESOME 2010 season... truly awesome, with more PRs than anyone other blogger that I stalk. Chin up... you had an outstanding season! Congrats!

Ah well, not much you can do about the heat. I know how frustrating it is though, my one race for the year was hot and the run was no fun.

At least now you can enjoy an off-season.

You're day did not go as planned, but you finished. It would have been much easier to to blame the calf or give into the heat...but you finished! Great job. Now you're biggest task of the season is to ENJOY and RECOVER during the off season!

Wow. I am exhausted reading that. I hope your next race is as good as this one was not.