Oops…so much life went by since I started this post that it's somewhat ridiculous.  I'll chop it short to just cover the basics of the flood and try to pick up from there soon.  Rest assured, we are all safe and doing OK (and living somewhere new).

On Monday (9/9) it rained and we were grateful for a change in weather from the record-breaking heat we'd been experiencing.  On Tuesday it rained some more - ok, still a nice change, I'll just walk to work instead of biking.  On Wednesday it rained even more, and I was only slightly annoyed because Stanley had picked up a skin infection from swimming and rain made it hard to keep dry.  I gave him a medicated bath that day after work and dried and brushed him out.

Later on Wednesday evening, I Facetimed with Jeff until about 9:30pm and then went to bed, planning to attend 6am masters.  I texted him a photo from my upstairs window, expressing relief that my car was on high ground in the parking lot while some cars on the other side appeared to have puddles.
﻿ 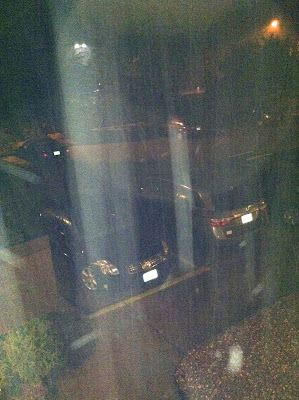 Within 30 minutes of my going to bed, I suddenly heard what sounded like tornado sirens going off at the street.  That freaked this California native out plenty and I raced around the house to collect the dogs and find a safe place to hide - that's when I heard the voice-over that follows the sirens, with a flash flood warning telling people to get away from the creek (we live about a block and a half from Boulder Creek).  Oooookay then, I guess I can go back to bed.  Texted Jeff video of the sirens, looked at Twitter to see warnings in place up the canyon, and tried to go back to bed.  It was hard to sleep because crowds of people kept walking by our place on their way TO the creek to check it out, go tubing on the rapids, etc.  When another round of sirens went off  and it seemed our neighbors were all out front, I popped my head out the front door and was surprised to see the water rising under my car and streaming down our sidewalk out front!  That had risen in a hurry!

I called Jeff in a panic - do I leave my car there in the flooding and stay here with the dogs? Do I load them up and try to drive for higher ground (I was thinking we could drive up the hill to the CU campus and sleep in the car)?  I was paralyzed and Jeff wasn't really sure what the right answer was either.

Then one of the neighbors let me know everyone was moving their car across the street to higher ground.  So I ran out in shorts and a sweatshirt with flip flops, waded into the water, and drove across the street to park.  Waded back through deeper fast moving water, came home to the dogs, and saw clearly that it was a matter of just minutes before the water reached our doorstep.

I ran around the house trying to put low-lying things like dog toys and towels on higher objects, unplugging cords and then washed my legs to avoid any infection from dirty water.  Then with the water at our doorstep, I locked up and went upstairs to hang out the window and see what was going on with the neighbors.

As it turned out I'd missed the word going around that the water levels across the street were rising too.  A neighbor was leading a caravan down to park at the mall.  I threw clean dry sweats on, waded out and across the street, trying not to get knocked over by the fast moving water, and jumped in my car to drive over to the mall.  Everyone had gone ahead of me so I saw no other cars from our complex headed over...I got lost driving around the mall and eventually found my way to the top of a parking garage by Macys.  Luckily, one of the neighbors spotted me and swung back to give me a ride home.  That 1/2 mile was quite harrowing with the streets flooded heavily, cars abandoned/stuck on the center divider and waves from Boulder Creek cresting over the bridge onto the road.

I waded back across the street, drenched again, and into my house (at about 1:00 am at this point) which was starting to flood.  I called Jeff to let him know I was home safe again, washed my legs again, put on warm dry clothes to stop shivering, and tried to hunker down with the dogs upstairs.  Of course, after that much adrenaline and knowing your downstairs is filling with water, it's hard to sleep.  I kept getting up to check on the water levels, or stick my head out the window and talk to the neighbors, or text Jeff as the creek sirens kept going off, or check Twitter to find out what was going on (I'd unplugged my appliances downstairs, including modem and TV).  It's also hard to sleep when you hear the sound of rushing/flowing water in your house.

Several of the scarier moments came when I saw things on Twitter like:
"Residents of 4 Mile Canyon, run for higher ground now, run for your lives, don't drive, climb as high as you can immediately."
and then later
"City of Boulder declared impassable, all units retreat to higher ground."

My downstairs, in the middle of the night... 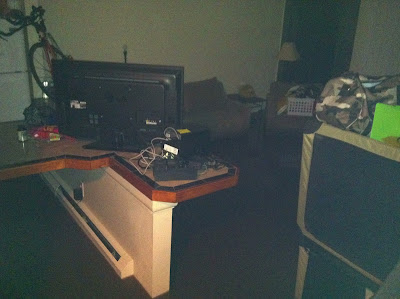 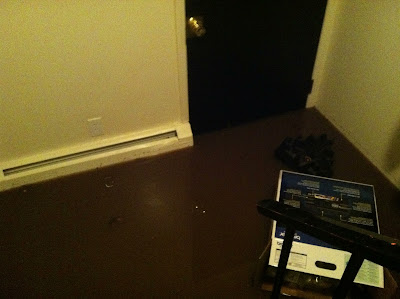 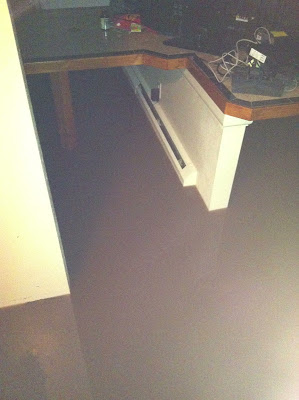 Finally around 3am, when it seemed the water would not rise any further, I curled up with both dogs and fell asleep for about 90 minutes.  I missed a text message from Jeff and several more warnings from school and the city.

Morning view out our windows, after water was being pumped out by maintenance 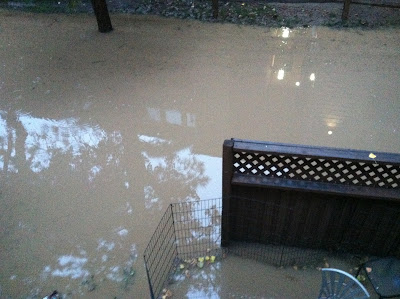 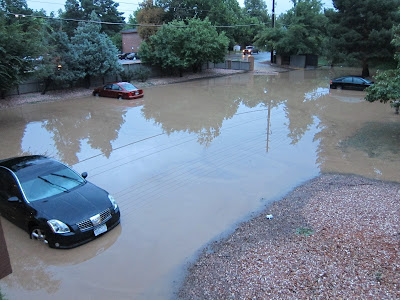 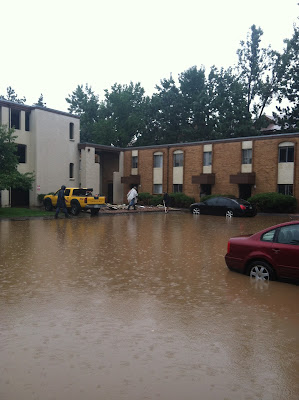 We were lucky our landlords sent crews to start pumping out water right away…I was carrying my dogs out over my shoulders through the floodwaters to potty at the street level and that got hard after a while.  But I didn't want them tracking in floodwater and mud upstairs.

Jeff caught the first flight he could to Boulder, I moved what I could upstairs, and we met up at a hotel. I was completely exhausted from the lack of sleep and it took all weekend, as he helped me clean up, to try to recover.  I was lucky school/work was cancelled for Thursday and Friday.  I am also SO grateful to my friend Kim who watched the dogs for me all weekend while we mucked out the apartment. 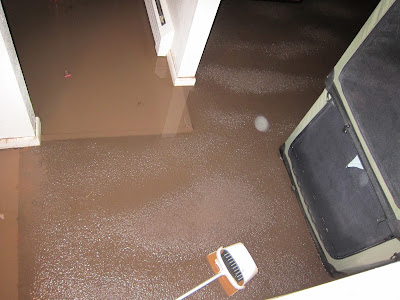 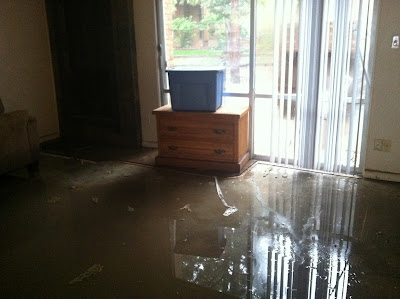 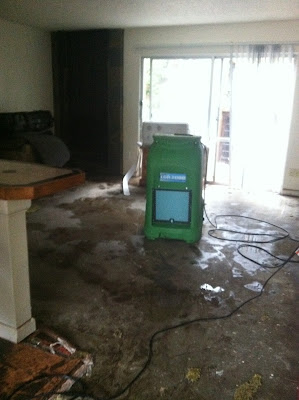 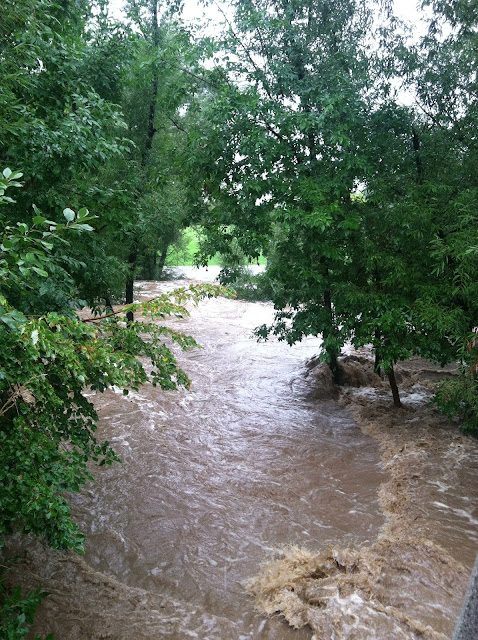 When I sent Jeff home Sunday morning, I figured the worst was past.  The wet carpets had been ripped out, we'd trashed all my downstairs furniture that was damaged, and the apartment was already dried out - things were well on their way to cleaned up.  The upstairs was unaffected so the dogs and I could at the very least huddle up there and live reasonably well while the downstairs had new flooring put in.

Little did I know things were still going to get more complicated! 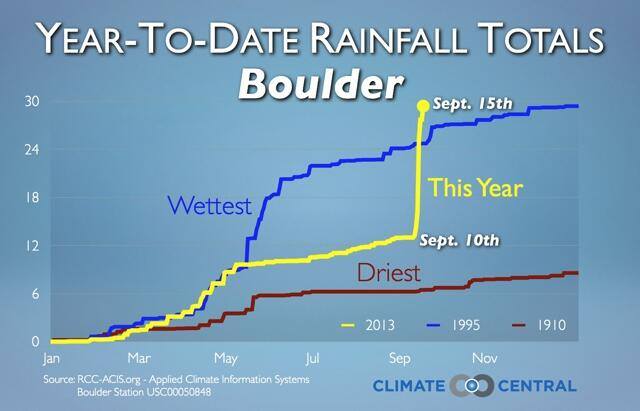 Not quite the Welcome to Colorado that you deserved. fingers crossed that things start going a little smoother.

I love that you moved dog toys to higher ground! So funny!

Glad you're OK! What a nightmare.

Completely terrifying. Even more so now that I get to see it all laid out in one place. Glad you're ok.