When I left Boulder last Saturday morning, after a 3:45am alarm (HOLYMOTHEROFGODITSTOODAMNEARLY), it was -5 degrees out.  We'd been dealing with a weeklong cold snap that necessitated boots and coats for dogs for every single walk plus a ridiculous amount of bundling up for me. Every. Single. Walk.  For the most part I was just grateful I made it to the airport without encountering any ice.  And to think I was flying somewhere where everyone had been complaining about cold…compared to Colorado, I was looking at it as t-shirt weather (more on this later).

I flew to Phoenix where Jeff and Puck picked me up and we road tripped about 90 miles down the road to the Tucson area.  Got through the line at the busiest Starbucks ever, spent 5 minutes at packet pickup, had lunch and spent the afternoon relaxing in our hotel.  All the while eating and eating and trying to keep to bland white foods (I am not very good at this).  I had an early dinner and was off to bed around 8:30, with yet another 3:45 alarm on tap.

I practice my pre-race routines for every long workout so they really don't tend to be stressful or different for me on race morning.  I applied sunblock, lubed up, dressed, put my new throwaway sweats on over my race clothes, and started chugging caffeine as Jeff drove me to the high school that served as the bus depot for transit to the start line, way up the back side of Mount Lemmon.  I made friends with my seat mate who was doing her very first marathon and was very nervous.  I wasn't nervous at all, but I knew I was trained and ready for this and I had a very good idea of what kind of PR we were talking about.

It was not especially warm at the start, probably 28-30 degrees with a STRONG wind and an occasional drop of something frozen from the sky.  I reminded myself that I've done all my long running in Boulder in a sports bra and a pair of shorts, even when it was 35 or 40 degrees out, and this was WARM compared to when I left!  Eventually it was time to line up at the start - I set myself up around what seemed like the appropriate pace groups, took off my sweatpants, and decided to keep my fleece till the 1st aid station.

An anthem, a little fanfare, and we were off!  The first few miles were pretty fast as we were rolling up and down but mostly down, and the pace group leader took off like a bat out of hell, at a much faster pace than the time goal she carried.  Still I kept the effort feeling easy and backed off - with 90% of the pace group - when it didn't.  By the aid station at mile 2, I was ready to shed my fleece and settle in for the long haul. 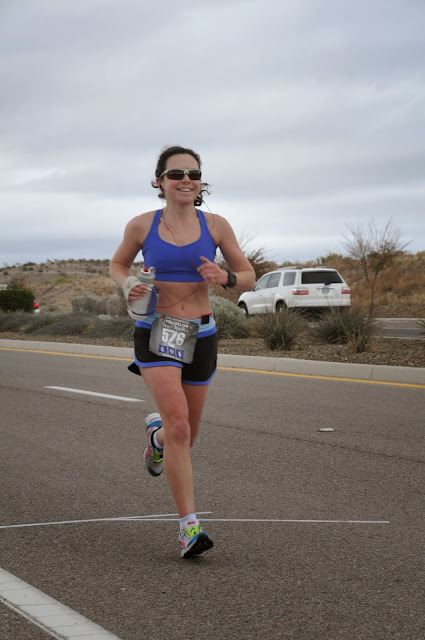 Just before the 10 mile mark, we took a turn onto Biosphere Road and began the long slog upward to turn around at the gates of the Biosphere.  As I got closer, I wondered what had happened to that 3:40 pace leader.  I saw the 3:30 pace leader go by the other direction when I was nearing the turnaround and 30 seconds behind him there she was!  Um…pretty sure you aren't supposed to be that far up the 3:30 group's ass at mile 12 - no wonder she'd lost everyone that followed her! 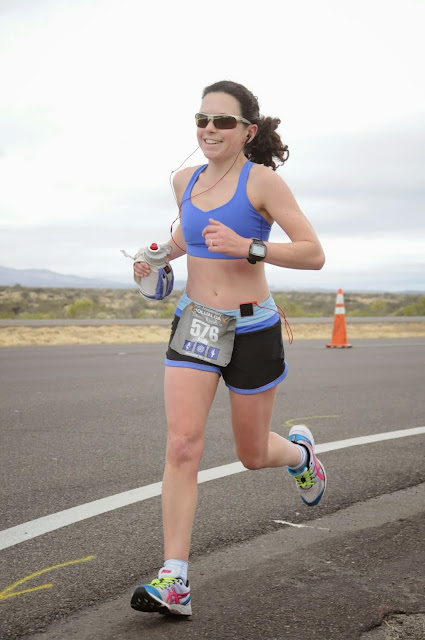 We turned around at mile 12 and rolled up and down back to the highway, reaching it a bit after the 13.1 mile mark.  I was probably at my lowest point here…stomach feeling a bit queasy, legs tired and just tired of running into the darned headwind!  I made a restroom stop around mile 15 and upped my water intake - both things I think paid off down the line.  I should add despite the wind and all I was never cold! I got a lot of funny looks for not wearing as much as everyone else but I was comfortable and it was probably like 45 most of the day - WAY warmer than where I had come from!
Miles 11-15: 8:44, 8:52, 8:26, 8:42, 8:35

From Biosphere Road I knew we had about 7 miles before we turned off the highway.  My legs were starting to hurt - A LOT - but I just focused on strong form and keeping my cadence high.  "Your legs are going to hurt regardless. So make them hurt faster." The wind continued to be strong in our faces and where possible I drafted off big dudes.  Still it seemed like no one was quite going my pace - either I passed them or they surged past me and then I would repass them at aid stations.  The road rolled up and down and you never quite could tell what was coming off in the distance until you got there (the joy of open desert scenery).
Miles 16-19: 9:06, 8:25, 8:46, 8:44

Right about at mile 20, something awesome happened - I started feeling FABULOUS.  I may not have been moving a whole lot faster but I got a smile on my face and I started passing a lot of people.  I knew there were still some tough parts to go but I was on the home stretch.  I knew on this newly revised course, there was a steep hill coming around mile 22.5 but I couldn't see it - then we turned a corner and OH YEAH that's a big one.  Still it was not all that different than this one hill I ran all fall on the Boulder Marathon course, back on dirt roads near Nelson Road.  So just control breathing and pace, lean forward and keep running till the top - where I was rewarded by a lovely downhill that I absolutely hammered (because why not? only 3 miles to go and it's not like I'm saving my legs for anything!).
Miles 20-24: 8:37, 8:46, 8:54, 9:05, 8:47 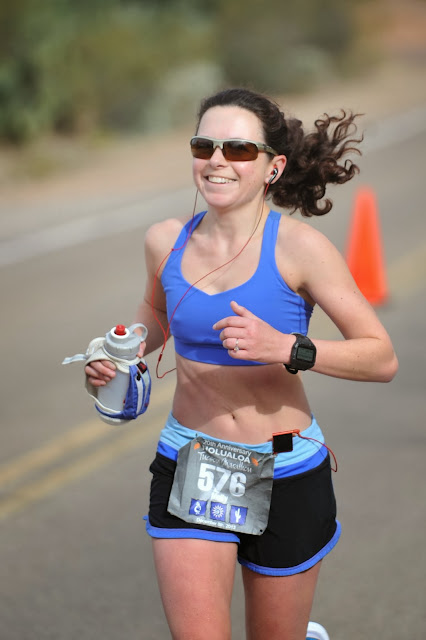 The last couple miles were not the most fun but I knew I was almost there and Jeff and Puck would be waiting for me at the finish.  We also caught up with some of the 19-milers and half-marathoners at this point so the course got busier.  I just kept looking for that last turn!!!  Finally I saw the crowd and the turn into the fire station for the finish chute.  I spotted Jeff and Puck up on a grassy hill (I had promised to not talk to him when I saw him or Puck would notice me and probably rip Jeff's arm off trying to join me on course) and gave him a quick wave as I went by.  Just a few more seconds of running and I was done.
Miles 25-26.2 (or, um, 26.32 if you're me): 8:50, 8:46, and an 8:28 pace for the last 1/3 of a mile. 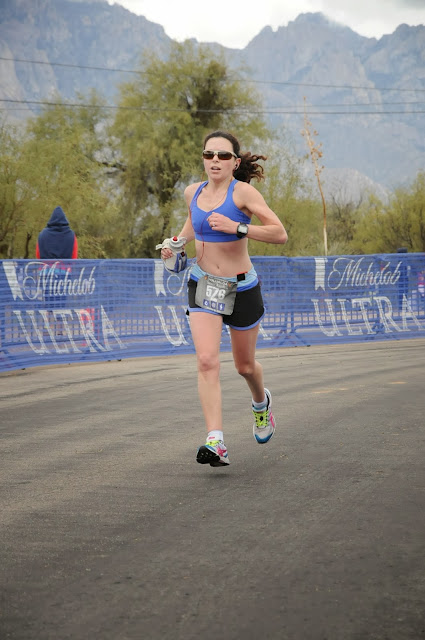 I knew it was going to hurt and it certainly delivered - but Coach and I have worked long and hard on mental management of pain and it paid off.  Given the changing terrain of the course, my effort was steady and I stuck to my plan well - I knew the downhill miles would be fast and the uphill ones not so much so I conserved well.  That is BY FAR the best I've ever run after 20 miles in a marathon/IM marathon and Coach was in my head all the way keeping me strong and focused.

I hobbled the 1/2 mile to the car (and I'm sure provided much entertainment to spectators) and  Facebooked right about that time: "No. More. Marathons."  Jeff graciously handed me a chocolate milk and drove me back to Phoenix, where I had time to shower and have a meal before my long-delayed flight.  First burger in months, for the win!  With that, the off season is officially upon me!  I'm doing my best to only eat 4 food groups - beer, bacon, cheese and chocolate.  It's a tough job but someone has to do it.

Thanks for all the well wishes!!!  I thought about each of you (and your predictions haha) as I ran.  Of the people who didn't know insider info like my training run times (and my 1/2 PR of 1:44 from a 1/2IM in 2012), Krystyna was the big prediction winner!

PS - this past weekend I got a message from a former tri club teammate who said he ran a trail race with a girl who had run Tucson the weekend before and she mentioned how cold it was and there was this one crazy girl in a sports bra. A blue sports bra! Hahahahahahaha.
Posted by Molly at 4:48 PM

Congratulations again on that huge PR! And those four food groups are something I could get behind. Enjoy!

You look fantastic in every photo! Quite envious!

So stinking proud of you! Congrats on a huge, hard earned PR.

Although, I must admit I wish your off season was slightly longer, it makes me feel better about the crap I'm eating :)

Congrats on such a huge PR!

Very happy to read about your success given how many things have changed in your life these past few months, professionally and emotionally. Certainly quite a roller coaster ride. Fabulous job!!! Enjoy those food groups :-)

Congratulations crazy sports bra lady! What a perfect race for you! It's so awesome when things come together and you have fun!

Molly, that is a huge PR!!! Congratulations on an amazing race! Mental management of the pain...that is definitely something I need to work on. Enjoy your off season!

Congrats, sounds like an awesome race!!! And love the pictures - I wish I looked as happy in all of mine :)

What a great race - congrats! And the photos are awesome (any race with good photos = win)!

You are a rockstar ! And you take amazing race photos !