Thursday night was cold and cloudy and windy so what better thing to do than go jump in a lake for a race?  Hmmm, so maybe staying home bundled up would have been smarter but we triathletes aren’t always known for common sense.

A lot of my friends have always done the Splash & Dashes but I’ve never made it to one.  It’s a nice small local race series with a lot of fast folks, a casual environment (only want to do 1 loop of the swim? OK!), a few tables on the boat dock for transition, and perfect finish line food.  And for icing on the cake, I got to see Melissa who was there spectating!

For me, this was really about getting more open water practice.  I would also be testing out a new wetsuit.  I’ve always swum in the Xterra Vector Pro suits and had been doing some reading about wetsuits and decided to take the plunge with the blueseventy Axis, with the hope that it might be more complimentary to my swim form.  The biggest difference I noticed right away was it was a LOT harder to put the new suit on – my old suit always slid right onto my body and I wondered what everyone was always complaining about with fighting their wetsuits on.  The new suit fit like a glove but it took serious effort to slowly work into place.  So tell me, is this normal and indicative of a better fit?

This was the warmest we were all night. 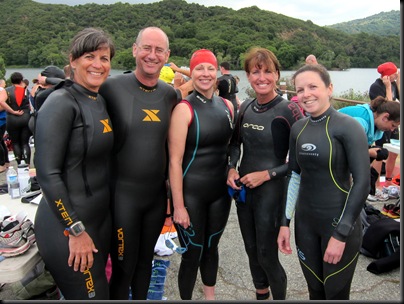 The lake was nowhere close to the athlete guide’s “expected 68 degrees” - more like 60, maybe…certainly feasible in a wetsuit but less comfortable when combined with the air temp and wind. 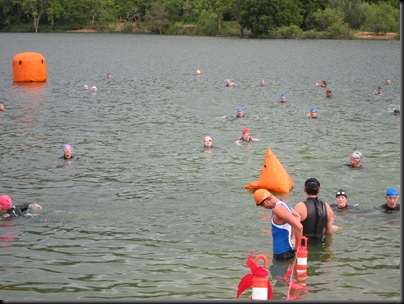 We swam 2 loops around the reservoir for a total of 1500m, or maybe a little longer as I kept having to swim around the rescue boat hauling people out of the water.  Everyone agreed it was a very choppy swim – hopefully I can pull off a faster time in a calm lake next week.  I was pleased with the suit performance on the swim, as I never got the sore achy shoulders I am used to in open water.  I swam almost next to my aunt for most of the 1st loop and then lost her in the shuffle around the turn for the 2nd loop/finish. 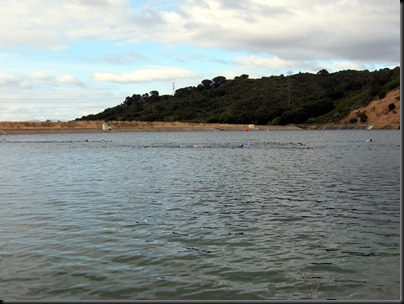 And then it was off for a 5k trail run that might have suited an Xterra course nicely.  There were 2 serious climbs along the way that left virtually everyone walking – one of them went up the backside of the dam so close to vertical that you could nearly reach your arms out to pull yourself up.  My thoughts on that: OW.  But I did have a pretty good run and zoomed past so many people who had faster swims – my run time was only about 3 minutes off of the fastest woman.  It was also great to see so many friends on the run course and high-five everyone as we passed coming back from the turnaround.  I ended the race STILL soaking wet from the swim (cold air does not dry you off well) and started shivering soon after that.

And then I was done. 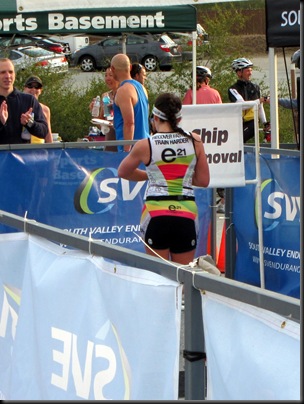 Like I said, this race has perfect finish line food – pizza and beer! 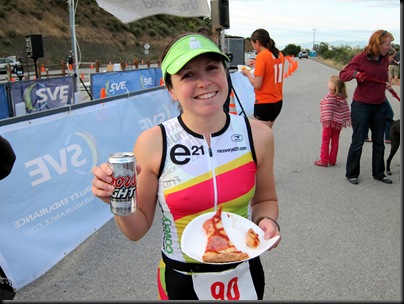 So anyway…this is a fun little race that gave me some good open water practice and one serious hill/speedwork workout and a chance to see tons of friends and family on the course!  And now that I know the course, I’ve got a time to beat when I do it again next month.  But I sure hope summer has arrived by July because I’m not sure I can take shivering the whole way home again.

Great job in your race! I can't believe for once we have really hot weather and yours is not! Anyway - the wetsuit - I'm just guessing here but if your old one was easy to get on it was probably WAY too big. It takes me like 20 minutes to get mine on and it's pure torture!! :)

Mike was there too. He said the swim was tough and long and he's a great a swimmer, so when he says that? Well, I'm glad I didn't take the plunge, so to speak.

Nice job! beer and pizza are the best. I wish we had some cool, it was 103 here today, the heat index made it higher, but it was too depressing to take note of the number. Cheers!

Oh Brrrrrrr! Nice job though Molly. So, will you be going back for more? :-)

Oh, that pizza smelled sooo good and warm. Good to see you and you did a great job for Juneuary!

that pizza looks amazing! great job out there molly! congrats on a great race.