What a long day for “just” a sprint race.  While it was nice to sleep in a bit, I may not be the biggest fan of these afternoon-start races – there is simply too much time to stress and worry and kill off before you can get your butt in gear and RACE!

I did have time to wander around transition and take pictures though, while I waited waited WAITED for something to happen. 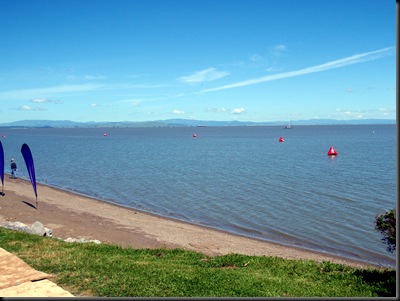 Near the end of the run course 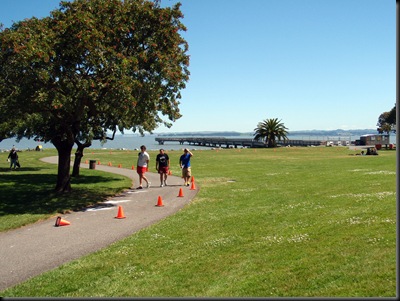 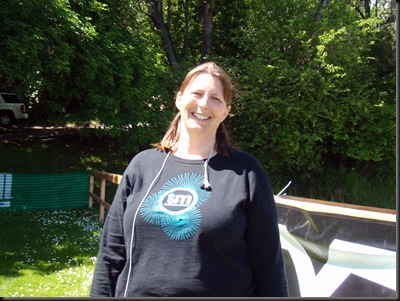 And then I handed my camera and Blackberry (for Facebook updates) over to Jenn, my dedicated spectathlete (shouldn’t every race come with one?), for the duration of the afternoon.

Heading to the pre-race meeting 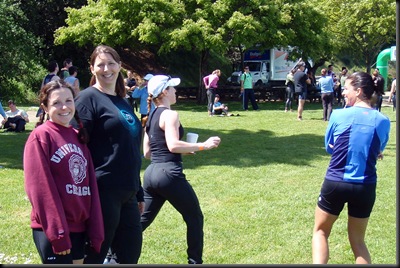 Finally it was time to DO SOMETHING!  My plan for eating in advance of the race worked out well – no stomach issues and enough energy through the day.

Headed to the swim start 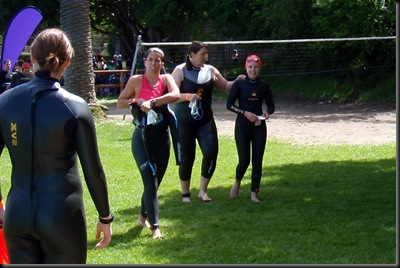 Swim: After a long warmup (what a joke of a word) in the very cold bay water, we lined up on the beach for the start.  I watched the wave of men 5 minutes ahead of me hit the first turn buoy and all run over each other, so I set myself up a little to the outside of the pack as we waited.  And then, we were off!  Run for the water and jump on in.  I am SO glad that I warmed up in advance or that cold water would have been quite the shock.

Everyone always talks about the OW swim feeling like being in the spin cycle with bodies all over.  I’ve never had this experience, because my wave usually drops me 20 yards into the swim.  Today? Not so much!  Not only did I exit mid-pack in my wave, I passed at least 2 men from the previous wave!  HUGE improvement for me!! 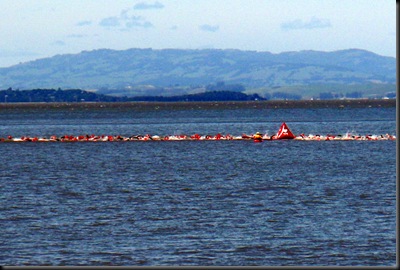 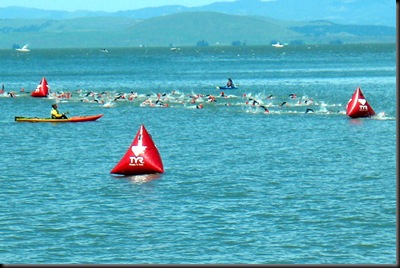 From the water, we had to run up a hill to the timing mats and then on to transition.  I sprinted through this section pretty quick and had to duck around people walking in transition to get to my setup. 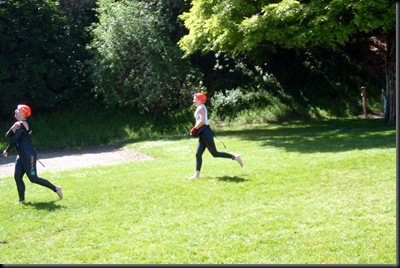 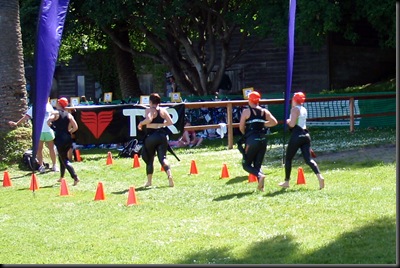 Melissa had a fast swim as always and looked strong headed to transition! 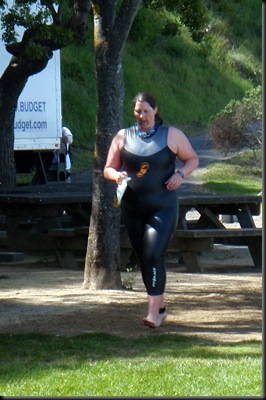 T1: It *felt* like it took forever to get my wetsuit off but my transition time wasn’t too bad.  I should have taken an extra moment or two just to catch my breath though.

Bike: I ran out of transition and promptly lost my balance and crashed at the mount line.  Nothing major, bloody knees and some really bruised palms, but not exactly the start I wanted!  I made it up the steep hill out of transition, caught my breath, wound my way out of the park, turned onto the main road, and promptly dropped my chain, front and rear, in such a way that pulled my rear derailleur into the wheel spokes.  It took 10 minutes for me to get everything sorted out and back on the road, covered in bike grease and unable to use my lowest climbing gears.  But I was able to get through the bike leg, averaging a little under 18 mph.

T2: Finally off the darn bike and off on my feet in a hurry.

Run: This was a reasonably strong run, not far off the pace I expected.  Despite the bumps along the way, I tried to stay positive and push.  The steep stairs and dirt trail climb out of transition were not pleasant but once on the flats I settled into a good pace and picked it up at the end for the finish. 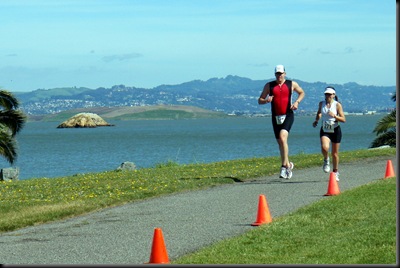 Still trying to keep a smile about the whole thing 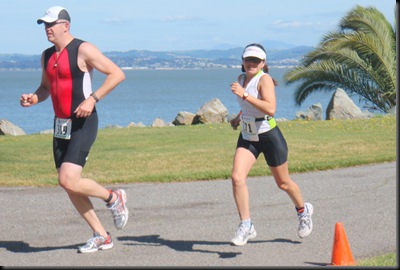 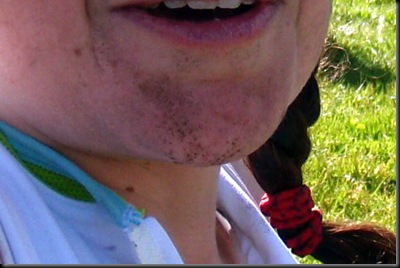 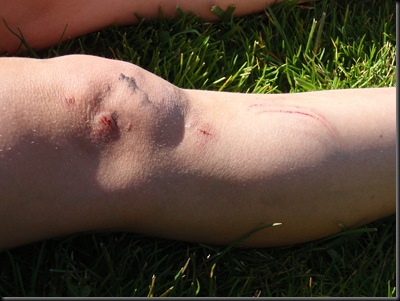 I flopped in the grass post-race and cheered Melissa in off her run. 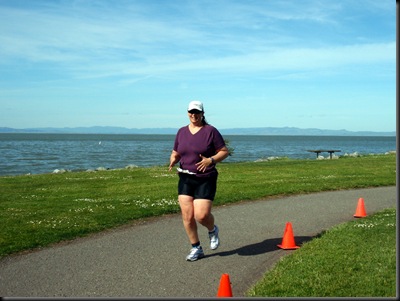 In the end, I was 15th out of 46 in my age group.  I would have been pretty happy with that had I not seen that my lost 10 minutes would have brought me 2nd place!  Still though, it was the first race of the year, a great chance to get my feet wet in the sport again, and a good learning experience.  Plus, if I got the bad stuff out of the way now, I can hope for smoother sailing in my bigger races.

Done!!! Heather, Melissa, and me 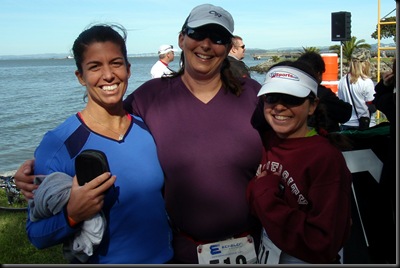 Nice work, lady! I've had a crash in a race before (concussed and all!) so I know how frustrating it is, but it feels so good to finish. Well, it didn't feel good... you know :)

Awesome job out there today! Congrats!

Woo hoooo!!! Yeah - what a way to open the season! I'm SO PROUD of you - absolutely fantastic! Sorry about the mechanical stuff - dropping a chain is NO GOOD! BUT - you got it out of the way AND proved that you can remain cool and calm under pressure. :) NICE! It's going to be a fabulous year, I know it!

Congratulations, Molly! What a beautiful day it looks like you guys had! It was SOOOO foggy for our swim start that it was difficult to see from one bouy to the next.

Your photos are absolutely amazing. Is that the Olympus camera again??

Way to rock your season opener! Feels great to get it out the way and move on, huh? I bet you're revved to go like I am!

Way to go Molly! What a way to start your season!

YAY!!! Look at you go!! Great job overall..but especially on the swim--I know you are always working so hard on that one!

Congrats to you and your friends. Hope you enjoy your rest day...you earned it!!!

Eek. Nice work pushing through. I always dread crashing on the mount line...I'm bound for it to happen sooner or later.

Great job! Way to keep it together when you got thrown a curveball. Now you know that whatever race day throws at you, you can handle it. Congrats on the swim- I KNEW you were getting way better! Do you finally believe it now??

Oh and I'm jealous that you got the HOT PINK swim caps! Lucky. I had to swim in boring white. I wanted the hot pink!

Woohoo! Great job, Molly. Sorry about the crash, but it sounds like you had a rocking race anyway!

Great job miss Molly!! Sorry about the crash, but way to hang tough, have fun and kick bootie! Yay for your swimming improvement!

You guys are amazing! Great job :)

Way to go!! That sucks about your crash and your chain. OUCH! You're such a trooper though. Get 'er done and git goin'!

Great job on your race despite the bike mishap! I've had some mechanical issues too but never in a short race, thankfully. And way to go on your swim. I remember the thrill of not finishing last or nearly so in my wave. Good job!