Some people got nice relaxing holiday weekends…went on vacation, went to the beach, drank a lot of booze, watched their local holiday parades.  Me?  Of course not.  With Friday off work it meant I had even more free time to cram in Very Important Things.  Things like…

I set out with Jeff and Nigel for a 3-hour hilly ride in the Cupertino/Saratoga foothills.  We picked Jenn up 1 hour into our ride (she forgot her bike shoes and had to run home for them).  It worked out OK since we took her up one of the steepest hills I know (the back side of Mt Eden, almost as bad as the front side of Hicks Rd but shorter) just after that.  After I rode Jenn back to her car, I used the remaining hour of my workout to ride home (while Jeff hung out with Nigel and then drove home).  I surprised myself sustaining some nice speed on the flats on the way back.  1/2 mi from home, as I was looping around the neighborhood to finish my last 10 minutes of riding, I got a flat and a punctured tire from a giant industrial staple.

Once home I immediately headed out on a run.   10 minutes to build pace, 10 minutes at a pace that sounded completely insane, 10 minutes easy.  Somehow I held the instructed pace, though I won’t say it didn’t hurt.

Immediately post-brick, refueling needs were at critical mass.  We took the dogs to Willow Street Pizza for lunch and then next door to Willow Glen Frozen Yogurt.  A big hit in our house. 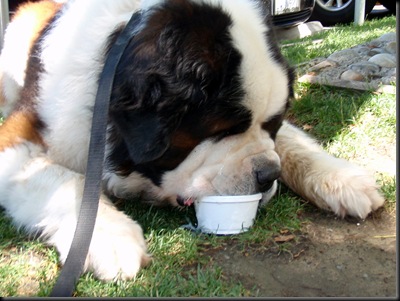 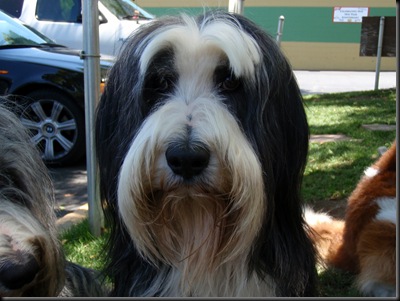 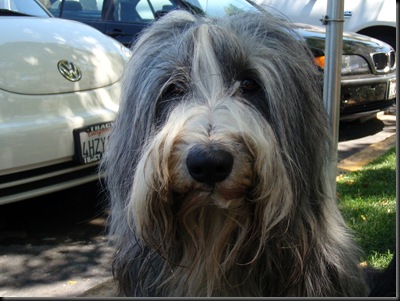 Nigel and I dragged Alex and Jeff to Santa Cruz so that we could do an open water swim.  The Santa Cruz Triathlon Club does great group swims out there and it’s good to have company.  No one seemed to be swimming the wharf this time, so we swam to a moored boat off-shore and then through a series of buoys before coming back to the beach. 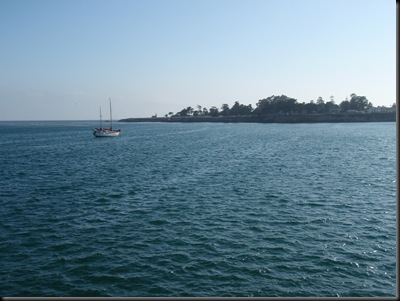 Post-workout recovery with Nigel of course means food and drink.  Or cross-dressing, as the case may be. 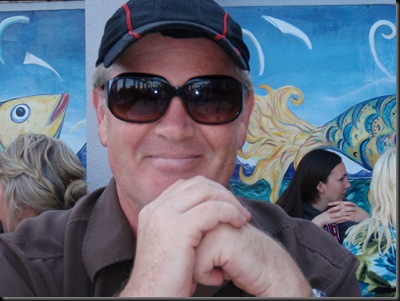 Suffice it to say, recovery food AND beverages were consumed. 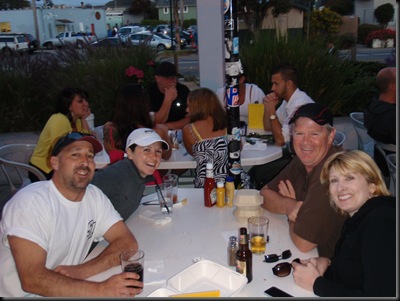 And if you want some entertaining series…click for larger shots.

Max and I managed to squeeze in one day of the Bay Team USDAA trial on Saturday.  He hasn’t trialed since early May in Carson City so I resolved to just have fun with him.  As it turned out he had some great runs (hit all his contacts in Masters Standard, had a nice opening in Masters Gamblers) and only one bobble (slipped and crashed on the broad jump in Steeplechase).  Best yet, on the last run of the day, he qualified in Grand Prix with an awesome fast run.  1 more of those and he’s qualified for Nationals (which conveniently enough are in Arizona one week before Ironman).

Sunday brought ANOTHER long ride.  This time we headed to Sonoma County to ride the Vineman course, which we’ll be racing in 4 weeks - Barb’s Race 1/2 IM for me, Vineman Aquabike (1/2 IM distance swim/bike) for Nigel and my dad.  It was the first time my dad and Nigel had ridden the course and I was excited to show them how beautiful it was.  My father hadn’t ridden 50 miles since our metric century back in April, but he did really well today! 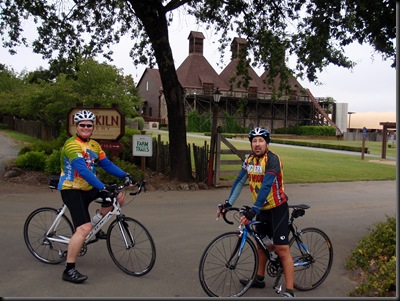 Sheep!  We saw (lots and lots of) cows, sheep, goats, llamas, emus, donkeys and more on this ride. 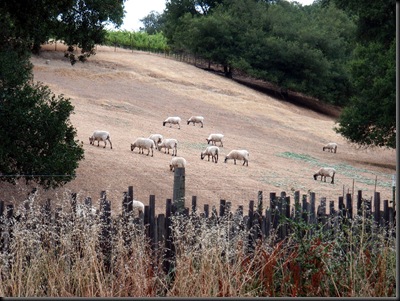 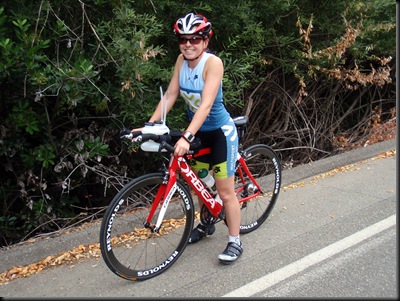 Rest stop at the awesome Jimtown Store (baked goods, restrooms, a water spigot for refills, and a bike rack!) 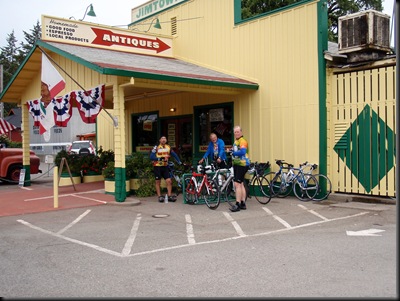 Dad, me, Jeff and Nigel – we look very colorful.  The boys rode all bundled up but I wasn’t cold! 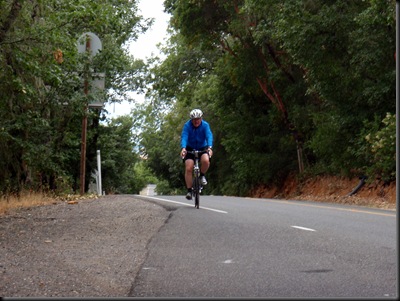 Finally cresting the top of Chalk Hill, knowing the miles to go are primarily downhill Jeff (who took the earlier shots and then rode back down) 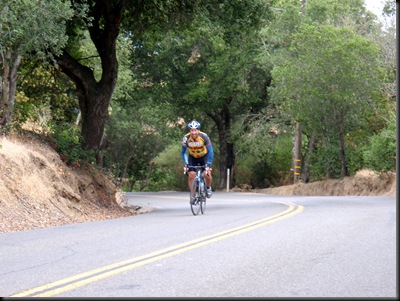 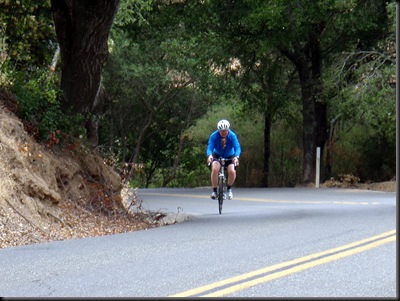 On our way up to ride, I dropped Stanley at Beth’s house so he could play with his sister and mother.  While I was riding up what felt like every hill in the county, my puppy was being tired out (and then Beth was nice enough to hose him off and clean him up again for me).  I think the pictures show how much fun he had (credit to Beth for the photos). 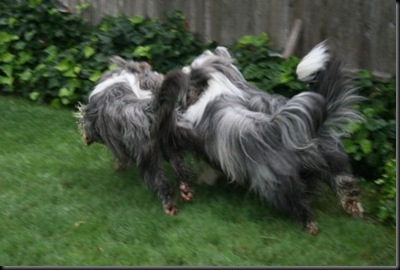 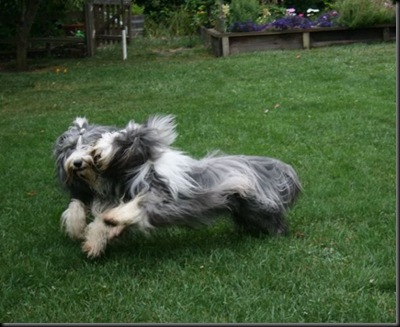 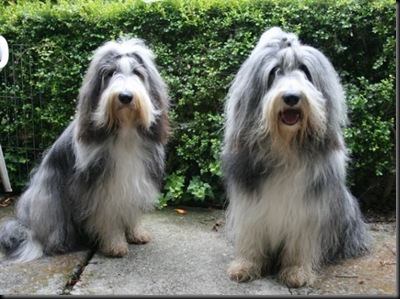 I survived BIG BIKE WEEK but I’m not feeling relieved just yet.  Next week’s training schedule, to be honest, scares the shit out of me.  My swims are ALL drill swims.  THREE of them.  My runs are hard, with pace instructions that make me hurt already.  And my rides are all power-based and guaranteed to be painful.  Someone will be mopping me off the floor by the end of next Sunday.

Love how the race kit looks! YEAH!!! Eat your drills. Like eating your vegetables.

Do one day at a time. Conquer one drill at a time. Liz knows you can do it or she would not have given it to you.

wow, what a weekend, did you manage to slip some sleeping time in there anywhere? love the dog/ice cream pictures!

Wow, you had a tough week!

I have no idea how you get so much done in a week! Congrats on an awesome week and I'm looking forward to hearing all about next week's training.

I love the Vineman course! I used to live in Healdsburg so we rode it all the time... Jimtown store... Too cool! :)
glad you got through the big week!! :)

Next time you need to stop at White Oak winery on 128--my favorite winery on the route. I soooo wish I could be doing Barb's race with you, but alas, I'll be here and tapering. Sounds like a good week, and you are faithfully "eating your vegetables!"

awwwww man... I NEEDED to race in my one piece this year, but the MM kit looks awesome!

Yup. Take the training days one at a time and focus on recovery! I haven't re-attached my arms yet from last week if you want to borrow them :-)

Wow, Molly, that sounds like quite the weekend! Nicely done on all of the hard work! The race kit looks great. As usual, I love the pictures of the pups!

You just keep knocking out one solid training week after another. I also like the sheep picture, it has that feeling like you snuck around the corner and caught them there quietly.

The new MS kit looks good on you. I heard from Stef that she was getting one but hadn't seen it before.