*No, not the nasty icky evil race Wildflower whichIwillneverdoagain, the outdoors growing kind. 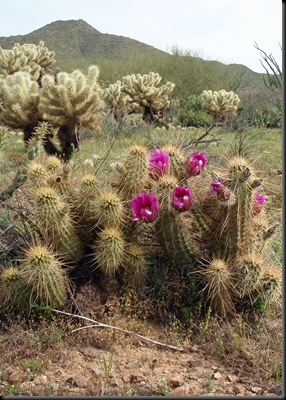 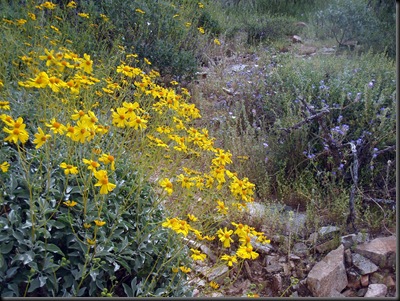 After a pre-dawn swim and some conference call action, Jeff and I headed to McDowell Sonoran Preserve for some trail running in the desert. 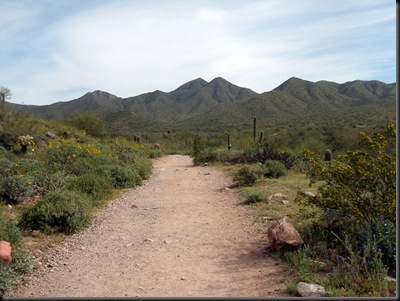 Less than half a mile into our run, we came around a curve, moved to the side to let a mountain biker flying down the hill go by, and came to a grinding halt.  The mountain biker had come on so fast, he’d surprised the heck out of this scaly critter.  Oh yes, that IS a rattlesnake and he rattled quite loudly his displeasure at us.  We took a little breather while he settled down and slithered off into the bushes. 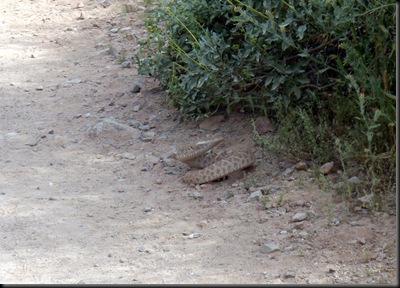 Everything was up-up-up and – you guessed it – UP! 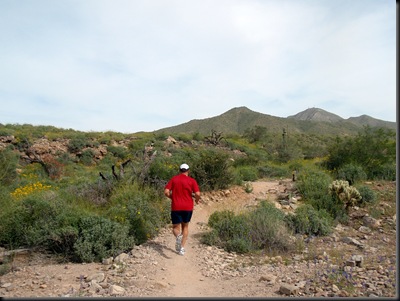 Partway up the trail looking back at the way we came 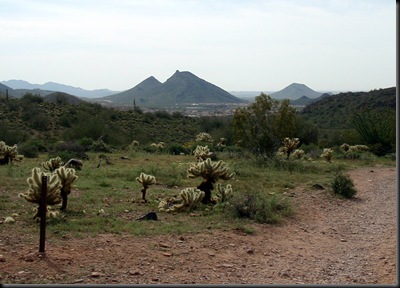 At the top of the ridge finally!  From there we continued on some steep downhills (I am paying the price for one particularly steep rocky section with knee pain – hello, ice pack!) and of course more uphill before we turned back. 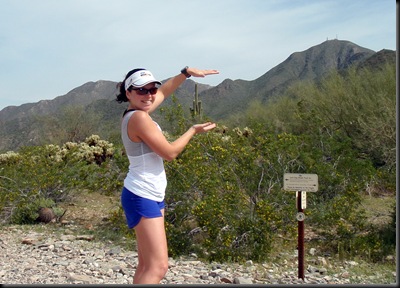 Hooray for downhills! Gee, is there enough cactus in that picture? 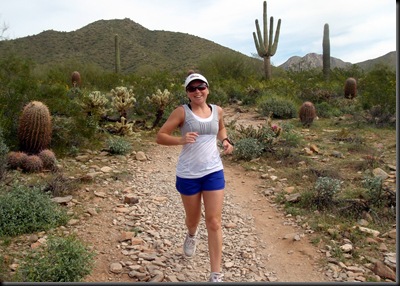 Thankfully we had some cloud cover today while running so it stayed slightly cooler than yesterday’s transition run.  I’m surviving a tough training week so far, woohoo for that!

In other news today I finally bought tri shoes for my bike to replace my old roadie shoes.  My goal for the year is to figure out how to get my feet out in motion and be able to run into transition without the clop-clop-clop of shoes on.  Anyone have tips on this?

Looks like a very scenic run. Its pretty booring and lacking natural scenery here in GA.

I really havent tried getting into the shoes coming out of T1, but getting out isnt too bad. I just practiced it many times in a parking lot. The loop they have on the back of tri shoes and the outward opening velcro make it not too difficult to pull your feet out.

It is gorgeous out there.

Sure there was nice scenery but there were also wild rattlesnakes! I would have turned quickly and ran faster than humanly possible back the way I came from. I work with boas and pythons a lot but I'm totally freaked by snakes in the wild - even garter snakes. You are very brave!

The Desert is always so beautiful in the spring! I can't wait to go at the end of the month.

You're an Ironman now. You should eat Wildflowers for breakfast and SNAKES for dinner :-)

Ohhh, I envy you that part of the desert. Yuma sucks so bad wildflowers won't even grow here! (btw, had a suggestion to get in touch with you re questions about coach-finding. Send me a note if you could? TY!)

I would have had a heart attack and had to be carried down the trail if I ran into a rattle snake!

What a beautiful place to run, though!