That was a mouthful!  (That’s what she said.  Har har har)

As a reminder, this was not an A race for me but a chance to just get out there and get some experience and try new things.  Some of them worked and some didn’t but overall it was a fun day!

New thing #1: I took First Endurance PreRace in my sports drink before the race start.  It looks like rather than giving me an edge or buzz, this contributed to way-too-high heart rates in the swim and early in the bike, as well as nausea heading out on the run.

My aunt and I were in two of the last waves (sprint racers went first) so we had time to put our wetsuits on in a leisurely fashion and watch the waves go off after we were kicked out of transition.  The race began about an hour after sunrise and things were warming up quickly.  I got in the water a few waves early to paddle around and warm up – as I slid off the bottom step into the water I bashed my foot on the rock wall of Tempe Town Lake.  It felt skinned but I didn’t really think much of it.

Swim: In-water start, heading straight into the sun.  I felt steady (and completely unbothered by body contact) but a little slow.  I ended up out of the water about 2 minutes slower than my Oly race last year. I think a lot of this had to do with not being able to see a single yellow buoy while swimming straight into the sun’s reflection off the water, but I’ve taken some swim video for Coach so we can work on my stroke as needed.

Gee, I look extra short behind that guy.  That’s my “hurry up move faster get out of my way!” face. 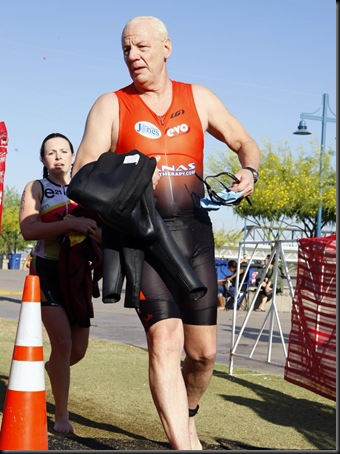 T1: Out of the water, straight to the wetsuit strippers and then a run through Tempe Beach Park to the transition entrance.  It’s no secret I pride myself on fast transitions – I had the fastest T1 in my age group!

New thing #2: Mounting the bike with shoes already clipped in.  Despite my practice earlier in the week, this could have gone better.  But eventually I did get moving.

New thing #3: My new aero helmet.  AWESOME.  Didn’t feel the heat at all on the bike and barely knew it was there.  Could have sworn it made me faster. 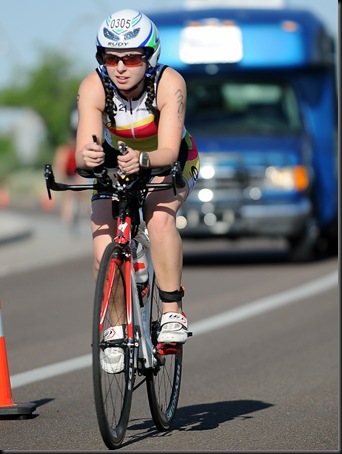 Bike: So by now you might have figured out that I very much enjoyed the bike ride.  The good thing about being a weaker swimmer and stronger in the other sports is you get to spend your subsequent legs passing people!  I tried to keep my power up at all times and not slack off when I had a tailwind pushing me faster.  In the end, I was rewarded with a 5 minute Oly bike PR! 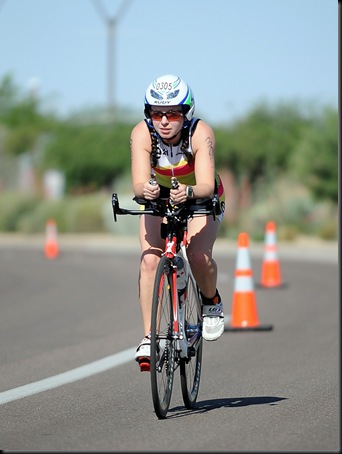 T2: Dismounted without shoes and raced through quickly.  2nd fastest T2 in my AG and if only my shoe hadn’t caught on my heel it would have been the fastest (0.6 seconds was the difference).

Run: And here’s where the fun began.  I think race day topped out at something like 97 degrees, so suffice it to say it was HOT when I headed out on the run.  I’ve never gotten off the bike feeling queasy before and we’re fairly sure this was from taking the PreRace.  In any event, I figured out pretty quickly that I needed to pace very carefully to avoid a meltdown. 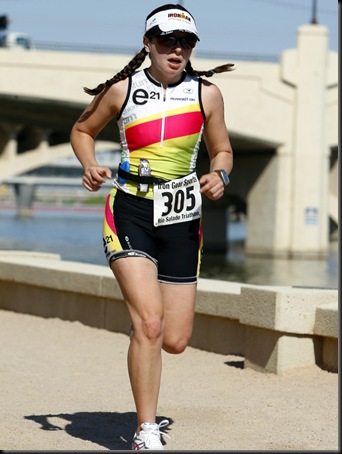 It was a 2 loop run so I focused on keeping my stride light and easy to keep my already-elevated heart rate from climbing any higher.  The course is mostly concrete with no shade so it felt even hotter than the official temperatures!  At the end of the first loop, heading over the Mill Ave bridge, I saw a woman sobbing on the roadside while EMTs administered an IV and took her off in an ambulance (turns out she was running in 2nd in her AG before she collapsed) – another reminder to be careful and keep drinking and dumping water over my head! 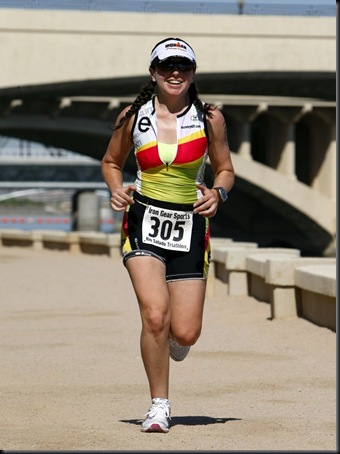 As I neared the end of the 2nd loop, on the Mill Ave bridge again, I finally caught up with my aunt finishing her 1st loop.  We ran together for a minute and then it was all downhill to the finish.  My run time was 5 minutes slower than my 10k PR, but I’m pleased at keeping it together – at a fairly even pace for the entire run - in conditions that had a lot of people walking.  My final finish time was only ~2.5 minutes off of my Olympic PR.

I was VERY happy to be done. 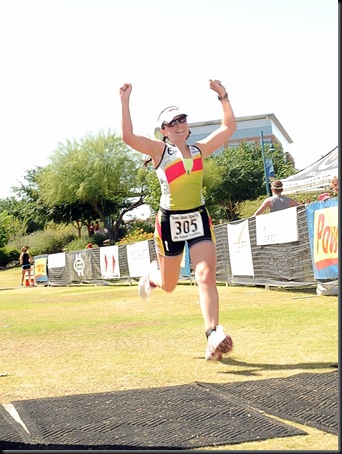 New thing #5: Racing with Recovery e21.  I took 2 capsules before the race, 2 capsules early in the ride, 2 capsules after an hour on the bike, and 2 more at the finish line.  I managed the heat much better than I’ve ever been able to and I was never sore from this race.

My aunt managed a 23 minute Olympic PR!!!  She’s worked hard this winter and it all paid off! 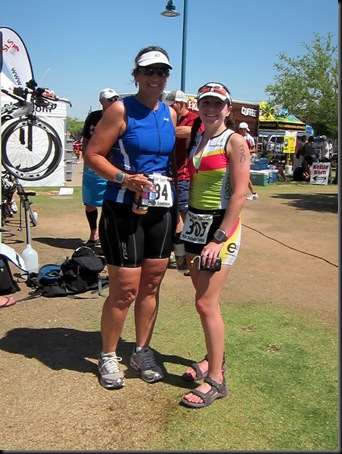 Post-race, I was amused to pull my running shoes off and find blood all over my foot.  I guess when I thought I just scraped it getting into the lake, I did a bit worse than that!  I won’t share the photos (you’re welcome) but let’s just say I gouged it pretty good.  It’s a testament to the heavy lubing-up of my racing flats that I never felt it, nor blistered, on that hot run, even with all the water I was pouring on myself.

So anyway, it was a fun race and I had a good time trying new things without too much pressure and enjoying some serious sunshine and heat and finally RACING!!!!  Thank goodness I don’t have to wait too long until the next one.  Thanks for your patience in waiting for this RR!

You look so cute in your kit!! Great race report! I clearly need to practice my transitions :-) I've got great long distance T-times, but not much faster for shorties! And, FYI on the heat. TEmpe is ALWAYS like 10degs hotter than it says it is. It just bakes down there so way to power thru!

Awesome pics and way to go. Your hair is getting really long....Glad you didn't hurt your foot too badly, and yay for Recovery E21 really helping you with stand the heat and soreness the next day. WOO HOO for you all the new things that worked. Glad the bike rocked!

First off, you look absolutely fantastic and wear that race kit well! Terrific pictures with lots of smiling going on! I like that!

This was a great race report and it sounds like although there weren't PRs all around, you gained a lot of valuable experience that will help you land those PRs later in the season. Extra kudos to you on that 5 minute bike PR. That's H-U-G-E! Way to go, Molly! Congrats!

Had to add... I really liked this part:

"I was never sore from this race"

Post- St. Anthony's was the only race that I've never been sore after... and I think it was due 100% to nutrition as well. I'm scared that I won't be able to duplicate it in the future; E21 sounds like something that might remove the stress from worrying about that.

your hair is so long and cute in braids! way to go molly, awesome job!

Awesome. You kept it together in typical Molly fashion and managed a well run race. Congrats.

congratulations, you look adorable in your e21 kit!! and I agree with Krista - tempe is HOT HOT HOT!

Congrats Molly!! What an awesome PR on the bike! (and I don't just think it was your new bike/fit :) Oh, I have that helmet too and I really like it also! Hope the foot heals up okay!

That is such a great finish picture! Great job on the pr.

Awesome job! I need to order some more e21 before IM--I swear they are what got me through the heat in AZ at camp. Great improvement on the bike.

Awesome job! Need to order more e21 for IM--it saved me in that AZ heat.

Great race, I'm glad you were pleased with your time. Weird for me seeing that bridge in the background for another race. I guess Ironman can't have a monopoly on it. :)

Congrats! 97 degrees is crazy for this time of year, you did fabulous with such grueling conditions.

97 F for the run, eek! Nice job though, the braids are the best!

Good Job Molly!I love your braids, i hope my hair gets that long someday!

You look like a pro! Great race report and an even better race performance. You really kicked it Molly congrats!

wow, nice job!! Love the fun pics... you look like you're having a total blast out there. Congrats on a good race!

oooh... a gash in Tempe Towne Lake is no bueno :-) Glad you didn't catch anything!

Thanks for the race report! I think we were all on forced blogger hiatus last week, so I know your pain :) Nice way to try out new things, making sure it was not your A race. I think we hear professionals tell us so often not to try things out in a race that we have it hardwired, even when we are doing a B, C, or just get the heck out there race (don't know what letter you want to use for that). Glad you enjoyed it and finished strong! Great to see your aunt out there as well. Kudos to the both of you.

Great race for you all around!

Congrats on a great race.

Killer race report Molly! I plan on doing this race in May so this helps in knowing what to expect. I can sympathize with the PreRace experience. I've had that unfortunate experience with other brands. Nothing like a nasty supplement to ruin your day. I use AdvoCare exclusively now and LOVE IT. Shoot me an email (triadvo@gmail.com) if you have questions about it! I can send you some samples to try :)