Oops, I Did It Again

A couple of weeks ago, my friend Meredith started asking me questions about a little local race that was put on this past weekend.  I've been quasi-"coaching" Meredith as she has dipped her toes into the running and then multisport worlds.  Anyway, one thing led to another, we both said said do the race if the other one did and that's how I ended up signed up.  For Meredith, it would be her first triathlon (skip to her race report if you want to see how it went).  For me, it would be a chance to have a little fun with no pressure on the dregs of Ironman fitness.

There's only so much I can say about a sprint tri, so I'll do it quickly.  And with pictures.  Everybody likes pictures.

It's always better to race with friends!  With Mary Sue and Meredith. 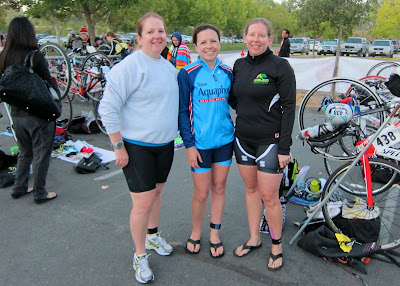 I've been using this giant tub of Aquaphor for training and racing for like 2 years now.  It's awesome. 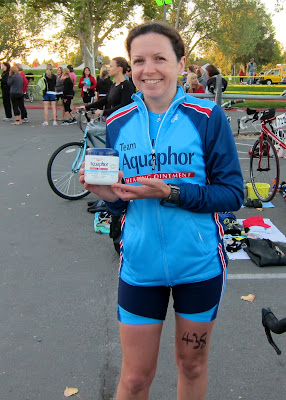 Eventually we put our wetsuits on and headed down to the lake.  Right after this photo, the first wave jumped in the water so we got in to warm up. 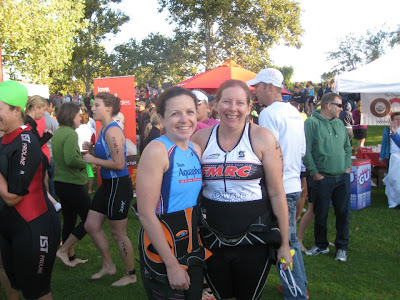 After about 5 minutes in the water, we realized they hadn't started the first wave yet.  30 minutes later, they announced there was a delay due to bike course issues.  45 minutes after that (over an hour after our original wave start time), we finally started the race.  A bit of the excitement - and all of the warmup - was gone at that point.

Bike - either 9 miles (officially) or 8.5 (my Garmin).  In either case, a big victory for me as for the first time ever in a race, I averaged over 20 mph for the entire ride. And also higher than my threshold power by several watts, so maybe someone has improved since the last bike test!  25:29.

T2 - 35 seconds, 2nd fastest in AG (only because the girl who was faster set up her transition against a tree, after they told us we HAD to be on a rack and couldn't set up there.  I guess showing up late pays off).

Run - 3 miles, and this is the part where I D-I-E-D.  My legs made sure to point out that I had just run an Ironman marathon 4 weeks ago and they had zero speed training on them.  So I ambled up and down the hills as best I could and made it to the finish.  24:18.


In the end, this race served as a nice baseline for all the improvements I plan to make next year racing sprints with some actual speedwork under my belt!  It was also good enough for 7th/90 in my age group and 24th/438 overall (apparently my AG was stocked with a lot of the fast women!).  So guess who's qualified for USAT age group nationals for next year?!* 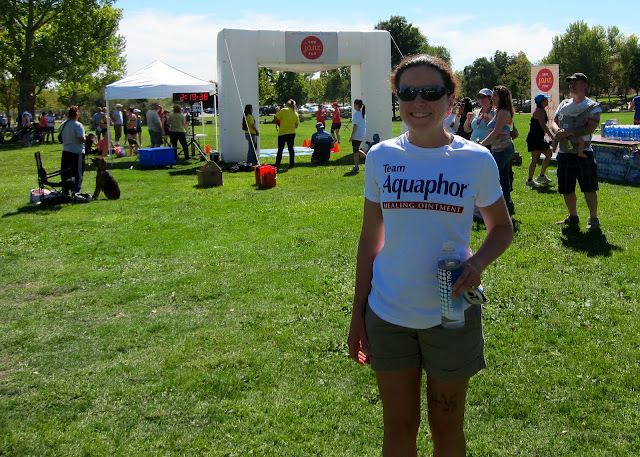 *yes, it was a USAT sanctioned race, I've checked like a dozen times to be sure!
Posted by Molly at 2:40 PM

Awesome LMM! Congrats on qualifying for NATS & having some fun!!

Congrats to your friend too!

Thank you so much for inspiring and coaching me through all of this! And a huge congrats for qualifying for Nationals! So cool!

It was great to see you on Saturday. Congratulations on qualifying for nationals!

I am so far behind I never congratulated you on your IM! Awesome job! But great job on this as well--qualifying for nationals AND not losing focus after that delay.