Wow, I really delayed on writing this.  Maybe because there isn't that much to say?  I wasn't exactly tapered for this race and coming off a couple weeks of BIG training, my legs weren't really having any of it.  It felt like "racing" instead of *racing.*

I got down to Uvas by 5am and walked down the road to transition in the dark.  Set up my spot with only the light of my cellphone - there are NO street lights out there and it was REALLY dark.  Went back to my car and took a nap.  Came back to the frenzy of transition and was pretty relaxed, ran into my friend Heather who was doing the long course, and just hung out.

Just before 8:00 it was time to hop in the water.  62 degrees in the lake and my first OW swim of the year, so I just tried to have a nice smooth swim.  There were a lot of newbies in the sprint so I passed people from 2 of the previous waves, breast stroking or stopping to rest on shore of the island we swam around.  Eventually, never as fast as it seems it should, the end came and I got out.

My wetsuit came off reasonable fast and I had the fastest T1 of all women in the race, 2nd fastest in the entire race.

I biked.  It was hilly.  This was where I started to see that my legs just weren't going to comply on the day.  I was trying to push threshold power and it just wasn't coming along well.  But I passed people and I was strong on the hills, and eventually (but of course not soon enough) it was over.

Back into T2, where I also had one of the fastest times in the entire race.  Well at least I was fast somewhere!

And then on to the run.  Where my legs were just not with it - usually I can count on zippy feet and fast turnover to pull some speed out on the run but it was more of a slog today.

And then it was over.  Thankfully with sprints at least you don't suffer for TOO long.  I ended up ~4th in my AG (the results posted on race day include the top 3 overall pulled out of AG results) and as that's about the highest I've ever placed in a triathlon, I'll take it.  The real goal races for the year are further down the road, this was a good chance just to get my feet wet again.

Best part of the day was getting to cheer for Kristi for winning her AG! 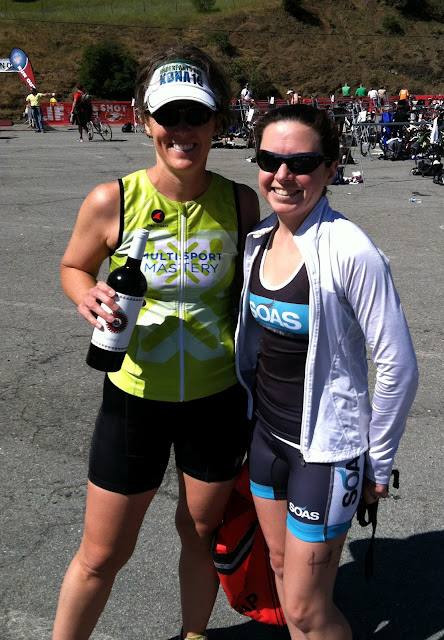 Seems so early to have a race already. We're only just through with the snow around here (hopefully). Good job finishing it and congrats on the placement.

Race season is here!! Check out your cut arms in that wetsuit pic :-)

Congrats on doing well in your age group and on your super speedy transitions!

Forget the transition class, I need one how to look good for the camera even when you don't feel good!

Nice work, even if it wasn't the wanted.

Good job Molly! We have ice on our lakes too, i wonder how cold the first race will be:)!