Forgive me, internet, for I have been a lazy blogger.  I raced on Saturday and have sat around all week (actually it's been totally nuts but anyway) without bothering to write a report.

Last Friday I did my pre-race workouts and then headed out on my 5 hour drive to June Lake, located in the Eastern Sierras on the backside of Yosemite.  On the way out, I chose to drive right through Yosemite on Tioga Pass. 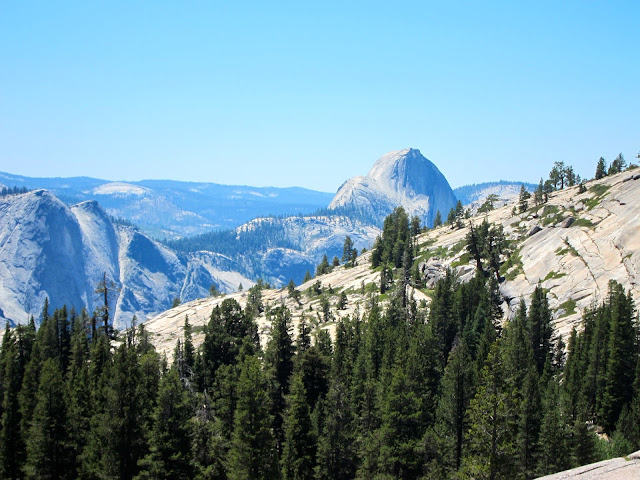 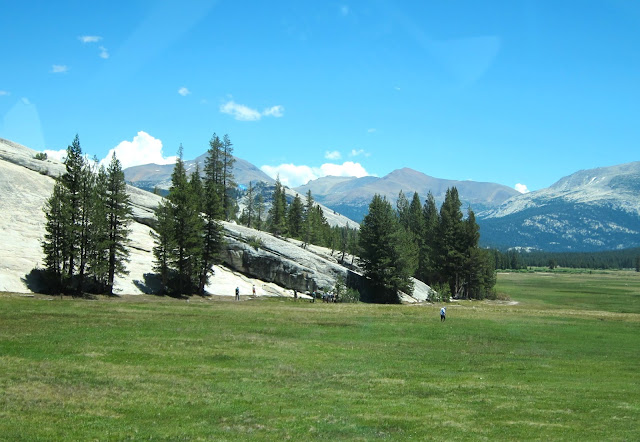 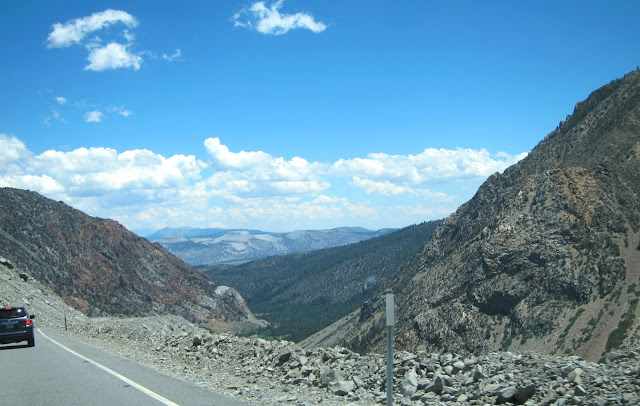 Eventually, I rolled into June Lake, a small town on the shores of the lake by the same name, at an elevation of about 7600 feet.  This is pretty typical Sierra scenery - cool clear lakes, big mountains and forests. 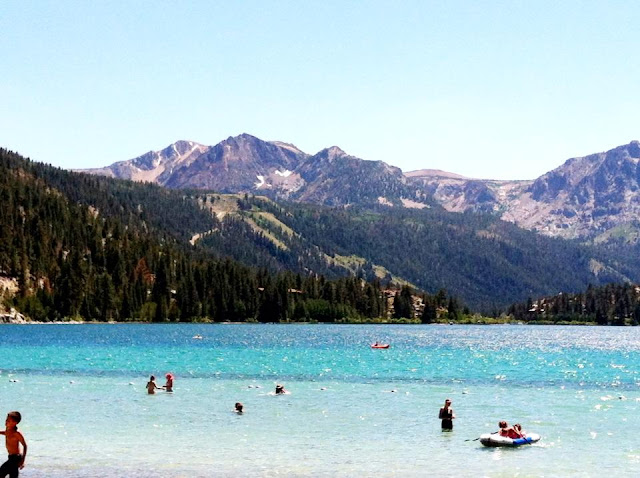 I chose to camp at the Oh Ridge campground just above transition - it made for an easy race morning roll down the hill.  Rather than deal with taking down a tent before or after the race, I just took all the seats out of my car and slept in the back with my bike.  I slept surprisingly well and could have stayed in bed longer when my alarm went off.  I had some cereal, a banana and beet apple juice, pumped my tires, and headed down to transition. 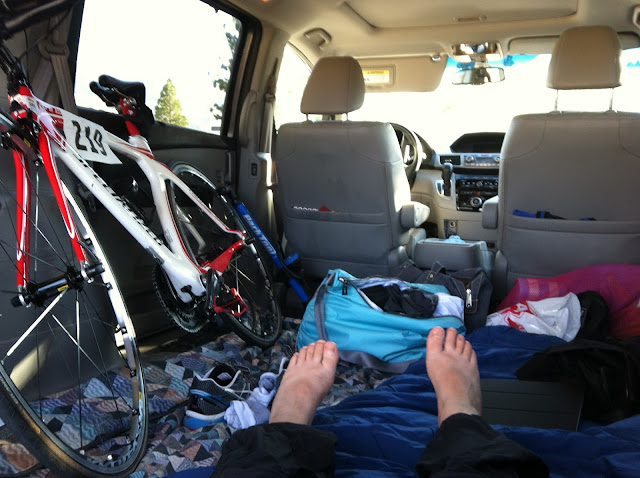 View from transition on race morning 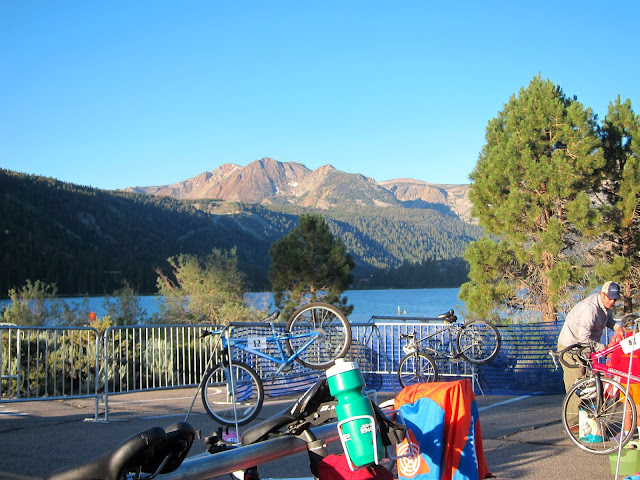 The 1/2IM was scheduled to start at 7am, the Olympic at 8 and the sprint at 9, so I had a long time to hang out and wait. 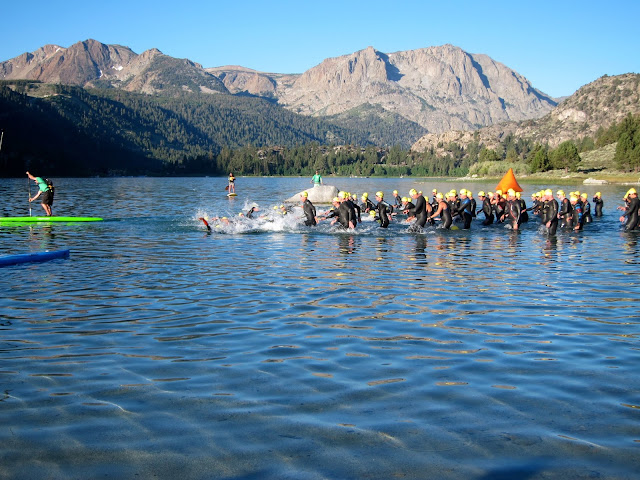 Last time I swam at altitude was backpacking with Shannon last summer and I had real trouble.  So I was a little concerned but at least it would be a short swim.  I really had no idea how my body would respond to an entire sprint at altitude but just had to hope for the best.

I got in the water about 20 minutes before the sprint start to take my time warming up and immediately felt…totally OK!  I built my effort a bit, then did some short sprints and I had NO problem breathing at all.  Phew, OK, this day might turn out alright after all.

Eventually they kicked us all back out of the water to walk across the timing mat and then I lined up in front.  The sprint started off with a bang as I went hard and tried to just maintain a strong effort.  I could *feel* I was at altitude, just by the way I was breathing really hard, and I tried to stay right on that edge of effort that kept me panting hard but not blacking out.  Our course had really easy sighting and totally clear water and I wish it'd gone longer!!!  I had to swim wide around breaststrokers and walkers in a few spots but it was all good.  Before long, I was headed out the finish arch and running up a hill in deep sand to transition.

Transition was set up as one looooooong row so I had to run past all the 1/2IM and Oly racks, to the far end where I was racked.  Pre-race, I had marveled at the crazy number of people in the sprint racks setting up water basins to wash their feet off…that plus the amount of rack space these people took up had me a bit worried that transition would be a complete clusterfuck and I'd show up with my entire rack collapsed.  Thankfully my bike was still there OK!  After the long run to my spot, I think I'd lost most of the water in my wetsuit which made it stick on one leg and took forever (!) to get off.

The bike course was a challenge and a delight.  It felt like I was either on the verge of geared out going downhill or in my smallest gear going uphill the entire time.  If I felt the altitude at all, it was just that I panted hard going uphill but it's a sprint so I was going to be doing that anyway.  As Coach had predicted, my average power was lower but I still maintained a decent speed given all the climbing.

Back through transition, again running all the way from one end to the other, hurry hurry hurry.

And then it was time for the leg this race is most known for…one serious trail run.  As I saw the athletes wind their way straight up mountainsides on trails, I was quite happy to only be doing the sprint.  Still, we had plenty of steep segments and all on trail made entirely of slippery sand.  I think I was sliding backwards at some point while trying to go uphill.  Once I hit the turnaround on the 2nd out and back, I kicked my effort up knowing I just had to get back downhill to the finish…great fun then leaping downhill in the sand (less so running down the beach in the deep sand to the actual finish line). At least, it would have been fun if I hadn't been pushing all out trying to wreck myself.

I kicked off my racing flats and went to sit in the cold lake for a while and cool down - now the temperature felt perfect!  Then I went to check out the post-race food Triathlete magazine rated as "one of the best finish-line spreads you’ll ever enjoy."  I wasn't really hungry but with a long drive home ahead I ate a little of everything and YES it was not your typical post-race fare…it was really good, really healthy food.  I checked the results multiple times before I left, because I was fairly sure there hadn't been that many women ahead of me, but the posted results said I was 4th/28 in AG.  Given how hard I worked myself out there, I could not possibly complain.  I took my bike back up to the campsite and loaded my car, changed into dry clothes while listening to the awards ceremony - nope, definitely didn't call me up there for the 35-39 podium.

Well…as it turned out…*someone* spilled one of those basins full of foot wash water over the timing mat during the race and there was a snafu with the race results.  When the official results were posted on Sunday night…guess who was in 3rd in AG???* 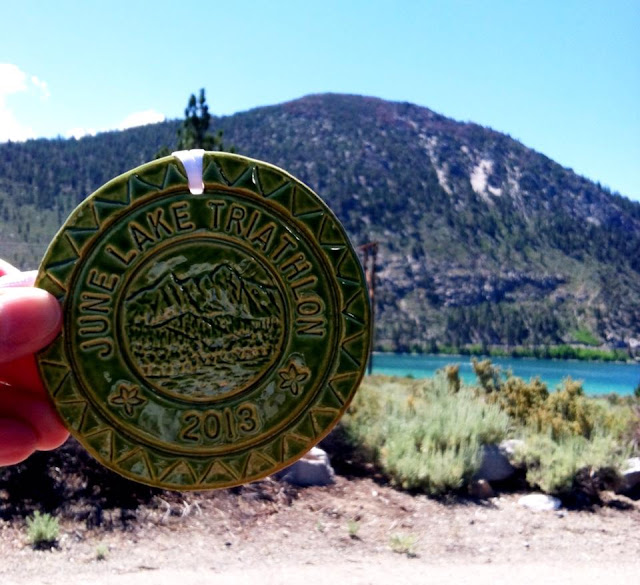 *Given that the race prizes looked AWESOME (beautiful artwork of the lake), I have a message in to the RD about getting my award.

And then it was time for the 5 hour drive home again…this time I took the Sonora Pass, which is by far my favorite route through the Sierra Nevada.  The scenery is unparalleled!!! 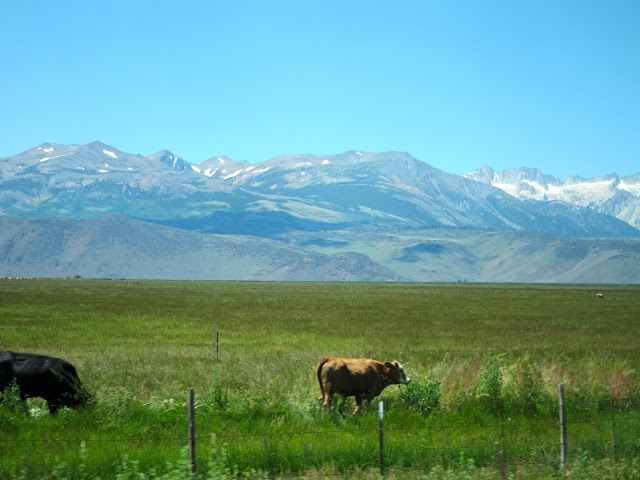 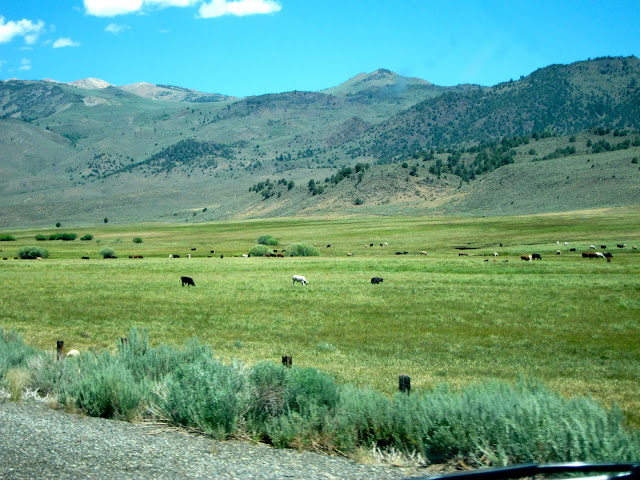 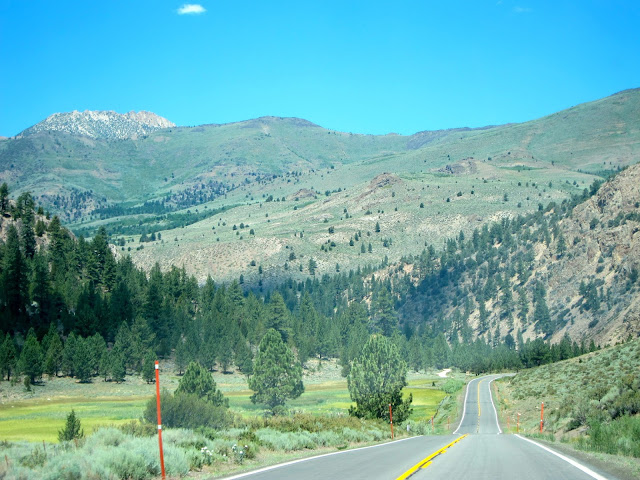 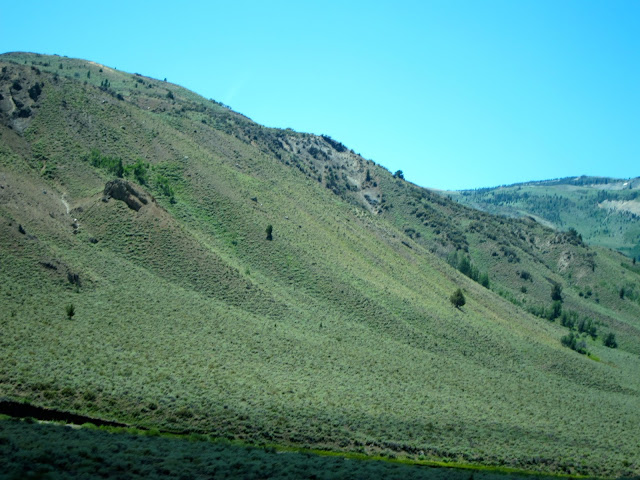 Bonus Report:
On Sunday Jeff and I knocked another item off my CA bucket list with a river rafting trip back up in the mountains.  We chose to do a full South Fork/American River trip with American Whitewater and I can't say enough good things about how great it was!  Even as I had the distinct "privilege" of being the person who got dumped out of the boat in a rapid only 2 minutes into our journey and then pushed UNDER the raft by the current.  It's a good thing I am comfortable in water these days…  But really it was a super trip and a great way to say goodbye one more time to one of my favorite areas! 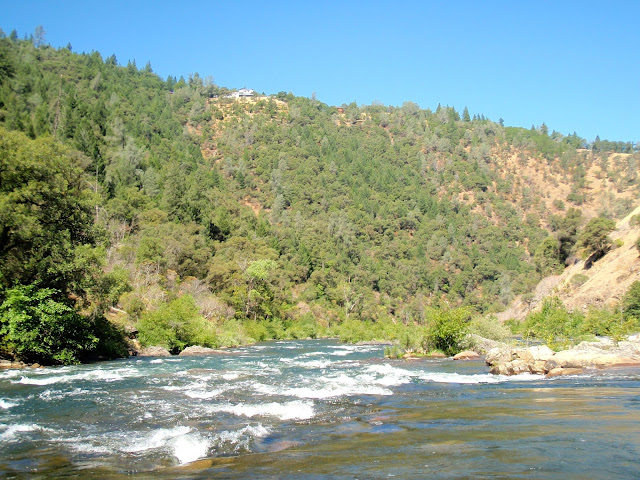 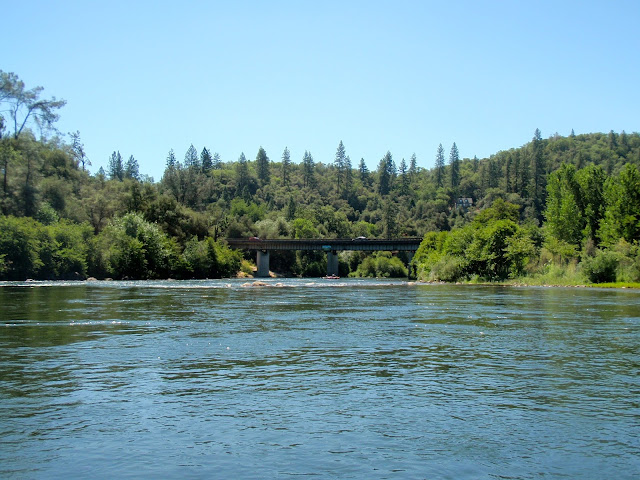 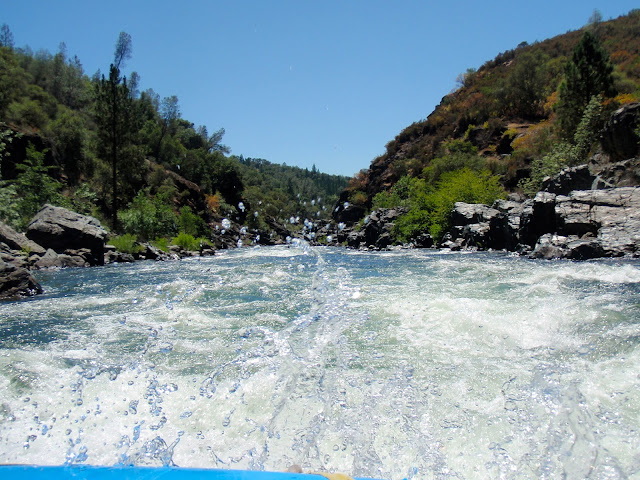 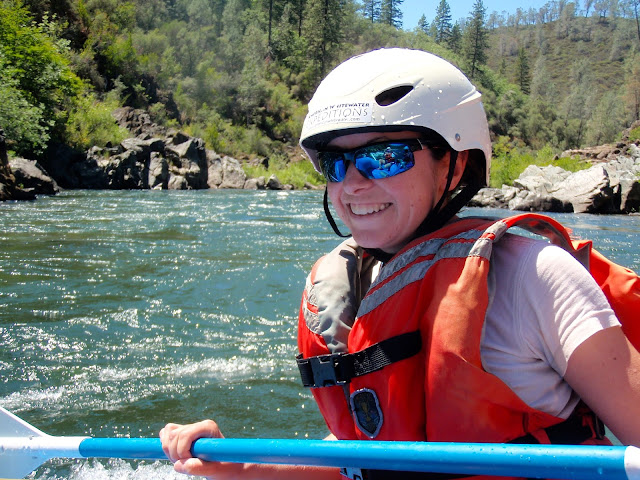 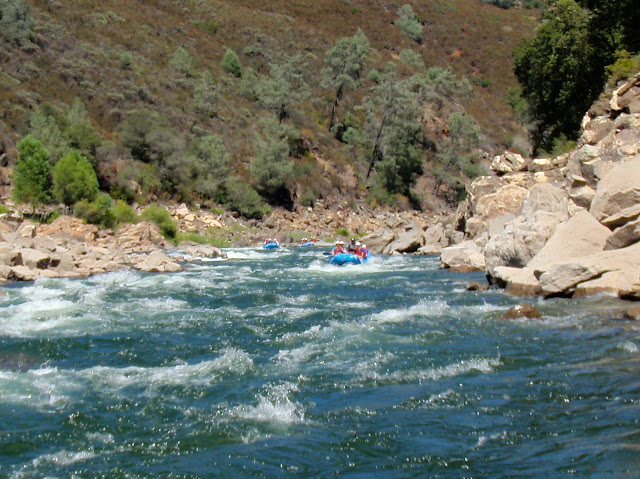 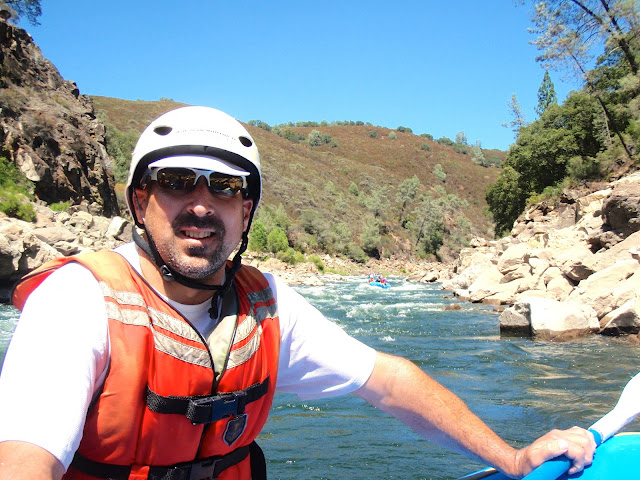 Wow! What breathtaking views. Just, wow! Congrats on your race, though sorry to hear about the timing chip fiasco.

Your pics are fabulous. Congrats on your 3rd place finish. I hope they get you your award.

congrats on the race. You're becoming quite speedy! I love rafting!

A friend talked about how great the June Lake tri is, and your photos certainly showcase that! Congrats on your race!