So I rolled out last Saturday morning feeling like this was my first "real" triathlon of the year.  I raced once back in April but it was so early in the season, I was in the middle of a big training block, and I was still recovering from being sick in March, it just felt like practice more than anything else.  Now I've been working pretty consistently for a couple months and seeing some good things in training; I was ready to go balls to the wall and sprint.

My race plan had a lot of phrases like…"no regrets," "violent," "all out," and "hurt."  It also had "eyeballs bleeding" and "puke."  So clearly this was going to be a fun time.

The Cali Sprint Tri is held at Shadow Cliffs in Pleasanton, a spot I'm very familiar with from training and racing.  The swim is held in a warm lake that used to be a rock quarry (there are other quarries right nearby still in operation), the bike routes for various races from there are generally quite flat, and the run is always on the trails in the park, in gravel and dirt, with a lot of hills.  I was especially excited to race this one because my good agility friends Tania, Barbara and Tricia were racing the relay together and we could hang out before/after the race.

I arrived well before transition opened, did my packet pickup, dropped my stuff in transition and went back to my car to read and relax.  Once my friends had gotten there, I sat in transition and hung out with them until it was time to get in the water and warm up.  The day was forecasted to be 103 degrees and I wasn't in a rush to get my wetsuit on.

As it was already nearing 80 when the race started, the 72.5 degree water felt lovely!  I took a long time to warm up and then worked my way up to the line with the rest of my wave.  The course was a simple square with 2 turn buoys and then a return to the beach, so I knew sighting ought to be quite easy.  I went out hard and managed to hold a hard pace throughout…I think I'm finally getting better at putting my pool technique into action in open water and I felt the difference in this swim. 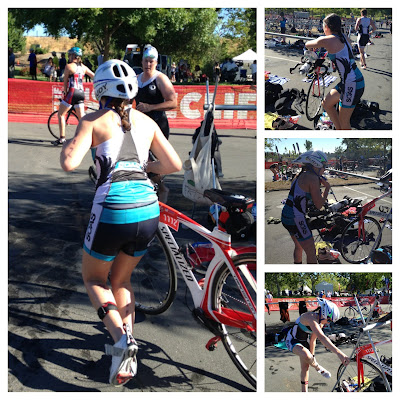 The bike course for this race had a few spots that were new to me and a number of out and backs with u-turns at the end of the road to slow you down.  My goal was just to take it out hard and stay that way.  And that's more or less what I did.  I spent a lot of time passing people and I averaged around my last bike test FTP in the end.  All the hard work I've been doing on the bike does indeed pay off!

Returned to the park, where I had to run across transition to my rack spot, then back across to exit onto the run course.

By the time I started the run, the temperatures were getting into the 90s.  There is very little shade on this course and it's mostly a slippery gravel surface where you don't get nearly the distance you ought to out of each step.  At this point it merely became about outlasting everyone else in the heat…I still passed people but I was just hanging on and trying to get through the distance!  I kept telling myself I have done lots of heat training and I have suffered a lot on the track this year and I can just keep moving forward and pushing.  And other than when I had to stop to barf, that's just what I did :) 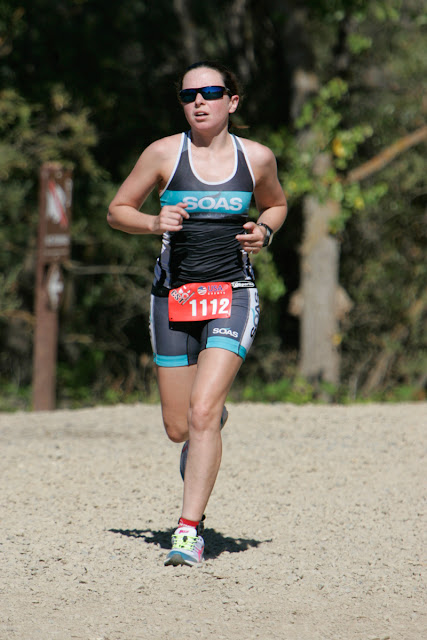 No, really, it really hurts. 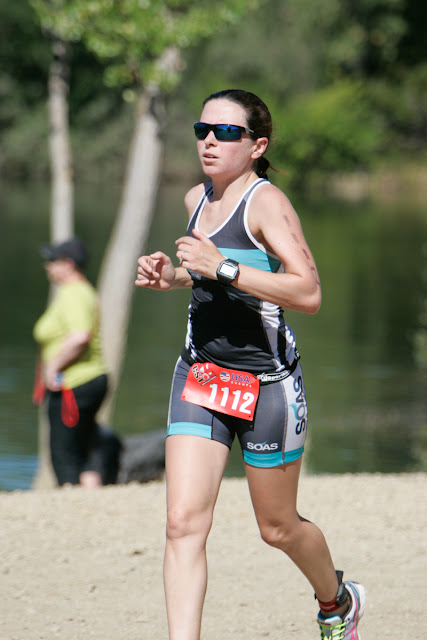 Finally, it was done! 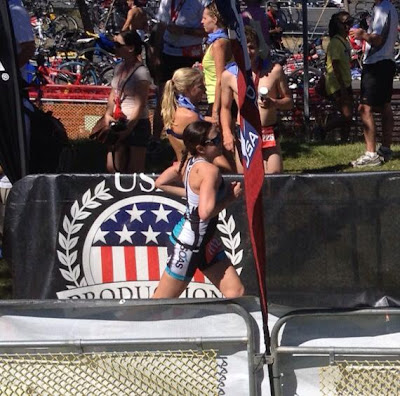 
After about 15 minutes spent bending over trying not to vomit and after I shoved about a cup size's worth of ice down my top, I was able to take a finish photo with Tania, my friend and agility teacher. 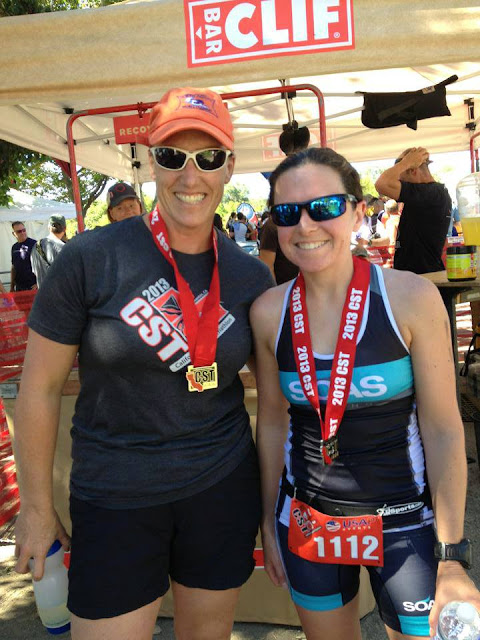 In the end, my race was good enough for 3rd/23 in AG!  My first triathlon podium in recent memory (there may have been one a long time ago but that was only due to lack of participants).  I won another bottle of wine (I won one earlier this year at the South Bay Duathlon) that I'll have to convince friends to drink for me :) 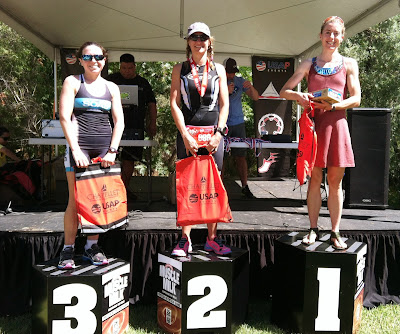 And with that, I feel quite energized about tri season and the (two) races I have left.  I've always counted on my run to pull me higher in the standings and this was the first time it was my swim and bike that got me there.  This was a nice validation that my training is coming along perfectly and is well timed for my biggest races of the year.  As always, thanks to my coach for kicking my butt into shape and giving me all sorts of challenges that I fear and love - she's taught me over and over that if you just get the work done, good things will happen!

I love this race report, LMM!
You know why? Because I have read and watched you get SO much faster and smarter (you were always smart) each year - look at your bike average! 20+! Plus, you look cute in your kit.

CONGRATS to you! NICE to be on the podium, I know how hard you work!

Congratulations! 7th in your AG in the swim - I am so impressed! Fantastic job.

Congrats on your podium finish! If you have to stop to puke that probably means you've given it all you've got.

Yay MOLLY! This is so awesome! If it weren't for your race, I probably wouldn't have gone as hard as I did.

Looking forward to the rest of your season!

Great job! Your run may have been slow to you, but from that finish shot it looks like you had a strong kick.

Congrats on the podium finish! Sounds like a hard and great race for you.