But first…I spent Saturday cheering for the always-lovely Cat in the Napa Valley Vintage (Half-Iron) Triathlon (her RR in the link). Cat completely rocked the course and accomplished what she set out to do – qualify for SOS. Not only that, she overcame pouring rain, a flat tire, bike mechanicals, clueless volunteers, and poor race management. All with a smile on her face and a great attitude all day. It was helpful to me racing today to have watched her take every stumble in stride and still put a successful day together. 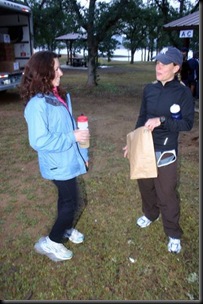 It was a long day yesterday with Cat's race but I ate ALL day taking in calories to make sure I was ready. Being cold in the rain probably helped me to sleep very deeply last night – it was excellent night of rest in the hotel (with the heat blasting all night to warm my chilled body).

Last minute thoughts from my coach: “Time for you to get out there, GET AFTER IT, and race like an ANIMAL!!!!!!!” *gulp*

Pre-race: I was up at 4:30am to eat and get ready, out the door at 5:15, and at the race site at 6:00am. In pouring sheets of rain. Oh yes, it was going to be a fun day. Once I got my transition spot I was pretty much going to be drenched anyway so stripped off the sweats (which I would want dry later) and sucked it up.

I have no idea if it was a good thing or not but I really wasn't nervous today. At the very least I usually have butterflies of panic at the swim start. But I was just ready to GET IT ON already.

Warmup: Cat and J arrived and we walked down to the swim start so I could warm up. The water was ~60 degrees - although cool, it felt better than the cold and rain on land. I swam for 5-10 minutes to get myself ready and then got back out to shiver and wait. 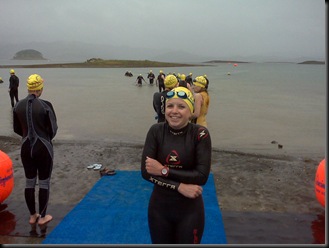 You can’t even see the other side of the lake through the fog/clouds! 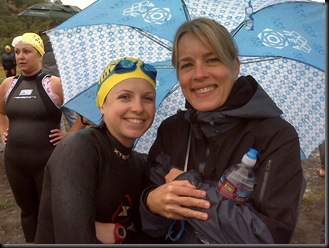 She’s standing on a rock, she’s not really that much taller than me 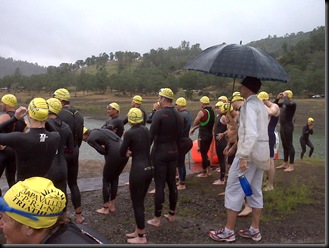 Swim: The swim looked to everyone to be longer than half a mile. Oh boy, my favorite, extra swimming! I felt so-so the first ~200 yds (had the "I'm supposed to do over twice this in 6 weeks?!!" thought), and then I realized I was still with people from my wave and settled into a rhythm. The first buoy was too far out to sight easily so I followed an orange-capped guy (we were all given yellow caps) who was breaststroking with his head out of the water. I realized about halfway to the 2nd buoy that I was in a nice rhythm and this was going well even if it felt slow. I turned around the 2nd buoy and found the water was now very choppy and tossing me around. I got kicked in the head and got a couple mouthfuls of water that I had to stop and cough out and catch my breath to be able to continue. I wasn't really happy with that but there was nothing to do but get on with it and keep moving forward. Cat told me later that the last 2 buoys were moving around a lot in the water so the swimmers were all over. 0.5 mi (supposedly) swim, 0:24:54. Not pretty, not fast, but done.

T1: Long run from the water to the far end of transition. I got my wetsuit off much faster than my last race and then took one moment after I was ready to take a deep breath and not be dizzy at the mount line. No falling over! 3:38 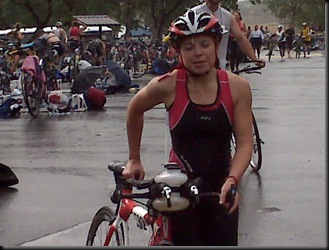 Bike: It was still raining as I headed out on the bike. The course was - as you've learned from Cat - HILLY. It was all uphill or downhill. I got myself settled and comfortable on the wet bike to start and then picked it up. When I hit 8 miles and knew I only had 3 left, I put everything I had into going hard ("you can do ANYTHING for 3 miles"). I felt a little frustrated on the hills sometimes and how slow I felt, but I was still passing people up and down. Got back to where the bike-in was supposed to be knowing I'd make a 17mph average and...they'd moved it! We had to go further down the road and then on a narrow trail in the park, meaning everyone bunched up and went slow. This added more than a mile to the bike course AND meant no pushing on the last mile - I wasn't thrilled but figured there was nothing I could do about it. 0:43:44, about 16.6 mph average over 12+ mi course.

T2: I ran from one end of transition to the other, ditched my bike and helmet, switched shoes, and ran back across transition. If only I'd known they set this up to favor one side of transition! 1:54 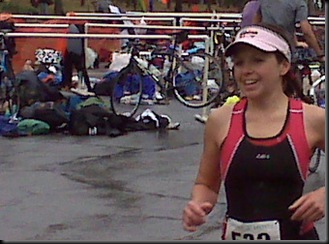 Run: Finally my happy place! I went sprinting out of transition passing people. The "fast flat" run course was actually hilly trails and then hilly road - oh boy! At least the sun finally began to peep out! Every uphill FELT slow but it’s all relative after the bike. On the downhills I tried to remember what Cat said yesterday on her course - that downhills are free speed. I passed 11 women and countless men over the run. After the turnaround I picked up the pace even more and was all-out sprinting by the time I made it back into the park – all I could think was, tune out the pain and GO. As such, I'm THRILLED with my run time - definitely the best pace I have ever done in a tri. This is the run I should have had in that race 3 weeks ago on a flatter run course but I had it today on a hilly one! 3 miles, 22:13, 7:24/mi pace. 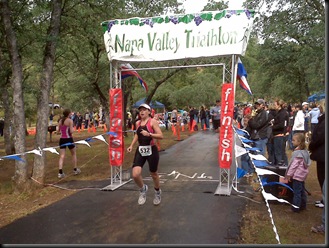 Post-race: After I stopped feeling like puking, I felt really good! My legs are beginning to HURT but it's at least the good hurt of knowing I worked as hard as I could.

There are still some things to work through mentally and logistically before Boise. More OW swims will get me over some of that panic I had halfway through. But overall a very good race day and easily my best sprint performance ever!

HUGE GINORMOUS thanks go out to Cat and J for staying an extra night in Northern CA and suffering another rainy cold day to cheer for me and update the rest of my virtual world.

And what was up with this guy? He did the entire bike leg with his wetsuit on. I know it was raining but…HOLY CHAFING BATMAN! 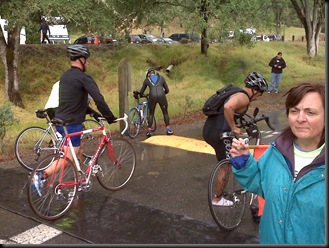 Great job, Molly!! So happy you had a mechanical issue/spill free day! Tough girl out there in the elements. Pretty cool. You now deserve a beer, or a margarita...or similar!

22 min run?! You are an animal! Great job in less than ideal weather--both you and Cat. Hope you've found food food and more food. That is why we tri afterall...

That's a perfect way to wrap up a bday week. Happy happy!

Way to go, Molly! Rainy tris are such a challenge (3 out of 4 that I did last year rained) and you nailed it! What a SUPER SPEEDY run you had! Wow! I am impressed! Can I borrow those legs for this weekend... pretty please?? Big congrats to you! Rest up well this evening...

PS- This FL girl is shivering thinking about those COLD rain drops! Brrrr....

Great job! That is a SMOKIN' FAST run split...Awesome!

Seriously... the guy in the wetsuit? Wow. Just wow. How bout the guy with the camel pack too? It was a sprint, right?
I KNOW I shouldn't be surprised, but I always am lol.

FANTASTIC JOB MOLLY! Congratulations on a great race... You did BEAUTIFULLY! I wish I could give you a hug - excellent! Now - enjoy the rest!!! :) CELEBRATE!

Congrats Molly! You really nailed it! So happy for you, enjoy your recovery!

I'm going to have to try that riding the bike in a wet suit trick! Has to be more aerodynamic ;-)

Well done, Molly!! I'm right there with you on the OWS stuff. I'm hoping to get a few more in before my first race June 6. You nailed that run, too! I would love that pace on a stand alone 5K. Stella!!

I was talking about you with someone the other day and told them "Molly has balls". That is a compliment and I don't think I need to explain myself. :)

Great job, Molly!! Looks like those bike rides in the rain really paid off. What a great run you had too. CONGRATS on your race. I've heard that some guys do sprints with the wetsuit on to save on transition time but thought it was a joke!

way to go, girl!! i think you know how happy i am for you and how much fun it was to be out there cheering you on.

YEAH for strong body and mind!!!

Wow, you are a fast runner! & that was a solid hilly/wet bike split too, nice job, your report was fun to read. & those dogs are the cutest!

Woo hoo Molly!!!! Congratulations on an awesome race. You were just flying! 14th in your AG is fantastic.

Wowsers, I cannot believe that guy raced in a wetsuit. Maybe he was just really nervous and forgot to take it off? Crazy!

Congrats on a great race and a fantastic run!

I can't believe that guy did the whole bike in a wetsuit-crazy man, I've never seen that before.