Hey, did you notice it’s staying darker longer in the mornings? Um, apparently I have not been keeping track of this, as I arrived at Shadow Cliffs with my swim buddies in tow today and it was still quite dark out. Sorry, guys, at least it gave you more time to get ready, right? 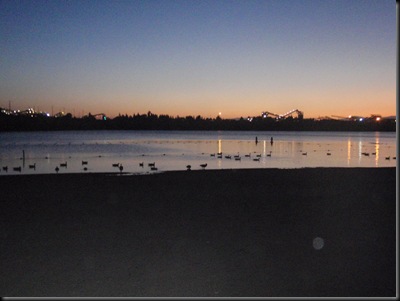 Actually it was pretty cool – as Steve and I meandered up to the lake, we saw a fox stalking the geese! He bolted as soon as he noticed us. In other nature sightings, Steve and Nigel told me they spotted a vulture chowing down on a fish on the far side of the lake while they were waiting for me.

Despite a chilly morning (temps hovering around high 40s), the water was a lovely 70-something and felt WONDERFUL. The first 20 minutes of swimming went as usual (what am I doing? this sucks. I can’t do this. How am I going to do 2.4 miles of this next month?), I couldn’t seem to see where I was going (no buoys to sight off in this lake, just the far shore), I couldn’t see the guys at all, and it felt like a really long way to get anywhere. Eventually I settled into a rhythm, made the turns and finished the first (full) lap. Knowing I only had about a mile left to swim, I set off for the out-and-back and the water felt choppier. When I stopped to turn around, I realized I was going to be swimming back with the chop right in my face – fun! With the final buzz of my Garmin to indicate I’d completed the required distance for the day (2.25 mi), I still had a small ways to go to the swim beach. I hit the sand and stopped the watch crammed in my swim cap, and then I pulled it out to see I’d done 2.32 miles. Only 0.08 short of IM swim distance! And in a better time than I would have expected as well – a good sign for coming in well under the cutoff on race day.

My sighting wasn’t too bad, considering there was little to work off but very distant walls and trees. You can see more weaving on my final approach to the beach, as I swam across the chop to allow for better breathing/sighting. 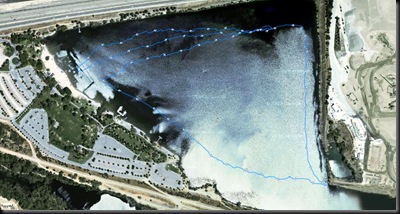 A quick ride on my bike and I was done for the day! The nice part about starting early is being finished early and having the freedom to eat and relax until bedtime. Tomorrow’s long bike/run brick will start early enough…

I hope to get to OW one more time but with our night temps i think it may be a token scream fest if i make it!

You are going to be just fine for that IMAZ swim... I just know that you are. :o)

Great swim. You will be perfectly fine for IMAZ. Youll be done way before the cutoff.

Good job on the swim! I noticed how much easier it was to sight during my half iron because of all the buoys along the way and other swimmers around.