I’ve been somewhat MIA online this weekend.  Dave and Meredith came to town so that Meredith could race the Nike Women’s Marathon.  Hence I have been busy hosting them and having a darn good time hanging out.

On Friday I had a nice easy swim on tap, which I completed using an excessive amount of pool toys.  Fun!  Then I picked Dave and Meredith up at SFO and we headed to the City for the expo/packet pickup.  The race expo was…interesting.  It was a long slog through city traffic with crazy drivers and parking situations to get there.  I had been hoping to buy some sports drink and a few other items, but there wasn’t the usual shopping you would expect at a race expo (I hear this was located somewhere else but then not very convenient).  As a (mostly) women’s race, the unusual features were things like manicure stations at the expo, chocolate stations on course, firefighters in tuxedos at the finish line to hand out Tiffany jewelry.  I am sure that appeals to some people (and gawd I hope this isn’t controversial to say) but for me…who needs all those excuses to run when the joy is in just doing it?!

Anyway, the Niketown store had all the racer names up on a wall outside their store.  Yay Meredith! 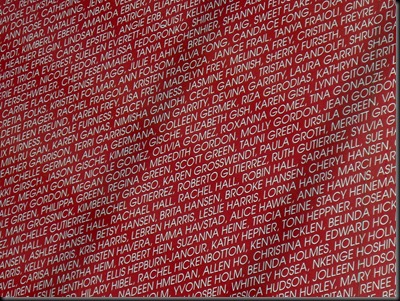 Saturday was my longest pool swim ever (4200 yards = roughly IM race distance) and Dave joined me at crackass-of-dawn masters for his first long swim since his Ironman in June.  It was good to have the company as I ticked off the yards.  We came home and I hopped on the bike while Dave and Meredith watched college football. 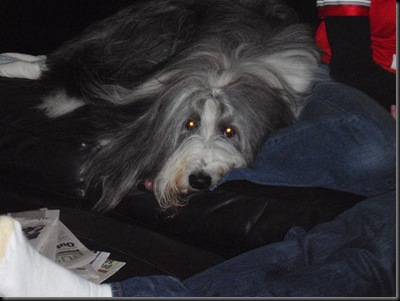 The rest of the day was spent eating, napping, and eating some more while gearing up for Sunday.

Sunday dawned dark and early at 4:15am when I got up, walked the dogs, and ate breakfast in the half-dark kitchen with Dave and Meredith.  We were on the road to San Francisco by 5am!  Dave and I dropped Meredith a block from the start and headed across town to Ocean Beach, where he could spot her around the 9, 11, and 13 mile markers.  I headed off on my longest pre-IM long run and took advantage of the cold foggy weather and race-closed roads to cruise around Lake Merced for 2 laps of the late miles in the marathon before the racers got there.  18.5 miles later, I was done and back at the race craziness. 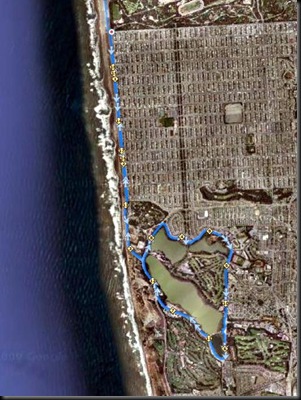 Before too long, there was Meredith finishing one seriously hilly marathon and quite early in the field compared to most of the marathoners (those are all 1/2 marathon folks finishing on her right). 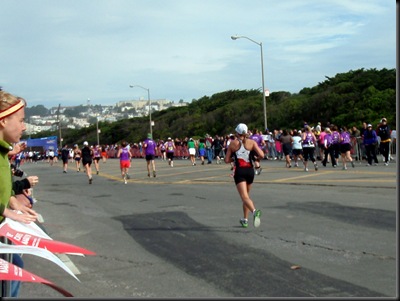 She is one tough woman and gutted out a hard day out there to finish.  I know this will just make her stronger for her first Ironman in Kentucky next year! I have to thank Dave and Meredith for being so patient with all of my training while they were visiting.  Dave certainly didn’t have to come swim for what felt like forever with me, and he was very gracious about spectating the marathon alone while I ran for hours.  I will miss them when they head home tomorrow – it’s been fun to hang out and compare notes on races, nutrition, etc.

Post-race, it was time to get down to the most important business of all.  MARGARITA TIME! 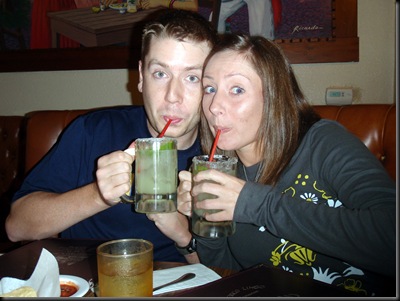 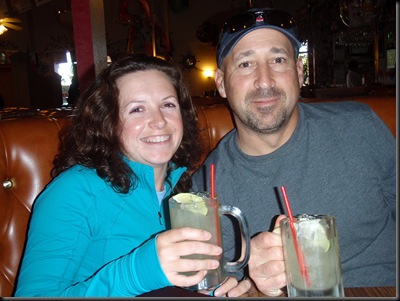 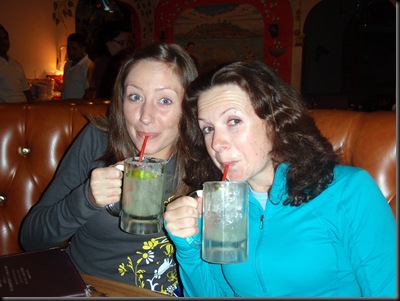 With that, my biggest volume week of my Ironman training is done.  WOOHOO!!!!  I have a rest week up next and then one more solid week of training before my taper begins.

So much fun to see different bloggers getting together to support each other and have FUN!

All that goofiness (nail polish, chocolate stations...) are exactly why I stick to the small races - $10, day of race entry and 100 people for my half. Love it.

hope you enjoyed the margaritas!

Yay for 5 weeks to go! We have to drink post race. I'll bring the fixins for bloody mary's to the awards ceremony.

That sounds like one fun weekend. I am glad your big training week is done. Now it's a proper countdown. Yay!!

I can't believe you're ALMOST there! Great job this week and cheers to the margaritas. Well earned!

Awesome mileage Molly. It is all downhill from here (in the good sense of the word). IMAZ-bring it on! You are ready.

Nice job on the big volume week! Wow, hard to believe that IMAZ is getting so close!!

I agree that the manicure business is goofy, and the expo is near pointless, but I did race the Nike half a few years ago and I had a good time. The course is pretty, and if you can get past the fact that the TNTers will not chear for you then it is a good race. And I do like my Tiffany's necklace... But the race is a total gong show now with having to enter via lottery that even though I wouldn't mind racing it again, I doubt it will happen...

congrats on being a multi-tasker: host, ironman in training, marathon cheerer, and of course margarita consumer!
5 weeks baby!!

Yum! Margaritas! You know how to celebrate post training/racing. Great job on keeping up the training volume. It has to be so tough in the home stretch but you are almost there!!

Cool pics, especially the names one.

And very impresive week of training numbers - you must be peaking now, as those are some pretty solid numbers.

I don't know how you had time to go see a race and have margaritas too. You are a true multisport athlete :-)

I had this big list in my head but I finally had to write it down.. I keep forgetting little stuff (like make photocopy of passports)...