I know, it’s late in coming.  Even the people who know all the details don’t quite believe the week I’ve had.  IN-SANE.  So perhaps this race report won’t have all my usual long rambling details (because I can barely remember my own name at this point) but it’s getting done so Meredith gets her report!

On Sunday I headed down to Santa Cruz for this Olympic-distance race!  My aunt and uncle and of course training buddy Nigel were all racing it.  Last year we all did the sprint together.

After waiting through the pro/elite wave and the mens wave start (each wave 15 minutes apart), the women were finally ready to go.  We took off from the beach and dove into the chilly ocean water.  Swim swim swim for one loop, run across the beach, and dive back in for a second loop.  That one seemed to go quicker and I was out of the water in my fastest Oly swim ever.  32:27.  5th in AG. 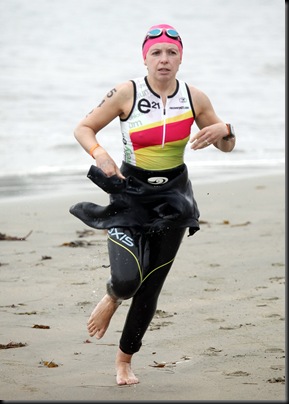 From there it was a long run up the beach and down several city blocks to transition.  The sidewalk was under construction so they made us run on the road.  My feet are STILL bruised from this.  In n out of transition quickly and onto the bike.  T1: 0:54.  1st in AG.

The bike was 4 loops around Santa Cruz.  Many of the women I’d started with were doing the aquarun so it felt a little quiet out there but I just kept plugging along.  I sent my race wheel with my Powertap back to Saris last week for repairs so I was racing without data and just trying to go off of feel.  I learned on the first loop where the “fast” segments were and pushed those harder on the subsequent loops.  Before too long the bike was ov-ah!  1:17:05.  6th in AG.

One loop after another… 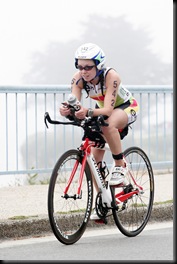 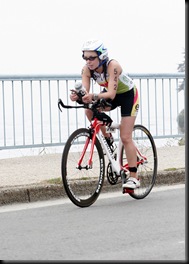 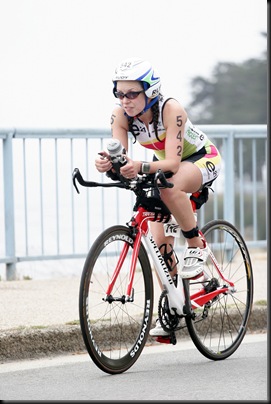 As I rolled into T2, I had seen a friend headed out on the run who said “Well there you are, what are you still doing out there???”  OK then, my mission was to run her down!  Heading out on the run the sun finally came out and things warmed up – I tried to hold a steady-hard pace and see how much I could get out of it.  I messed up my Garmin somewhere along the way in the race so I was flying somewhat blind on pace in the run too.  I hoped to run down as many women as I could but I only passed a handful, including tearing right past my friend 1/4 mile from the finish line.  50:21 (8:07 pace).  1st in AG.  And a new 10k PR by 1 second :)

Look, Ma, no touching the ground! 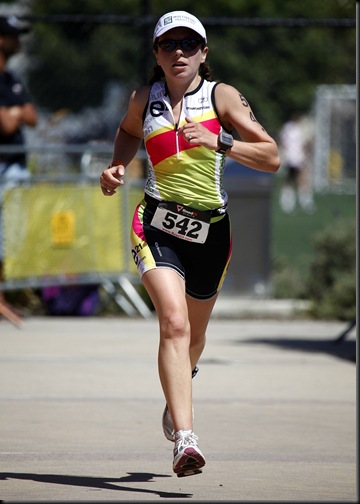 Nigel was waiting for me at the finish as he’d started 15 minutes ahead of me.  We knew with his swim skills I’d be unlikely to catch him but I did beat his race time by 20 seconds – something for him to think about next time :) 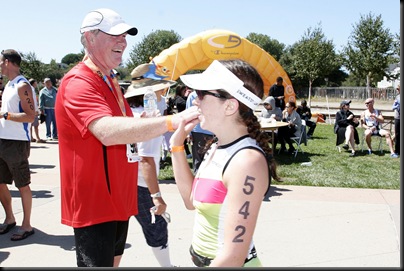 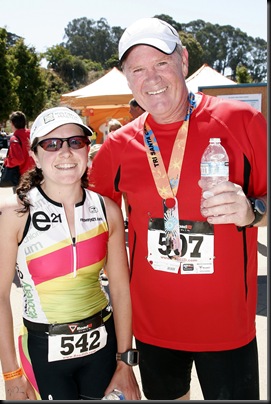 With Nigel and my uncle – I’m not sure what happened to the photographer when my aunt joined us after the finish. 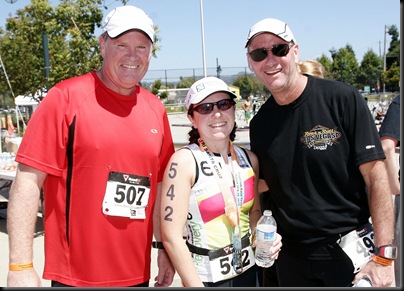 In all it was a 13 minute PR for me at this distance and I ran myself into 2nd place in my AG! 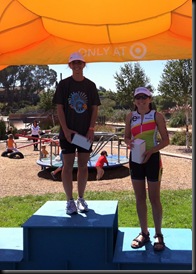 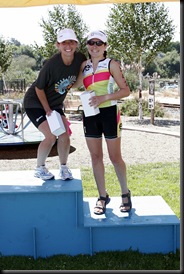 Even better was that my friends/family podiumed too!  Nigel and my uncle Dave went 2nd/3rd in their AG and my aunt went 2nd in hers! 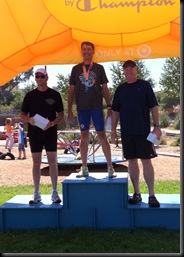 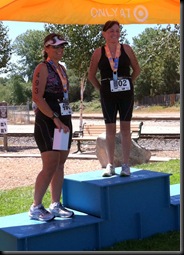 Thank you for obliging me! First of all your transition times are insane! Second, the photo of you running is awesome you look so strong in that photo. Nice job and I hope you survive the week!

You are so speedy, Molly! Congratulations on a great race. I have no idea how you transition so fast!

Congratulations on a great race and those insane transition times!!!!

Great photos. You rocked it Molly! All your good training is really paying off, congrats!

Congrats on your huge PR Molly!! How exciting. Many more PRs to come this season I predict... ;)

You always make me smile. A long run to T1 and you came in under a minute? LOL...

Well done!! Thanks to Meredith for keeping you on your toes! Crazy week OR NOT!!

Haha, oh no, swim time included the run to transition! My actual time out of the water was 29 high.

Sweet race -- way to rock it!!! Congrats on your placing. As several have already mentioned you are looking fit and fabulous!

Congrats on the hardware and a great race! I love the swim photo, very serious ; )

What a great race! Not sure which is more impressive, the PR's or those ridiculously fast transitions.

Yeah!!!! You are getting FAST! Love that all of your hard work is paying off.

Awesome job! So fun to watch you break through one barrier after another. Inspires me more than you'll ever know. Congrats on a great race and new PR!

Holymoly Molly! What a great race for you! You're doing so well! And that run pic of you is totally badass. :)