We've got a rain storm coming in tonight and I. Can't. Wait.  I've been sniffling my way through a bout of allergies ever since we got home last week...pretty sure that's cause it rained while we were gone and now everything is blooming and thinks it's spring already!  I need a little bit of rain to tamp down all those allergens for a few days.

I was s-l-o-w and dragging in the pool at 5:30 this morning.  A little sniffling isn't a big deal on the bike and run but it does complicate breathing when swimming! I swam hard for as long as I could and when I felt my form truly slipping, I put the paddles and buoy on.  Don't judge, Coach says they are good for me.  After I got back from the office this afternoon, I put in my time on the TRX for a strength workout.  My core strength has come so so SO far in the past few years, and most of those gains have come in the 2 years I've had the TRX here.  I haven't tried anything that challenges my core as much.

I'm still tickled pink about putting in a solid week of work last week.  Not that I've been slacking but I trained on my own for December and took my recovery from IM AZ seriously, and then January was just easing back into regimented training.  February is clearly where we start gearing up a bit!

Last week was just the beginning of picking up the weekly volume! 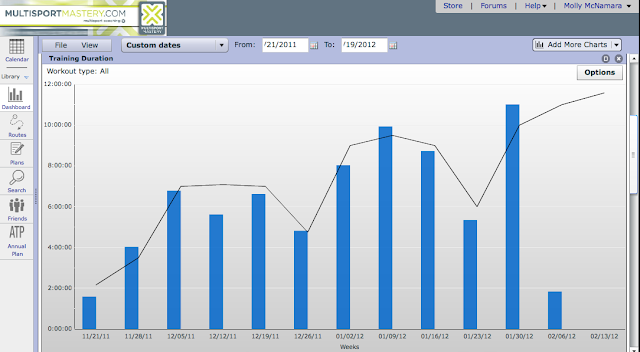 I've been chuckling because my bike volume will likely look deceptively low this year.  I'm using a different trainer than I did in past years...Coach suggested I use Jeff's trainer instead of mine, as it's a bit tougher on me.  I still put out my intended watts for each workout but I just seem to have to work a little harder at it.  The interesting thing is that for whatever reason my speed/mph is way way lower on this trainer for the same power output as the other one.  So a workout that would have averaged something like 16mph on the old trainer is a nice speedy...12mph on this one :-)  Hence, I'm not going to worry about trainer mileage because I know I'm putting out quality watts for the workout!

One of my favorite geeky things to do in my TrainingPeaks account is look at the Performance Management Chart.  The short version of how the chart works, from the TP site, is "just remember the blue line represents your fitness, the pink line shows your fatigue, and the yellow line shows how fresh you are."  I like to look back all the way to when I started with Coach in fall 2008 and see how far my fitness has come.  You can see the blue line build to IM AZ 2009, then drop as I recovered, build to Austin 70.3 (my A race for 2010), then drop as I recovered (but not as much as the year before), build to IM AZ 2011 (new peak fitness!), then drop as I recovered (again not as much as the previous year), and now it's juuuuuust starting to build again.  I love seeing a quantitative measure of increased fitness from season to season! 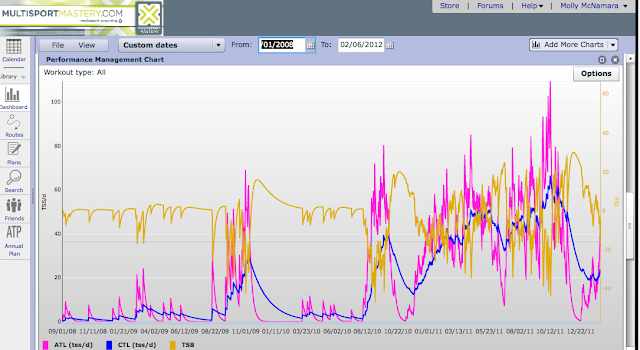 I'm playing around with nutrition again for this season, using some things from last year and trying new things.  It's what makes this time of year so much fun!

Happy training!
Posted by Molly at 5:00 AM

I love to geek out with the numbers from training. It is so much fun to watch!

Great job on the training you are doing right now!

Yea, teh ELF suggested I buy a new trainer too, after I maxed out my cheapo trainer.

LOL! I love the numbers but you are way geekier than me! All I see are pretty colors in that last graph!

Get a computrainer LMM, it will change your life. ELF doesn't love it as much as I do, but man....best thing I ever bought (tri related).
Nice, cute graphs. :) I know you love all that TP stuff!!!!!

Don't beat yourself up... you actually got out of bed before 5:30am, you deserve an award already!

Cool! Love seeing the dips aren't as low and the peaks are higher. Keep up the geek work! (just HAD to say it -- just HAD to)

Allergies suck. Personally I've found, that the cleaner I eat, the less allergies I have. As soon as I eat grains, my nose starts complaining.

Enjoy your weekend, hopefully allergy-free and with lots of training fun.