After a whirlwind trip to the east coast (only 36 hours on the ground there) - more on that in a later post - I was back in San Jose Saturday noon to the news that the Metro Triathlon, where I was to race the Olympic distance, would now be a duathlon due to some water quality testing issues with the city.  Not ideal, but not much you can do about it so I did my best to throw all my race gear together and prepare for Sunday.  I also arrived back to a massive heat wave - mid-April and it was over 90 when I landed!  Race day was forecast to get into the 80s so I knew it would be a rough one.

The race site is only a few miles from my house but I got down there pretty early to get a good transition spot.  One advantage to a tri club membership was preferred rack space in transition!  Before too long, my aunt and uncle and Kristi and her husband were all arriving so we hung out and chatted and got ready.  My mom came to spectate and took all the great photos!
I was amazed at how warm it was already that early in the morning.  Usually we race at Lake Almaden in June and are shivering before the start but not this day!

Kris and I hit the portapotty line 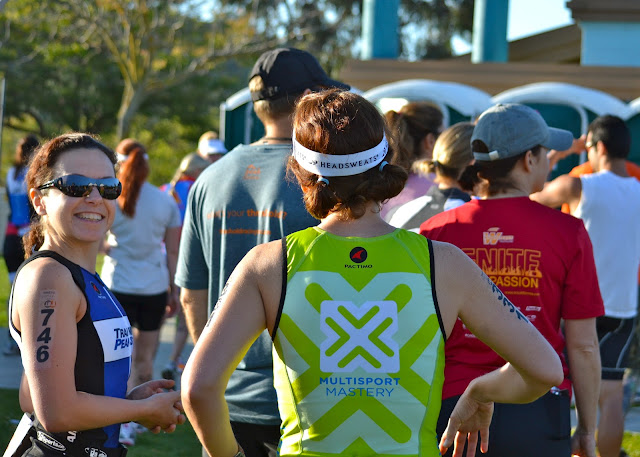 and then we were off for our warmup run! 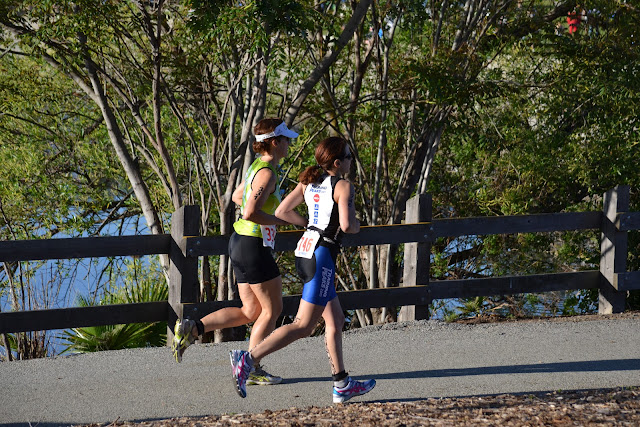 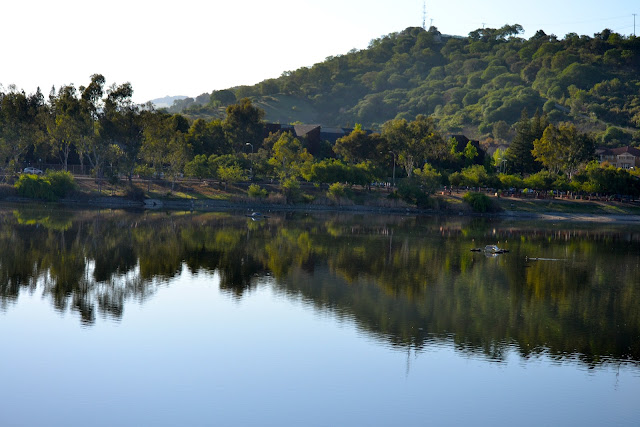 After watching all of the sprint waves go off and then all of the male Olympic waves, it was finally time for the 39 and under women to start.  In place of our 1500m swim was a 1500m run around the lake! 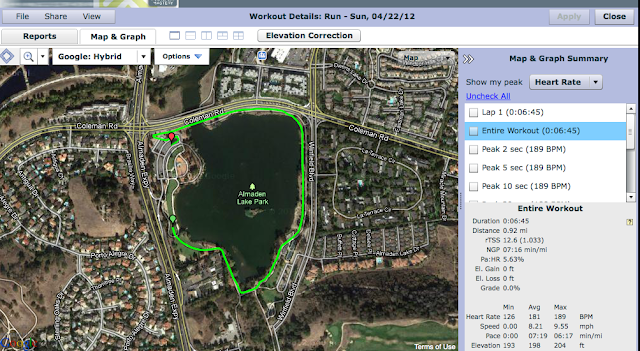 I look happier than I felt at this point.  Even with a planned build through the mile the effort was starting to hurt a little and my body was letting me know it was not happy about two big travel days before the race.  Right after this my mom yelled "Go Mimi!"  Um, that's my sister's name. 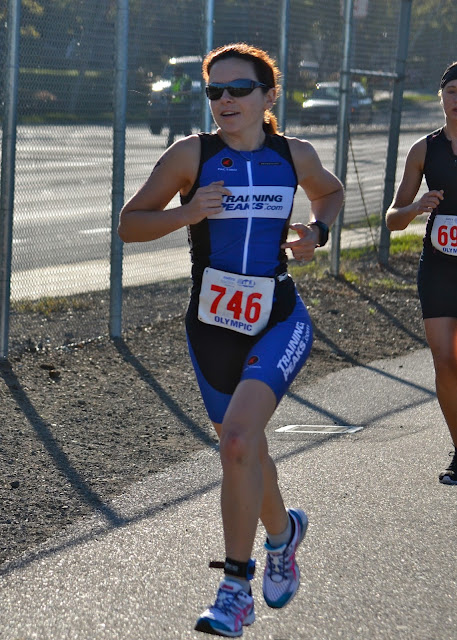 T1: I had to dash through all of transition to get to my spot and the bike out but I was reasonably fast.  My Garmin says 0:53, the official time says 1:13.  Maybe the mat was closer to the mount line than I thought when I hit my watch but that's odd.  Anyway!
Time to bike! 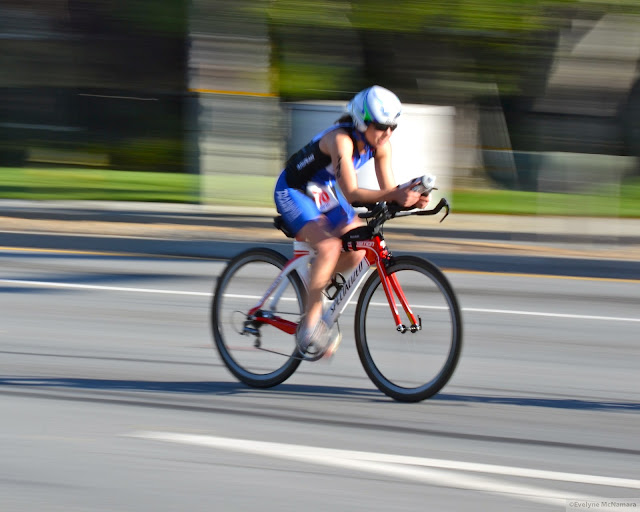 I had very specific instructions for this bike course and I'm pleased to say I nailed them!  Heading south towards Morgan Hill, we had a strong headwind but I just held my watts on the target and stuck with the plan.  On the biggest climb of the day, I spun up easy and yet passed everyone ahead of me who tried to hammer it, and then I made the return trip to town with the last 8 miles all well over 20mph! 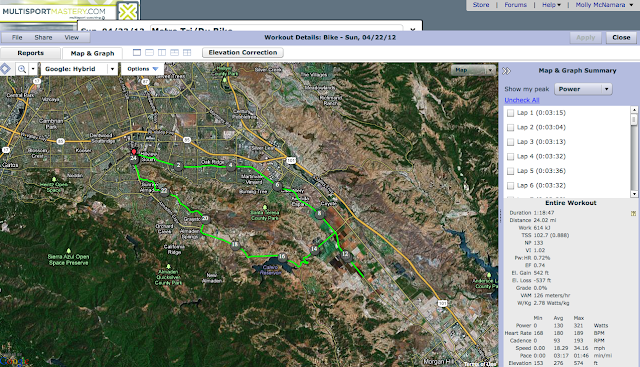 Elevation profile for the course 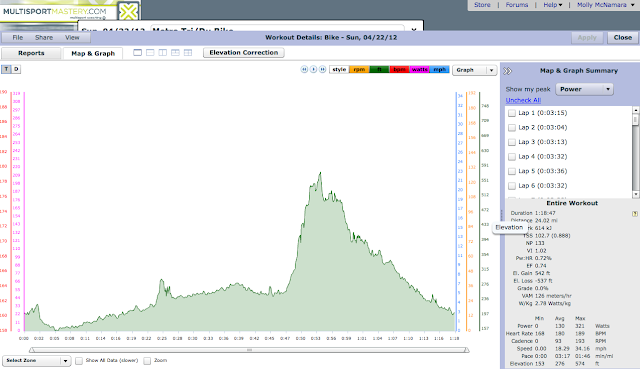 My instructions from my coach were to average 125-130 watts on this course (before you judge, remember that power depends a lot on weight...and I'm basically just barely over 100 lbs - so my power-to-weight ratio at threshold is not that bad).  I put my Powertap CPU on Average for the power reading and just biked my buns off.  End result: Average power of exactly 130 watts!  And at a nice high cadence as well.  My VI (Variability Index) number shown below was 1.02, meaning I did a darn good job of riding this course evenly!  This all equals a happy coach :-) 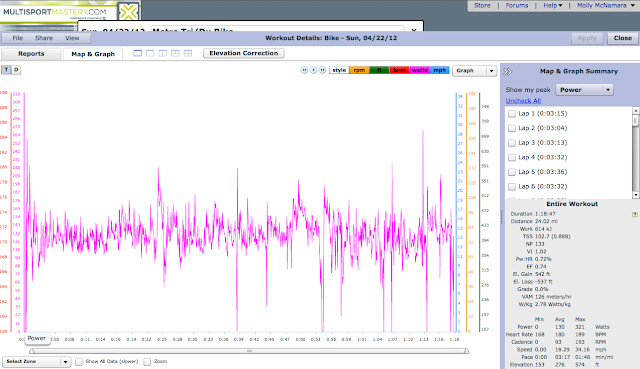 While I was off biking, my mom and her camera were hanging out at the lake! 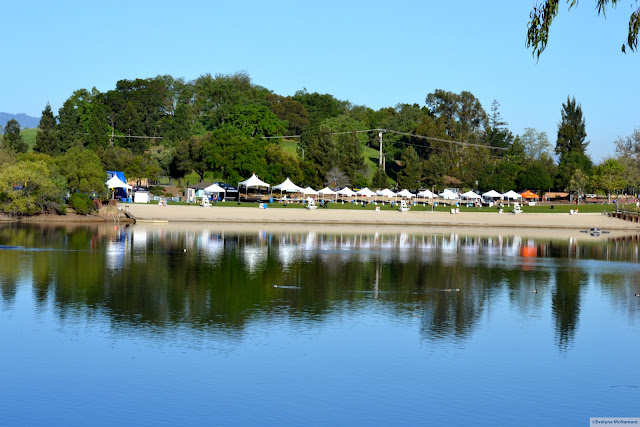 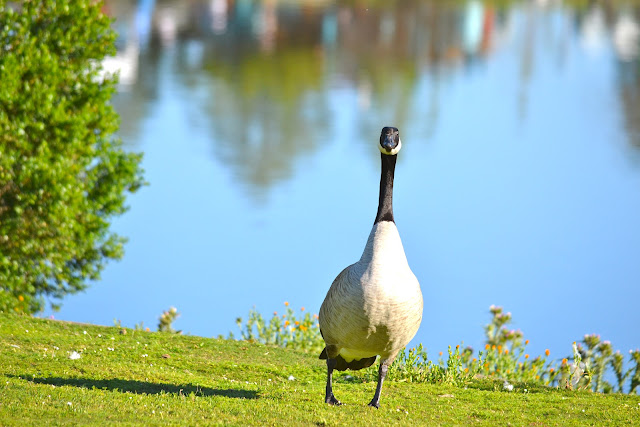 And then time to run again!!! 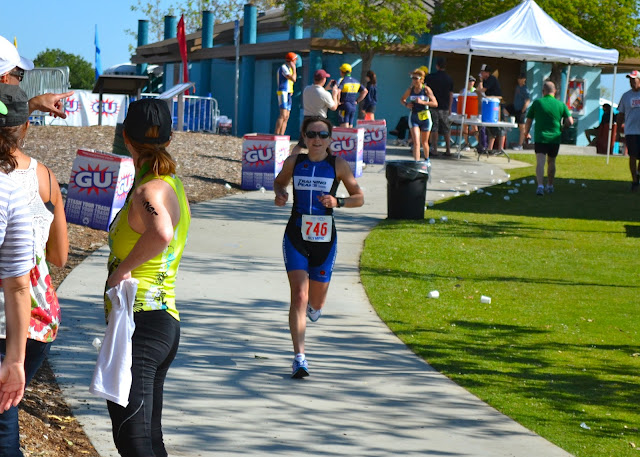 By this point, it was getting REALLY hot.  I had a bit of a sloshy gut from the bike, as I had taken in all of my calories but probably could have used more straight-up water because of the heat.  I started out the run just taking in a lot of water and my salt tabs to settle my stomach down.  As per my plan, I took the first mile fairly easy (the first mile off the bike always goes fast for me but no reason to make it hurt with 5 more to go after that).  Then I spent the next few miles just focused on keeping the effort steady-hard and getting from one aid station to the next, where I'd dump water on my head and chug a cup of it as well. 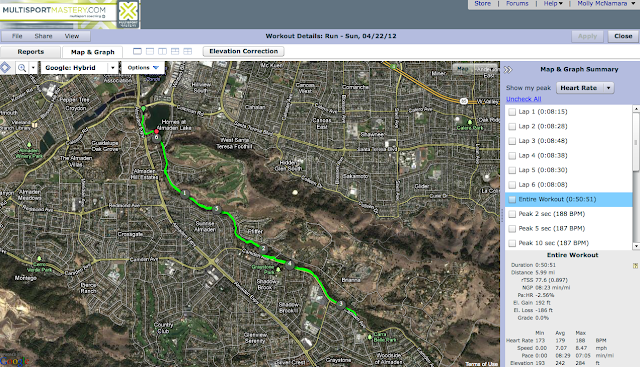 Around 3.5 miles in, I was passed by a 57 year old woman who was throwing down a smoking pace in those conditions - totally impressed.  Over the next mile or two I started to realize I was feeling better and getting faster and starting to catch up with her again!  She turned out to be a great pacer to keep me going late in the race! With about a mile to go, as per the plan, I picked up the effort, passed her and pushed on through to the end.  My last mile was my fastest of the day! 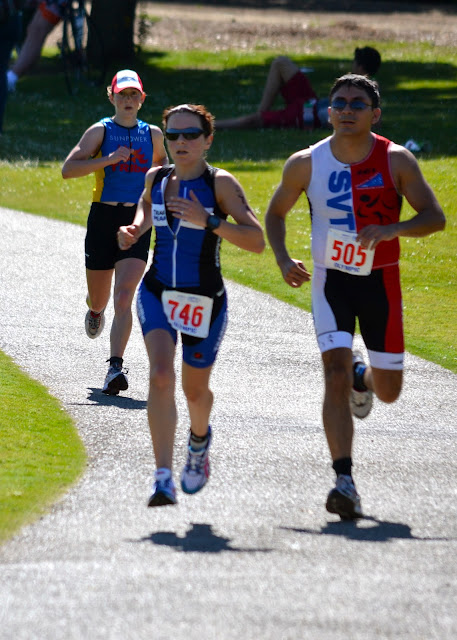 Sprinting to the finish line! 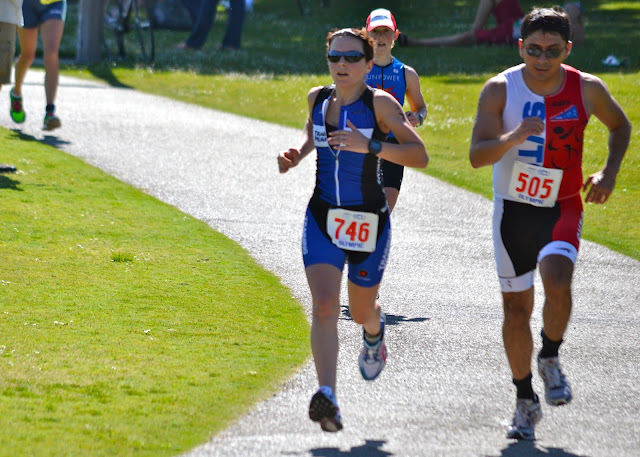 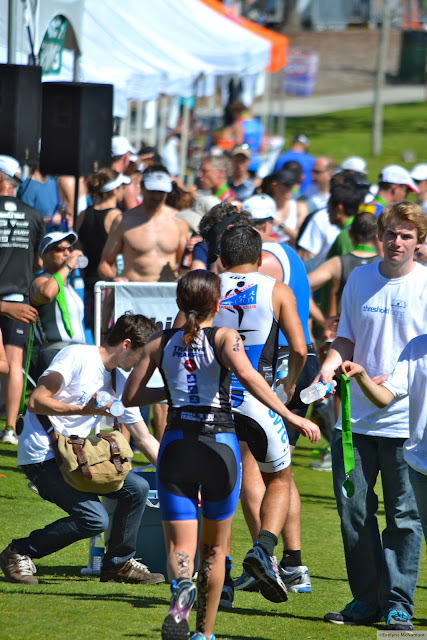 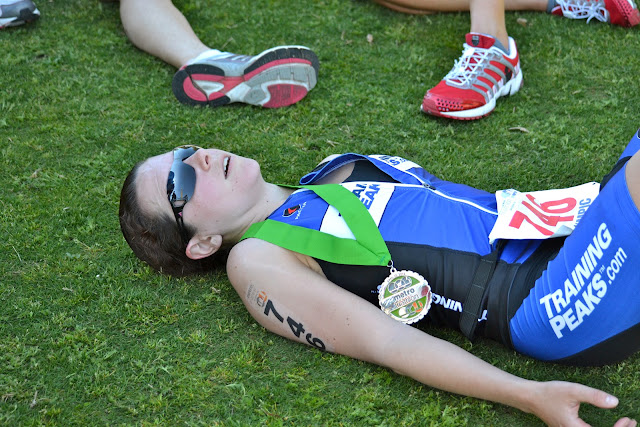 My performance ended up being good enough for 4th in my AG, which is really just icing on the cake.  I'm most proud of sticking to my plan, getting my bike pacing SO right, and holding it together on my run to finish strong.

Thanks to my coach, for never giving me more than I can handle (even if I doubt it sometimes LOL) and yet always challenging me to be better.  Thanks to TrainingPeaks for letting me race with your kit this year and tell people all about my favorite training tool.  Thank you to Dr Brink at Premiere Spine & Sport for fixing all my aches and pains and keeping me healthy while training.  And thanks to Concept Cyclery for cleaning and tuning up my bike for this race - it's about time all the IM AZ dirt was cleaned off of it!
Posted by Molly at 3:45 PM

Wow - super speedy especially in the heat. Congrats on your AG place and nailing your race plan so well.

Congrats on a great race!! Love the pics!

Awesome job (and race report), Molly! I'm a data geek and am thinking about switching over to TP from the service that I'm currently using, so I really appreciated the fact that you included screen shots. It's been a few years since I personally used TP and I found it very helpful to see the software in action. :-) Nicely done all around! I mentioned this on FB, but kudos to your Mom too. She captured some very nice photos of you (and the goose)!

Ooooh reading this makes me want to work with power!

Mostly though I just want to say CONGRATULATIONS on a wonderful "to the tee" effort!!! I'm so proud of you -- I can imagine how coach feels!

And your mom got some great shots thanks for sharing!

^^Every athlete should work with power. Your coach would love that :)

Molly, you nailed it! I love how you worked your low VI into this report :)

Wow, that is way too hot for this time of year. Congrats on such a great race in those conditions.

Great race, Molly! You look like you are flying in those run pictures.

Yay! So proud of you for nailing the entire race!

And seriously, I've finally gotten the hang of smiling every time I see a camera thanks to you but now I apparently need to learn to have both feet of the ground in every photo!

You look great in your Training Peaks Kit, I can't imagine a more perfect Ambassador for them!

Congrats, I love hearing races where the last mile was the fastest. I was thinking you look short in the pictures, and you weigh basically 100 lbs. That is small. :)

Huge congrats. You rocked that race.

Great job on your race!

I love the pics!

Great job Molly! That's a blistering running pace...I'm still trying to work up to a 10:00 mile for just a 5K!