On Saturday I got to do my first multisport race of the year, a tough little duathlon up in the East Bay hills.  I knew the course would be hilly but...yeah. It was hilly.

Run #1 elevation profile. Down to the dam and back up again, mostly on squishy muddy trail.  Note that nice steep hill at the end of the run.

The bike elevation and heart rate. Pretty much my HR was through the roof the whole time, with recovery possible on the downhills.  Roughly 1600 feet of climbing in 19 miles.

Run #2.  Like Run #1, with all the hilly fun and mud. And the finish is right at the end of that steep fucking uphill again.

I got up to the San Pablo reservoir bright and early about 90 minutes before the race start.  It was 30 degrees out at that point.  Um, good thing we aren't swimming?  I did a quick setup in transition (bike, helmet, shoes - duathlon setup is easy!) and then stayed in my warm car waiting for my friend Stacey to arrive. 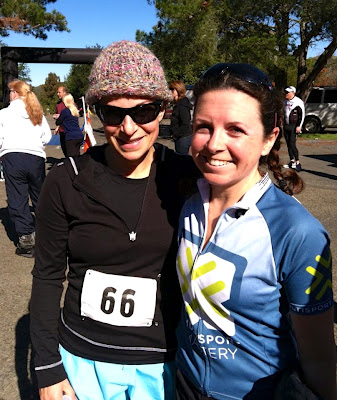 It had warmed up to about 32 by the time we lined up at the start.  Yay?  Well I knew once I got going I would be warm at least.  I haven't felt 100% since returning from Central America (took a while to kick a stomach bug from the trip, work stress, etc) but I was eager to kick off racing for the year and set a baseline for where my fitness is at.  I fully expected this race to HURT and it delivered.

I'm 2nd row back, to the right, in the blue Multisport Mastery jersey and the hot pink armwarmers.  I think those lasted about a mile into the run before I shoved them into my bra.

Without too much fanfare, the race director counted down and we were off!


The run began down a steep hill to the lake, then along the lake on a dirt trail to the dam and then back up to transition.  The return trip was...uncomfortable, to say the least.  BUT I did run my fastest mile ever along the way, so that's a nice indicator that even when I don't feel like my legs are in the shape I want yet they are getting there.

I came into transition ~5th or 6th place woman and passed all but one of the women ahead of me in transition and the first 100 yards of the bike course.  In and out of transition in 36 seconds (fastest of all the women and nearly all the men - hit one of my race goals there!). 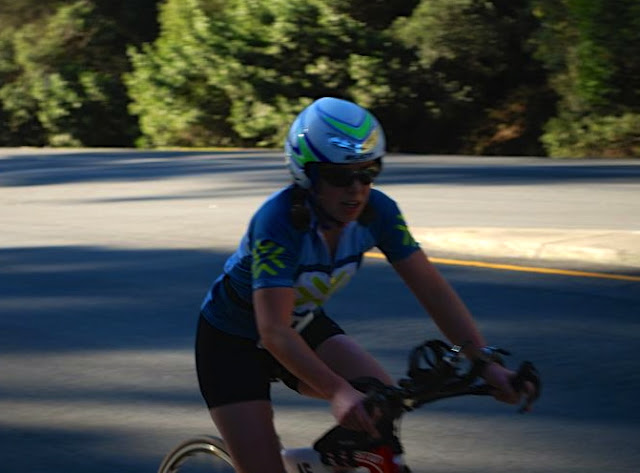 The bike course was a very popular riding route known as The 3 Bears loop.  I don't live close enough to have ridden it but I could see why it's so popular - it was a beautiful loop on mostly nice pavement, some challenging climbs and minimal traffic.  The three big climbs are - duh - Mama Bear, Papa Bear and Baby Bear.  Mama Bear and Papa Bear f*ck with you by making you climb climb climb, then give you a short downhill and then you climb again.  Baby Bear is just one short STEEP little bastard.  Not knowing the course, I was a little unsure how long some climbs would last and conservative in my gearing.  But I redlined it as best I could and my power data shows this was a good race for me.  My 20-minute average was at my bike test watts, for a race that took me substantially longer than that, and overall my numbers were really high.  I was passed by 3 women on the steepest descent at the end, as there were some large bumps and cracks in the road and I was cautious descending at 30+ mph.

Given that, it's no surprise that I came in off the bike with pretty tired legs!  I dashed through transition in 23 seconds (fastest T2 in the entire race, another goal nailed!), waved at my friend Shannon who came to spectate, mumbled something about "that was painful" and took off for the second run.

I tried to just let my legs carry me downhill to the turnaround, knowing I'd have to return back uphill.  I passed one of the women ahead of me in transition and another within the first 1/2 mile of the run.  As I neared the turnaround I was able to assess my position overall at 3rd place woman and held on to that to the end.  The return trip uphill on the trail was NOT pleasant - I very badly wanted to walk - and the final steep uphill was miserable.  But then the finish line was there and I was done!  I'm sure Shannon was happy I didn't barf on her shoes immediately upon finishing either.

As it turned out, my race was good enough for 2nd in my AG and the aforementioned 3rd woman OA. 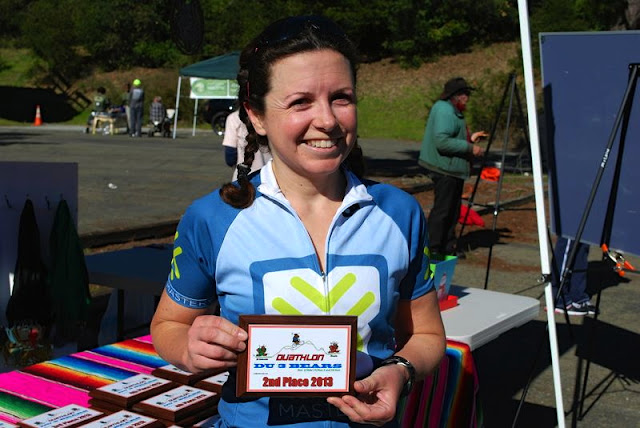 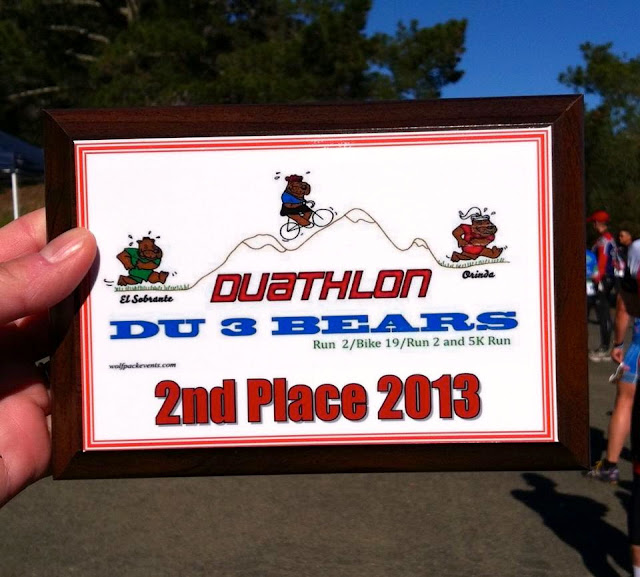 Hanging with Stacey and her husband Mike, who'd done the relay, and super-spectator Shannon 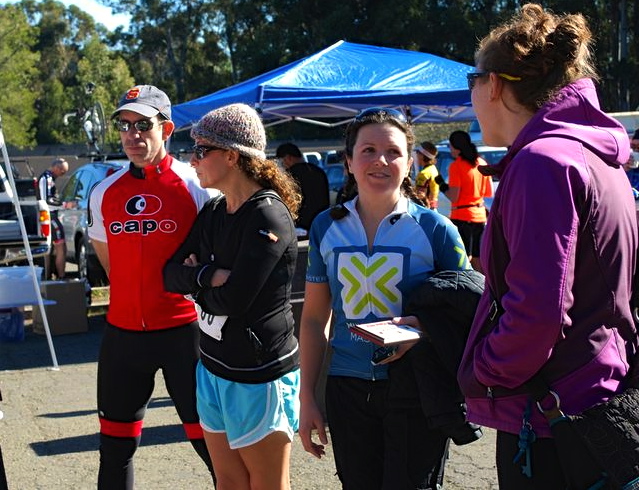 Stacey and Mike came in 2nd in the relay 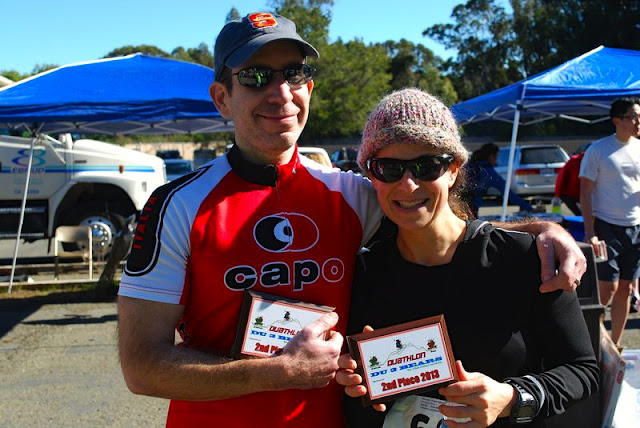 I enjoyed my well-deserved rest day today with no swim, bike or run.  Stanley really thought I should get off the couch and do something fun with him. 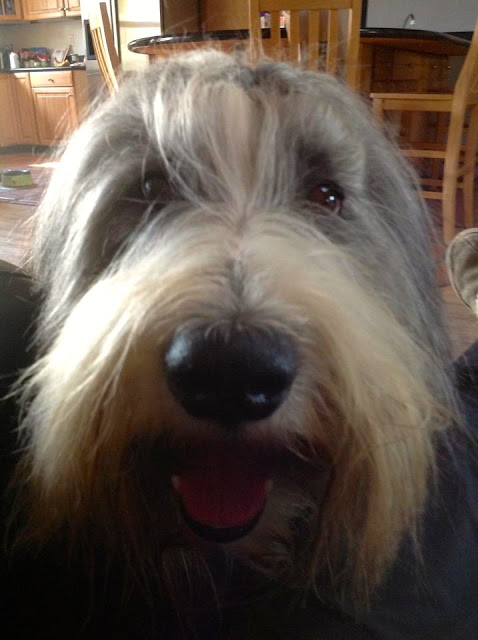 I finally succumbed to boredom and did some light yardwork - raking and weeding - this afternoon.  Max suggested I call him if I needed help with digging anything up, that's his specialty. 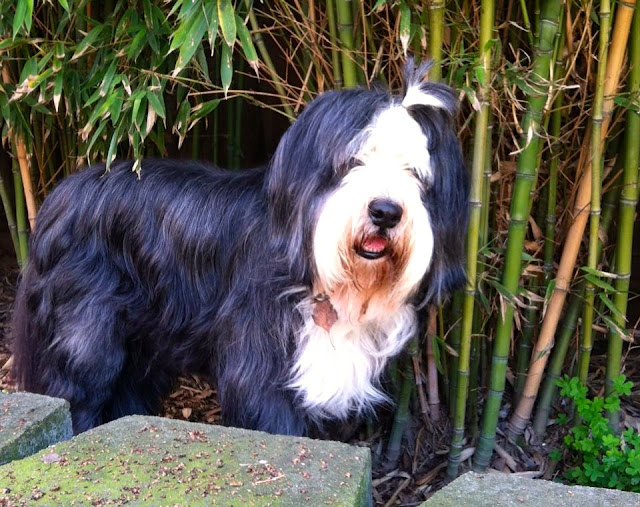 I hope everyone had a nice weekend!
Posted by Molly at 8:51 PM

Congrats on the hardware! Always fun to take something home. Looks like a tough race.

congrats on a great race!

whoa! You are amazing! Great job!

Great job on your race Molly!! That's awesome that you were able to dig deep in the uphill on the run and not give in to the desire to walk. Nice job!

Congrats! Great way to start off the du/tri season.