Today’s race has me musing upon many things in triathlon…potential, hard work, pain – you know, all that good stuff. I couldn’t help but think about my first triathlon at this same lake, 3 years ago, the sprint race that they held yesterday. And to come back and do the Olympic distance and succeed in all sorts of small ways, from hydration and fueling to sunburn and chafing…oh that felt very very good. I could not be more grateful for my wonderful coach, who pushes me to new levels of discomfort in order to help me reach my potential – none of this would be possible without her!

I was up at 4am and on the road by 5am. Perhaps a little silly when the race is a 5 minute drive away but I had some ideas about where I wanted to be in transition and I wanted to be there early. So, 5:15 and I was in line to get in transition, which didn’t open till 5:30. By 5:45 I was all set up and had nothing to do but drink, hit the portajohn, drink, hit the portajohn, etc etc.

Jeff arrived just as I headed down to the water about 25 minutes before my wave. And so, you get my thought bubbles to go along with the photos he took (and 1 from my friend Mary, wouldn’t want to leave her out!). 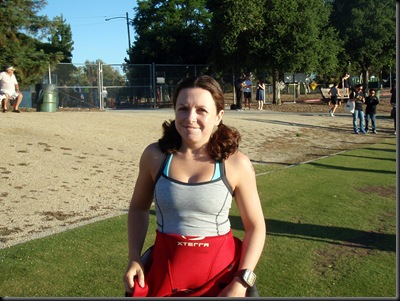 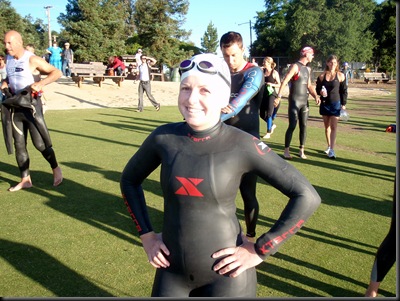 “I can’t believe people have rubber fetishes. There is nothing sexy about this.” My wave preparing to start the swim (I’m the 3rd on the left up front). First we swam out to that yellow buoy on the right, then proceeded to zig zag all over the damn lake. People were swimming on both sides of the orange buoys and guess what, it’s not easy to see yellow buoys when swimming into the sun. It felt a bit like chaos out there but I just tried to maintain control of my own pace and breathing.

My swim time was a bit longer than Knoxville but I think looking at other times this might have been a slightly longer course too, with all the turns (Knoxville was a nice straight-line swim). I was OK with it, as I still came in within the range I would expect. 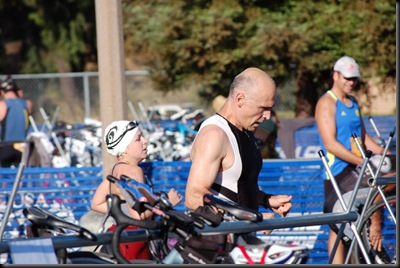 Transition was set up as a big loop with traffic only flowing one direction. That meant no matter where you set up, at *some* point, you were going to have to run longer. I decided I would rather not run long with my bike shoes and so I set up near the bike exit. I still had to run through all of transition in my wetsuit but I definitely got it off and my bike gear on quick – I was in and out of there in about 95 seconds. 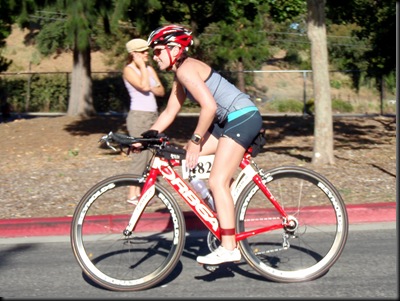 I headed out on the bike course feeling good and excited to see how fast I could go on my local roads that I ride often. For once I was able to stay aero for the vast majority of the race – smooth roads and no traffic make such a difference. There is no doubt I felt a home field advantage today – I knew where every pothole was, I know where the glass winds up on the road, I know where there’s a false flat that is in fact uphill and not to worry about going slower, I know the usual wind patterns – and it paid off in my gearing along the way as well as knowing when to expend the effort and when to hold back. I ended up biking 15 minutes faster than Knoxville last month and averaging a thrilling 17.6 mph. 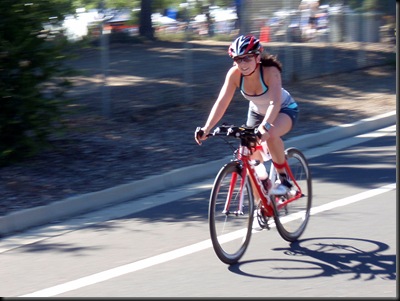 I got my feet out of the shoes before dismount and ran barefoot through transition. I am loving this sockless racing thing! Even with having to run my bike all the way through the transition loop again, I was in and out in 79 seconds. 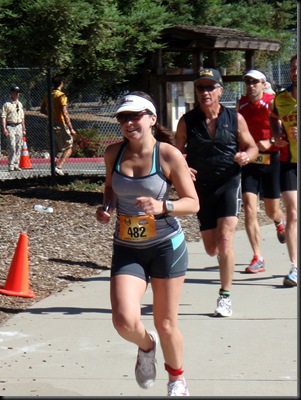 “Wheee! I just passed those 3 guys right out the gate! My legs aren’t feeling all that zippy though…”

The run was HOT, temps were edging into the 80s and most of the course was in direct sunlight. I had a pacing/fueling/hydrating plan in place and just tried to keep moving forward and stick to it. I thought of camp a lot, when Jen Harrison had talked about core strength and how much it pays off late in the race when run form starts falling apart. I focused heavily on trying to maintain good form while it was starting to look like a death march out at the far end of the course. I reached the turnaround for the final out-and-back, practically within view of my parents’ house, and knew there wasn’t much left to go. At Knoxville, I’d come within 10 seconds of my open 10K PR and I had wanted to do that today but I was starting to doubt I could maintain a strong enough pace to get there. 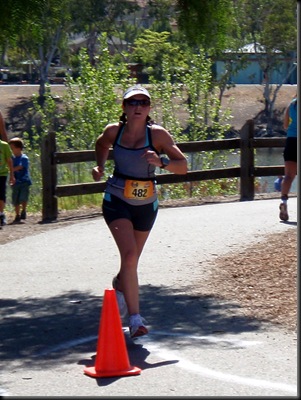 “This HURTS! Almost there…” 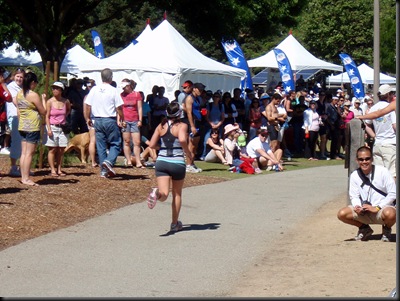 Heading down the finish chute, so sweet to finally be there!

As it turned out, I did beat my 10K PR by 1 minute! Sheesh, maybe I should always go ride a bike before my running races because that certainly seems to work for me.

I was pleased with my overall result too – an 11+ minute PR over my time at Knoxville despite a much slower swim. I may finally be learning that not all improvements come easy and that I need to hurt, sometimes a lot, in a race to earn it. I know that sounds silly but…you know…I don’t really like to hurt! Today, it was well worth it though. 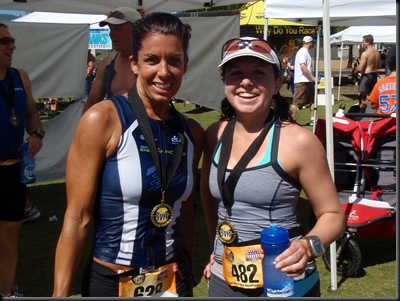 Heather and I both raced today with a good friend in mind - when she passed me with just a couple miles to go on the run, she spurred me back into action with a quick “Do it for Missy.” There’s no doubt we were both wishing she could be there today. 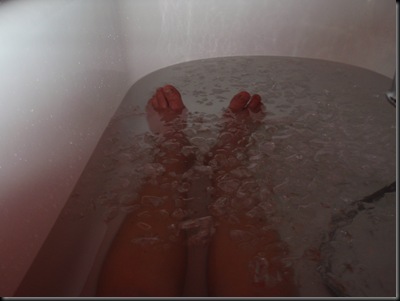 “Dear Legs, thank you for cooperating with all the abuse I put you though. I now know you were actually cranky this week looking for more action than I was giving you. I hope that today will suffice for a little while. For the next week, there will be no swim/bike/run for us; it’s time to rest before we gear up for the next challenge.”

wonderful recap and great job! I am so inspired by your kick-butt spirit this year. whoo hoo!

You amaze me every race. Your hard work and dedication pay off in your race results and in your dog activities. Way to go Molly.

Oh and I LOVE your race outfit!

Great report Molly! Very inspiring to see how far you've come! 17.6 mph IS thrilling!!! Keep it up (after resting as coach directs of course -- lol)

Great job today! It was hot. You did awesome. So much fun to ride on "our" roads!!!

Congratulations!! PR and pulling through. You rock girl!

Interesting tactics and amazingly fast transitions. I never would've thought about where to put my gear in the transition, except to make it easy where I put my stuff. Learned a lot from this post.

Wow, congratulations on a super strong race Molly! Ann 11 min improvement over Knoxville and a 1 min PR on the run? Stellar!

Congrats on yet another PR...good grief! You are having such an awesome season! I love that first bike picture...you look like you were born to ride!

molly - awesome awesome!!! fantastic race. you are killing it this season!

You look SO strong... and BUFF! Your accomplishments this year just blow my mind, but I also know how hard you work and what an awesome Coach you have pushing you. You and Liz make a great combo!

You have inspired me to work on transitions once and for all. Since my face plant at a dismount in T2 over a year ago, I haven't had the balls to get back on the horse. Your smokin' times just encouraged me.

You are so funny. Does this wetsuit make my butt look big? :-D

Congrats on a great race AND a 10K PR! Sweet!! You are knocking them outta the park!! Maybe I can hire you for my run coach :-)

I getcha on the hurtin part. I spent 86% of my bike ride this weekend in Zone 3. Despite my crappy finishing time, that was a huge effort over Knoxville. I was pretty amazed...

You just don't stop with the PRs!! :) Congrats on another great one Molly!

WOOHOO!!! Incredible that you ran faster than your standalone 10K PR!