The Joy of Running

When I first started running, I used an old Target pair of sneakers – I quickly learned that there is a reason running shops exist and gait analysis is important.  My first real pair of running shoes was the Brooks Adrenaline GTS, ~2006 model.  Later that year, Brooks upgraded to the next year’s model and suddenly they didn’t work for me –> ankle and knee pain.  *sob*  Here I’d loved these shoes and suddenly I had to give them up.

From there I switched to the Mizuno Wave Inspire, which were lovely but seemed to wear down faster on significantly less mileage than my Brooks had.  I couldn’t afford to keep up with them!  About 3 years ago I ended up switching over to the Asics GT-2130s, followed by the 2140s and 2150s (I think the 2160 is coming out now).

I’ve had no problems at all with my Asics, and I also race in a lighter Asics model, but I still began to wonder if after all these years maybe the latest Adrenaline GTS would work for me again.  So I bought a pair and began to alternate them with my Asics on runs the last few weeks.

Today I wore them for my long run with hill repeats and while I can’t pinpoint anything in particular, I decided they just don’t feel as good as my Asics feel.  Especially in terms of downhill cushioning.  So it seems for better or worse I am an Asics girl!

The rains started last night and while I got lucky to not get poured on while running it was still dark and wet out.  The creek was raging from all the runoff. 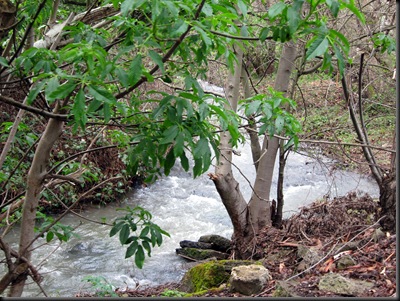 Running up up up one of the local favorite biking hills. 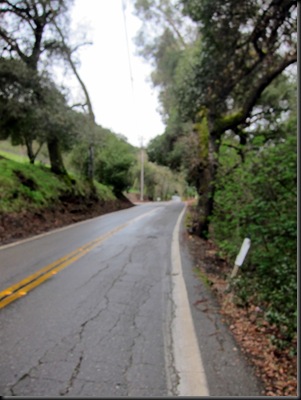 I dressed in very bright colors so I was visible to cars – there’s not a lot of shoulder on the country roads. 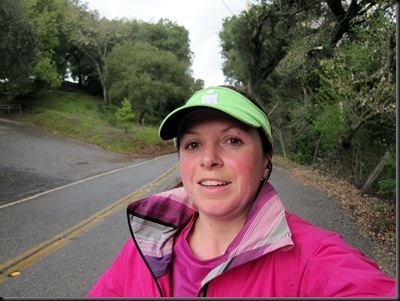 OK, so despite what I said yesterday, maybe even on a rainy day, you might be jealous. 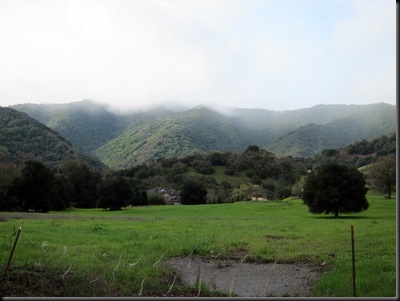 Despite a really cruddy-feeling warmup, I felt AWESOME on the hills and managed a nice steady pace for every climb.  Wonderful way to end the week!  Now if I can just drag myself back out to grocery shop for the week…

Beautiful pictures! If it's anything like Colorado, it'll be brown by the end of June.

Nice job on the hills!

I have a similar running shoe history! Started with a pair off of amazon just because I liked how they looked. :>X From there got fit into a pair of Mizuno's only to have them breakdown on me quickly. Went with Asics for a while and now I am in Saucony's. :>D

I love Asics! I am on my 5th pair of Gel Kayanos. I have tried others and they just don't feel like "home" to my feet. I just bought a pair of their GoreTex trail runners so I can do trail runs with the doggies. They are great for trail running or hiking but too stiff to just wear around town on rainy days :(

great minds, indeed! :-) I went through Brooks Ad. GTS, Mizuno Wave Inspire, had some Zoots on the side, then K-swiss. I'm thinking I might need to look at these Asics :-)