Race morning started off dark and early with the alarm at 3:45 am.  Surprisingly I had no trouble sleeping solidly once I'd finally given up on reading and turned off the light.  I was tempted to hit snooze but I knew I needed to get going.  Copious amounts of sunblock applied to the body, followed by clothes, loading my bottles on my bike, grabbing breakfast and hitting the road just after 4am.  Going over The Hill (what we call the mountains in between our valley and the coast) on Highway 17 I encountered some night construction and lane closures but had adequate time to get to my usual "super secret" parking area and roll down the hill into transition.  Which was supposed to open at 5 but was already open and filling with bikes when I arrived at 4:58.  Still I nabbed a prime spot right between the swim in/bike in-out/run out.  My transition area was set up by 5:08 and then I just had to wait! 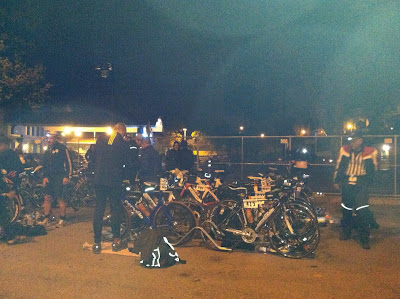 Thankfully not too long after that I found Jill and was able to harass her in between stints at the portajohn line.  Before long it was time to start the walk down to the beach for the pre-race meeting and a warmup swim. 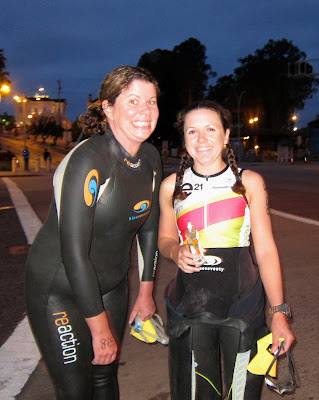 We found Jeff and Nigel waiting when we got to the beach.  Surprisingly I was really not nervous - I felt very steady and just wanted to get on with it! 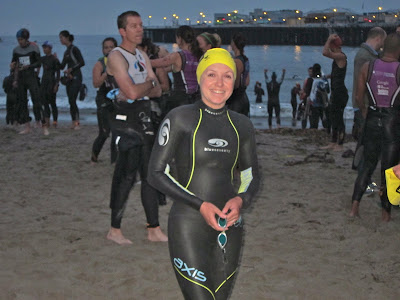 I was having enough fun to ham it up for the camera with my "game face."  Jill's coach was one of the race announcers and she kept us entertained while we waited. 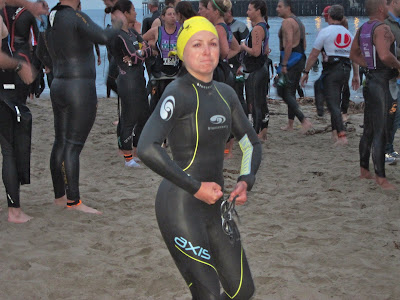 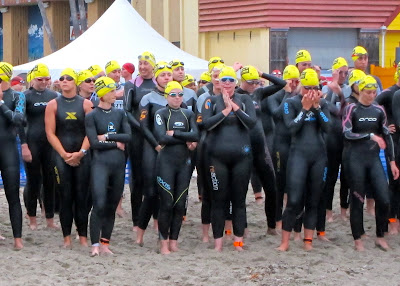 Yes, I really was the smallest person in my wave.

And then finally we were off! 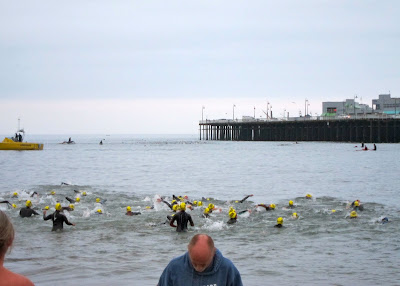 For a 1.2 mile swim around the Santa Cruz pier, with nary a buoy in sight.  The only 2 turn buoys were over 1/2 a mile offshore and not visible over the swell until you got really close to them.  It made for some interesting sighting! 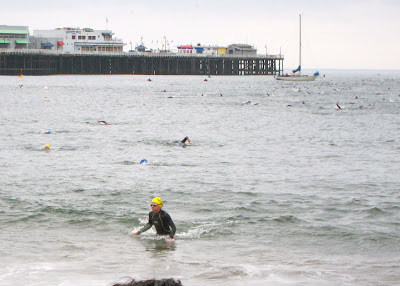 In the end, I emerged from the murky and cold Pacific in 47:20, over 2 minutes faster than my best 1/2IM swim.  With all the sighting issues involved, I'll take it! 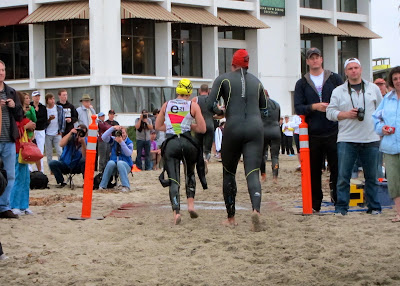 And then it was off for a long run (over 1/3mi) up the beach and through the city streets to transition.  My actual time in the transition area was pretty short and despite the complete absence of one of my nutrition items for the bike (thanks to the men racked around me), I was on my way before long.  T1 time, including the run: 4:15. 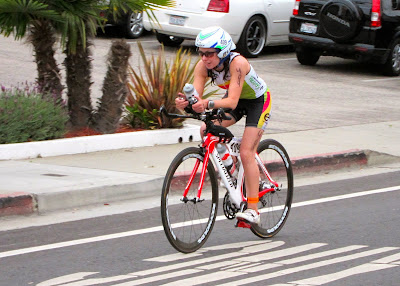 I had actually been very nervous about the bike leg of this race since test-riding a portion of it last weekend.  It was relentlessly hilly, which I hadn't remembered, and my confidence was shaken a bit.  Still, I came up with a plan of attack and intended to stay strong and positive to execute it. 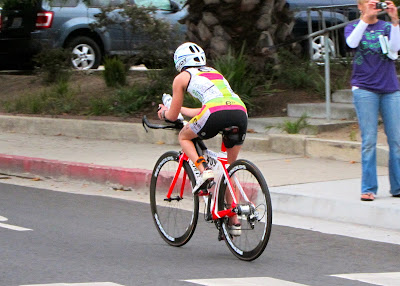 As it turned out, the bike felt FABULOUS!  I've never done a 1/2IM ride that felt so great where I didn't spend the last 5-10 miles wishing for it to end already.  Yes, it was hilly.  Yes, it was windy - so windy that it took me 12 minutes longer to return to town that it took to make the turnaround.  But I just felt steady throughout!  I attacked the downhills (because at my size gravity is not enough to get down them as fast as I want) and I held back as I spun the uphills (yet still passed people who'd fly by me on the downhill and grind to a halt going up). 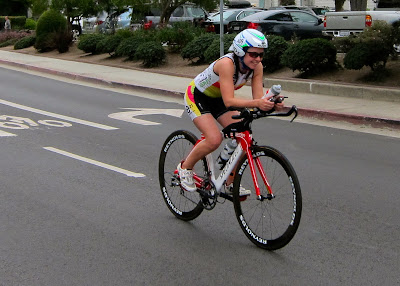 I was very quick in and out of transition (0:37 with the 8th fastest T2 of the entire race!) and then it was time to RUN! 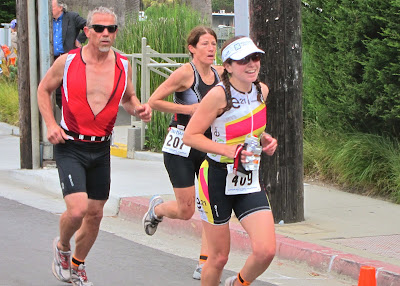 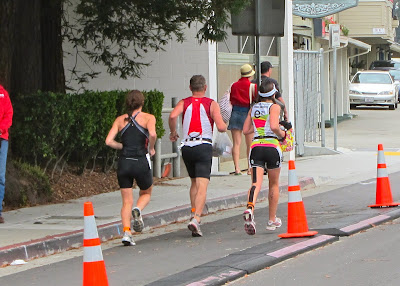 I made sure to dial my pace back heavily in the early miles to save something for later.  Jeff and friends biked down the road on my course for a couple minutes to cheer for me before I told them I had to stop talking and focus! 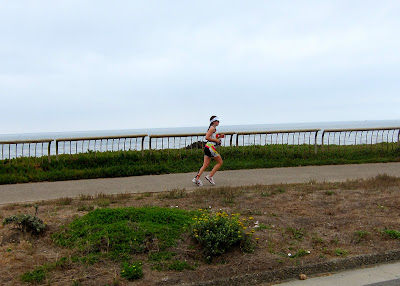 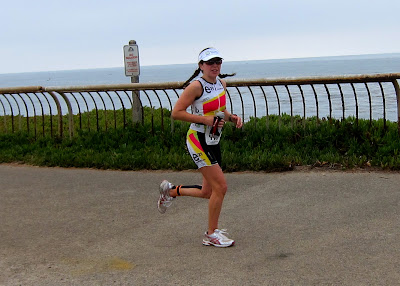 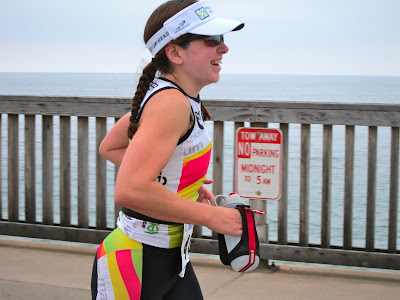 The run course follows a nice scenic path along the coast before turning onto the trails of a state park best known for its mountain biking.  Dirt and hills, oh yeah!  Unfortunately that didn't do great things for my legs when I was supposed to pick up the pace - I was lucky to hold on to the one I'd had for a while.  I realized once I reached the tiki turnaround that the run course was going to be a fair bit longer the 13.1 miles!  Shortly after emerging from the state park on the return trip, the sun came out, things got hotter, and my stomach announced it was done with this whole race thing.

The last couple miles were purely a mental battle to make it to the finish - I was officially FRIED.  I reminded myself often of one thing throughout race day and it was what kept me going at the end - YOU WANT THIS.  You didn't work this hard all year for the goals you set to let it go now, you WANTED to be here, in this moment, facing the point of breaking and make it to the finish line knowing you beat that pain and Kept. Moving. Forward.  You've dreamed of a day like this.

Sorry for the melodramatic interlude :)  Anyway, when you finally descend from West Cliff Drive to sea level, the course does the most unkind thing possible and leads you down the beach, where you get to run the last 1/3 mile (you know, that extra 1/3 mile that took it over 13.1 miles) on SAND.  I immediately ran to the waterline to get the firmest ground I could and then it was just time to focus on that finish arch (and not run into all the families playing on the beach). 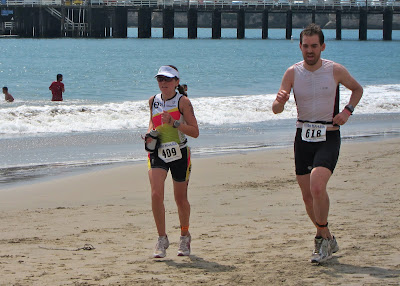 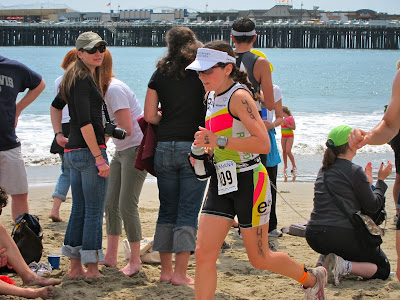 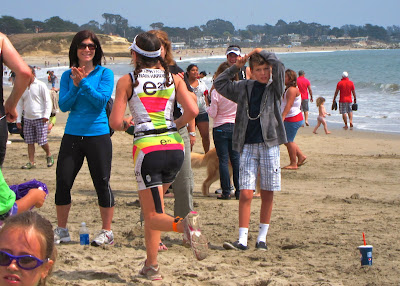 Total run ended up being 2:07:11 - nothing special in terms of what I've run in the past but it got the job done in the conditions I faced on the day and I kept moving no matter how bad it felt.

And then I was done.  And not smiling anymore because HOLY SHITBALLS my legs hurt!  I threw my finish medal and water bottle at Jeff and marched straight into the ocean to ice them. 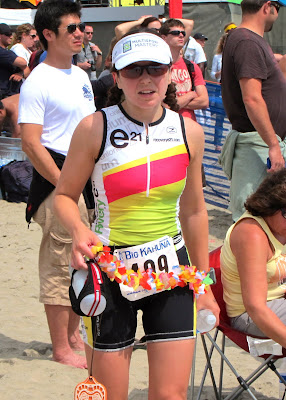 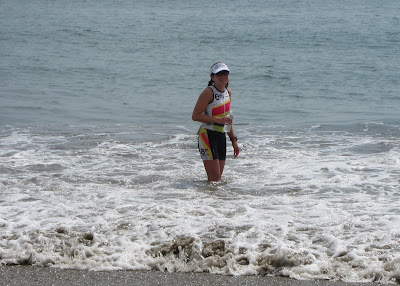 Best finish medal ever to approximate faces of finishers at the line? 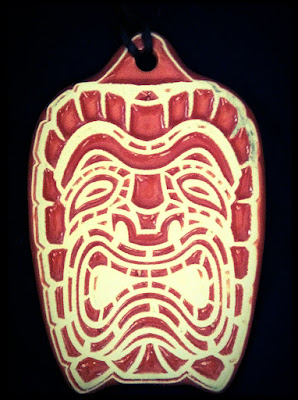 My training schedule for today said Eat something FUN.  Don't mind if I do.  I'm pretty sure I earned it! 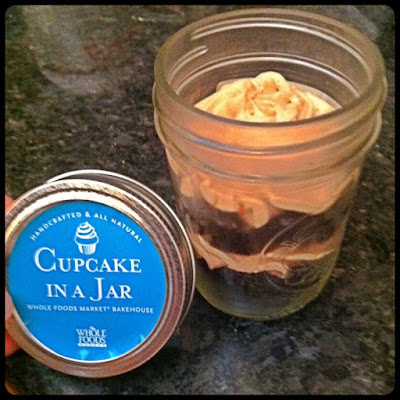 Thank you for inspiring me and make me laugh with every RR. A 14:15 PR??? That is freaking amazing! And I totally appreciate your melodramatic interlude because it's what you keep telling yourself and how you keep pushing your body that gets you a 14:15 PR, freaking amazing my friend!

Congrats! What a great race. I don't really get the cupcake in a jar though.

NICE PR!!! That's awesome, great job! Agree with Meredith... your melodramatic interlude was the highlight of your race report. Loved it.

Congrats Molly! You certainly have earned it.

And for the record the melodramatic interlude was the most inspiring to me because I'll be saying something similar when I return to the half iron distance in 2012.

Well done it's inspiring to watch your times keep coming down because you totally commit to doing the work that it takes to meet your goals.

You're a rock star! I'm glad someone else thought the run was a little extra long!

Fantastic RR. I love how honest you are about it sucking hard sometimes and fighting through it. Total inspiration!

Thank you for reminding me that I do want this. I will definitely be telling myself that on the 3rd bike loop and on almost the entire run come November. What a great reminder. Congratulations on such a great performance at Big K! And, thank you for making me smile today regarding the windmill comment. :)

awesome Molly! I just LOVE LOVE LOVE watching those that work so hard get the payoff. It's what it's all about. Congrats!! I can't wait to watch you at IMAZ.

I LOVE reading about your triathlon adventures - training and competing. Thank you for being an inspiration and for entertaining with your great writing. You sure look fantastic!

Congrats on the PR! Great accomplishment under those conditions.

That bay looks so cold and horrible, I think the swim alone is a big accomplishment.

Congrats on your PR! That is awesome. I love the cupcake in a jar. A very interesting snack indeed.

Awesome job Molly! Such a huge PR - definitely makes all the hard work worth it! :)

Great job Molly!!! I love the cupcake in a jar picture, I have been wanting to try one of those forever :)

suuwwweeeeet! So.... Is that a new PR setting up transition? 10 minutes? really?? for a half Ironman. I'm thinking you're a bit too organized.

and who painted the racing stripes on your leg? I WANT ONE!! :-)

Great job Molly! I like the FB comments. You're Grrrr-animal!1!


Now to the more serious question...think they will refill the jar if you return it? LOL

Wow! Great accomplishment, great pics! I love the finisher's medal too. It looked like a fun race and I'm sure the cupcake reward didn't hurt either. :)

Booking It with Runner Sami

Woohoo! Congrats on your PR..that is so awesome!! It sounds like you had some challenged out there, but you finished strong! Yay!!!

Way to go! Awesome job and love the positive attitude:)