You'd think that since I was training less and less the last week or two, I'd be posting more.  But alas, I bought a new laptop to replace my slowly-dying-an-ugly-death HP laptop and it's taken a while to get everything transferred and re-learn the basics of using a Mac.

I've had plenty of time to think about things and appreciate the small moments, like sunrise while running the dogs at the high school. 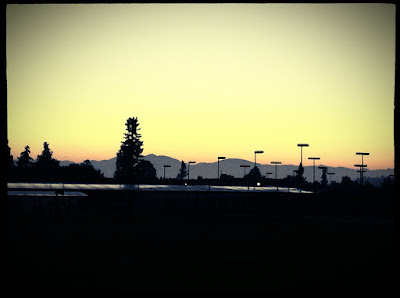 Workouts done on the coast over a holiday weekend end with a little beach time.

The bonus feature of a Northern California beach is, it doubles as an ice bath! 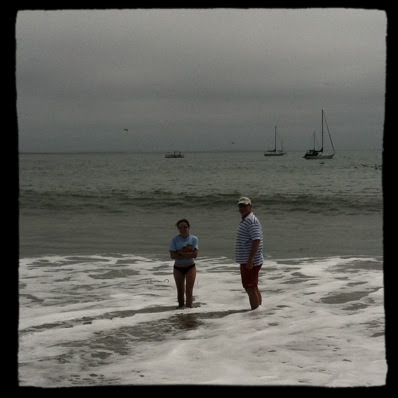 In any event, maybe taper or hormones or 10 hours of sleep a night makes me introspective but, in the course of driving ~250 miles today (drive dog to dog show, drive back, drive to packet pickup, drive back), I had a lot of time to think.  About the life I had 10 years ago and how much it has changed.  I originally wrote a lot of this out in detail but decided to pass on posting it...I suppose I should respect the privacy of the party in question.

The point is, triathlon for me has really been a way to define my life on my own terms, instead of how others chose to define it for me in the past.  I'm ever grateful for my husband, who from the day we got together has always encouraged me to do whatever makes me happy, without judgement, and not allowed me to fall into the easy trap of letting someone else make decisions for me.  I don't think there's been a crazy hare-brained Molly scheme yet that he hasn't supported 100%.  Including - seriously - "oh c'mon, take off your swim trunks and give them to that girl who's asking so she can win the contest."

In that past life, I was told plenty of things about what I "was" and "was not," and I "was not" an athlete (and yet I "was not" ever ladylike enough either).  I remember seeing something about this local race down in Santa Cruz and thinking how neat it sounded but I "was not" someone who could do that kind of thing.

So tomorrow, when I finally toe the line at Big Kahuna after 4 other 1/2IMs and 1 IM, I will remember the journey it's taken to reach this point and know that - PR, no PR, whatever - only I get to define what's a successful race.  Just making it to that point, I win - so let's go have some fun tomorrow!
Posted by Molly at 5:15 PM

Fantastic blog post! I'm in the middle of "trading up" right now too :) Only YOU can define you! Have fun tomorrow!!!

That is awesome. Take a moment tomorrow morning before you start racing and appreciate how far you've come! Kudos to you for being brave enough to define your own life. ;)

Doing it your way! I admire you so much. Have fun tomorrow because, no matter what, you have already won.

I admire your passion and desire for racing so much. Have fun tomorrow because, no matter what happens, you have already won. Hugs from all of us.

I'm glad that I didn't meet you before. You have been a tremendous inspiration and role model. I love seeing the ripples that you create in the lives of the people you touch. Wishing you speed and energy for tomorrow.

Love it! Love people who are their own.

what an awesome story molly. i have a feeling this finish might feel pretty similar to your first IM finish :-) You know, it's not about the distance itself, but the journey to get to each finish.

Love your post. I know exactly what you mean about having your life defined by someone else, and I am so happy you have found a true partner in J.

This is awesome Molly!! Thanks for giving us a little glimpse :D Congrats on your PR!! *hugs*