After 24 hours of what seemed like two long days of driving but really wasn’t (exacerbated by a teenager in his crate who voiced his objections loudly the entire route), we are in Boise!

I have road-tripped cross-country many times but this was the first time I’ve done a trip where most of the drive was in such isolated areas.  No gas stations for 100+ miles at a time, and almost no food from Winnemucca, NV until we reached the Boise area.

Headed from northern Nevada into Oregon 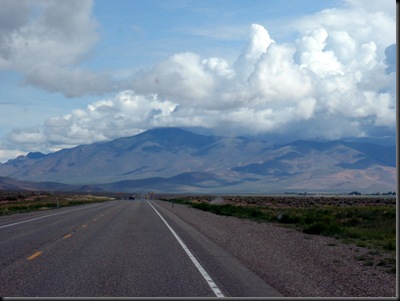 Interesting scenery near the Oregon-Idaho border 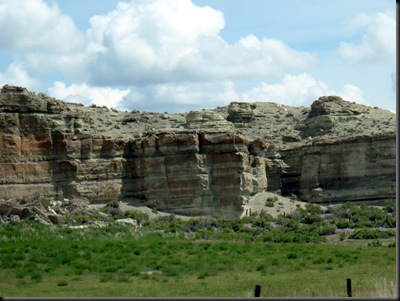 We rolled into town around 3pm local time and checked into our hotel.  We’re in a WONDERFUL location right near the race expo, finish line, run course, and right where the bikes go by into T2, so this will make spectating easy on Jeff.  The dogs are happy because our room has stairs they can run up and down.

After FINALLY getting some lunch with Jeff at a local brewpub, I headed to the Qwest Arena for the race expo.  I think the majority of people are arriving/checking in tomorrow so thankfully it was quiet.  I picked up my race packet, did a little shopping at the expo and then sat around waiting for the athlete’s meeting. 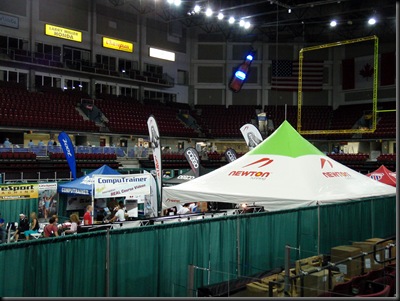 Positive things I learned in the athlete’s meeting:

Here is the aforementioned river, along which we will be running on the paved, shaded paths on both sides. 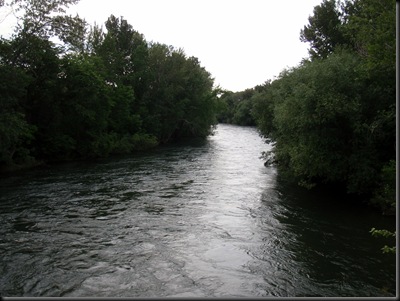 I have a fair amount of gear sorting and packing and logistics to work out tomorrow.  I have to put all the right things in all the right bags. 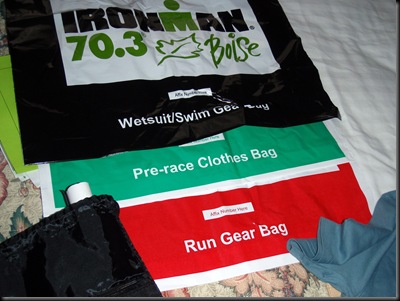 In terms of expo shopping, I got a bike jersey and visor at Vineman so I thought I should do the same for Boise.  I could not resist the plaid!  And then that pullover looked so cute I had to get it too. 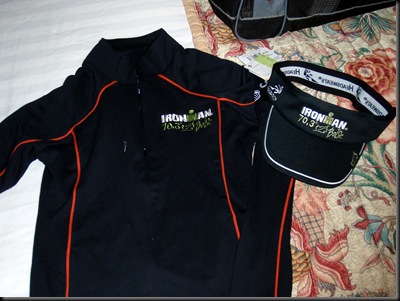 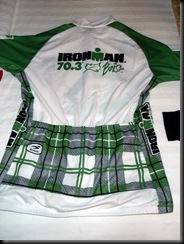 On that note, I need to get some sleep as tomorrow is a big day!  Sleep in a little (or at least past 5:30!), do a short brick out on course, check in my bike at the reservoir and drive the bike course.  Then it’s off my feet for the rest of the day and a big pasta dinner with Jeff’s friends.

Oh! I almost forgot. My race number is 1021 and you can track me live Saturday at Ironman.com!

That bike jersey is awesome! Good luck on Saturday. I was going to say you'd be done before I woke up, but with the 2PM start that won't be the case. I'll track ya.

Isn't there something magical about the 2pm start time? For me the best part would be not worrying about getting to sleep at a decent hour. Not asleep til 3? No worries!

I know you'll have a GREAT race! You are soooo ready! Go HARD then GO HAVE A BEER!!!

I lurve me some race swag.... Have a great race Molly! I will be checkin in on you from the home of IM FL!!

Wow! Boise has much cooler gear than Kansas. AND you get all those cool bags - I think we get Gatorade bags or some cheap thing to put our stuff in.

REGARDLESS - have a SUPER race Molly!

Love the jersey with the plaid! Can't wait to follow you along tomorrow--YOU WILL ROCK! That run course looks very nice.

I heart race shwag! Love that jersey :-) I've kinda wanted to do that race really bad...but I am very interested to hear about the 2pm start. I'm such a morning exerciser..... Wonder if they will keep it that way?

You are going to do so well Saturday! You've done the work, now just ENJOY!

Cute buys! Good luck out there!!!

I'll be cheering for you for sure! I can't wait to hear all about it. Kill it out there, Molly!

Again...GOOD LUCK! You are going to be awesome!

Love the race gear! We'll be back from a 4 year old's birthday party in time to track you. Knock 'em dead!

LOVE the stuff you bought! Reading this post tripped memory lane for me as I grew up in northern Nevada, on the Duck Vally Indian Reservation (town called Owyhee), just 150 miles or so south of Boise. My college roommate at UNLV was from Winnemucca.

And you are so right there is NOTHING up there for miles. Truly for miles.

You are ready for this race. Cannot wait to cheer you on from Utah!

Love all the gear! The race shirt is nice, and I love the stuff you picked up too. I really hope that they have equally nice things to purchase at Lake Stevens cuz I'd like to do some shopping.

Have a great race tomorrow Molly!!!! Cannot wait to hear all about it.