Another One Bites The Dust

These training weeks just seem to fly by, blend together, one into the next until suddenly before you know it, race day will be upon you.

After a couple days of swim and rest, I was back to training hard Saturday morning with a 2-hour run in Z1-2. I can tell the ART is working because I had no pain at all and my calf/shin only started feeling tight somewhere after the 8th mile. This was probably the best run I’ve had since Boise! I was feeling great when I finished up the run and I ice-bathed and ate as soon as I got home.

Unfortunately my stomach decided to turn into a delicate princess for the rest of the day – I was popping Pepto and other assorted wonders of the pharmacopeia to just feel human.

I went for an OW swim at Shadow Cliffs with my father and my sisters in the afternoon – it would be their last chance to practice before the Catfish 1.2 mile OW swim race in a few weeks and I wanted to get out there with them. Surprisingly, swimming was the only time I didn’t feel like utter crap post-run on Saturday. After that I went home, ate bland foods like chicken noodle soup and saltines, popped 2 Advil PM and went to bed at 8pm.

Today I woke up feeling fantastic! Good thing since I had a long ride on the agenda (in Coach’s words, “This will be rough after the long run yesterday - but just get through it because next week is rest.”). I was on the road with Nigel and Andrew by 7am and Jeff joined us for the middle 25 miles. I was too windblown to take pictures but I gave the camera to Jeff and he got some. 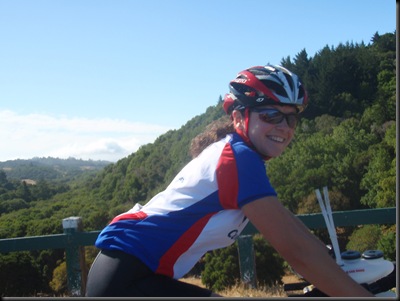 Nigel, Andrew and I on the Sawyer Camp trail, the cutover from Crystal Springs Reservoir to Skyline Blvd in Millbrae 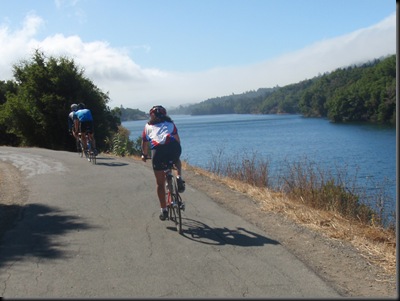 Photo op at Lower Crystal Springs, heading back towards Highway 92 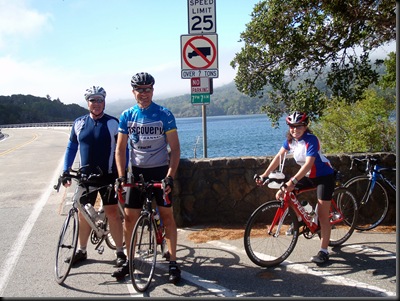 Coming up a steep hill on Skyline 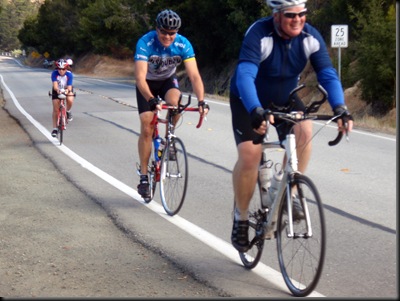 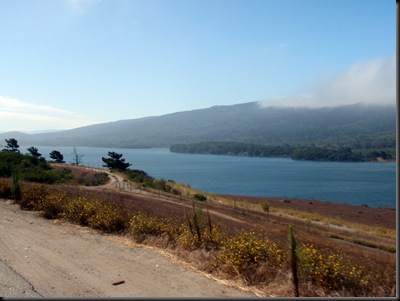 Today was one of those days that made me love riding. It was cold, it was hot, it was REALLY hilly, it had headwind, it had crosswind (which still terrifies me), it had more headwind (it never seemed to have tailwind – the problem with riding early is the wind shifts after the fog burns off). But it was a beautiful day and a good hard ride!

I was SO excited to ride this route. While the first half was a regular route for us, the second half was new territory to check out. I finally found a safe way from the South Bay to San Francisco! From where we turned around, it’s a mostly downhill glide on Skyline Blvd into the west side of the City! We rode as far north as SFO today, into San Bruno. I guess you have to live here to appreciate how far that feels like we went! 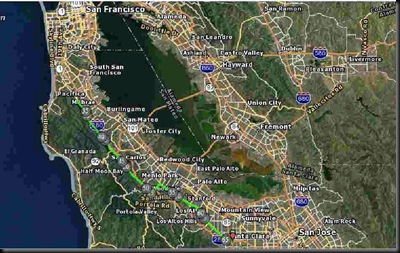 Most random moment of the day: we’re riding down Canada Rd (closed to traffic on Sundays so that cyclists can ride safely) and I spot someone riding the other way wearing the same bike jersey I am (bear in mind, only a handful exist – it’s for my dad’s company and I’m the only non-employee who has one). I yell, “HEY I’m wearing that shirt!” He glances at me and keeps on riding, and I figure I’ll ask my father on Monday who from his office was riding up there on Sunday. A few miles later we are back at Jeff’s car refilling the water bottles and he rides up…it’s my brother (who also works for the company)! He was out working his Team in Training group and probably hadn’t heard me in the wind the first time I saw him. Anyway…

Next is REST WEEK (followed immediately by the beginning of my IM build)!!

YAY for rest weeks! Have a great week of rest and R&R! ;) Good job on your training, LMM! It will all pay off!

Great pics! To funny that our stomachs went to crap on the same day :) I will be sending you SUPER stomach vibes (along with lots of GIANT cowbell ringing) come November!

Great job pulling through all the training! I cannot believe you are beginning your IM build!! It's fun to follow your progression as an athlete this year... you are getting stronger!

Gorgeous pictures!!!! I want to come to CA and ride with YOU!! :o) Warning... I'm a big 'ole bird watcher, so you might have to strap a tow line to me.

Oh, the tummy... that sucks big time. Can you figure our any rhyme or reason for it? Maybe it was just one of those flukey things that happens.

I know what you mean about training weeks flying by!

So glad to hear your calf is better. And I'm envious of those scenic views on your ride. Central FL is soooo boring ...

Hey if I hitch hike out to Cali, can I ride with you guys? the rides here in Iowa are...as you can guess...boring.