While it feels to me like my weekend was a bust, there are in fact positive things to report…

On How To NOT Get Some Zzzzzzzs…

We kicked the weekend off with Jeff’s playoff hockey game on Friday night.  10pm start but the ice rink was backed up and it didn’t begin until 10:30.  Who knows why – I guess because it was the championship game – but I stayed up and went to watch, even though I had to be up at 5am.  Sadly, several of their key players were missing and they lost the game.  That did not, however, stop me from yelling and making cracks about the other team all game…when you’re the only spectator for your team, you’ve got to have a little fun with it.  And when someone thinks it’s cool to bring their 3-year-old out to watch at that hour (and proceed to let him beat on the bleachers with a hockey stick), lacing your cheers with some colorful language is a good way to get rid of him.  Just in case you were wondering…

I came right home and went to sleep, but Jeff didn’t make it to bed until about 3am (post-game beers, decompression – ie waiting around for the body to stop sweating, shower, etc).  Ugh, I couldn’t fall asleep again after that.

Anyway…up at 5am Saturday to walk the dogs, load them in the car, and head to the pool to steal a lane at masters for my drill swim.  Hop out of the pool, shower, and race to the USDAA trial in Prunedale.  Instead of the usual coastal fog and breeze we get down there when it’s hot inland, it was nearly 100 degrees and muggy with no wind whatsoever BY 10AM.  Even in the shade of the tent, the dogs and I were sweltering.  Give me a swim or a bike or a run in that weather and I’ll gladly do it.  But make me sit there for 5 HOURS (the trial ran slow) before we even get to do our first agility run of the day, and I suffer miserably.

I was very proud of Max for hard work on tough courses in the heat.  I knew going in that these were not courses favorable to his style of agility but he did quite well on them.  Sadly we were not fast enough to qualify in Performance Speed Jumping (where you only qualify relative to the time of the fastest 3 dogs in your class).

On one bright note, after waiting around all day Stanley finally got to do his one agility run (in only his 3rd or 4th time in the agility ring) and FINISHED HIS FIRST AGILITY TITLE!  He had a lovely Jumpers run with no faults and boy is my baby dog fast!

Not All Tests are Pass/Fail

Up early again this morning, for my first bike test in ~8 weeks.  Honestly I was just not feeling well-rested for this, and combine the heat/humidity and smoke from a fire down in Hollister yesterday…I was not feeling 100% going into this.  Still, I figured I am constantly learning how to push myself harder on the bike and I will push till I puke if need be.

The ride was hard as hell, all out for 20 minutes.  People on the sidewalks looked at me funny as I went by gasping and panting and peddling away.  I rushed in the house to look at the data after the ride and felt…disappointed.  Just a handful of measly watts higher than before?  After all that work I’ve been doing?  What a bust. I suck.  My run off the bike sucked as I couldn’t breathe and my leg hurt and I finally packed it in and stopped early.

Thankfully Coach set me straight with a reminder that every little watt improvement counts, AND I set a few new bests for critical power along the way, AND I improved my power-to-weight ratio.

OK, so maybe it wasn’t total suckage.  I want to kick some ass on the next bike test though.

Sometimes The Doing is Enough

After the bike test, I grabbed Max and raced back to the trial, for one more run.  I made a point of reminding myself in advance, we do this FOR FUN.  The partnership I’ve built with the big dog is a huge accomplishment in itself and I should never forget that.  All the things we’ve been through together…it makes us who we are.  Max had a beautiful Performance National Standard run, nailing all the hard parts at top speed.  There was a call by the judge that I didn’t agree with (Max and a teeter flyoff? Have you ever seen how slow he does teeters?) but it’s unimportant.  Having a good time out there with my best buddy is what mattered. 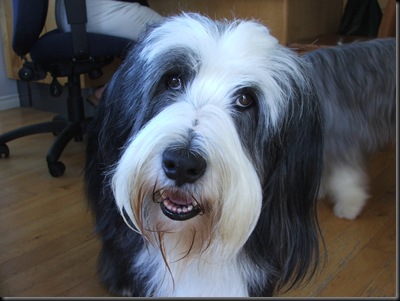 I’m making a point to wrap up rest week by de-stressing tonight, doing some reading and resting up for the week ahead.  Because the Ironman build is finally here – the first of many big weeks begins tomorrow!

congrats to the dogs for their awesome-ness. sorry about the bummer ride, this just gives you more incentive to kick ass next time!

I see no bust. I see you out there trying and gaining a bit. Stanley got a title and Max was hot on the last too hot day. I'm patting the three of you on the back.

You know what? The BEST thing you wrote: Sometimes the Doing is Enough.

Testing and stuff is hard work - we know how hard we have to push to get the desired results...and its not always a purely physical thing. Just putting yourself out there - you are bettering yourself for next time as well. Always remember that - it is so important. You still learn so much in the process....

Perfect quote for me today as well - THANKS!

Molly, you and your dogs are amazing! I love what you said about 'partnership'. That IS the most important element... for sure! Hugs to all of your furries for a job well done!

Good luck with the Ironman build. I'm following your every word!!!

Congrats to the baby dog on his shiny new title. He looks fabulous.

I hate sitting around all day in the heat waiting for runs as well, drives me crazy.

Isn't it great to have a coach to save us from ourselves?

Although I have not been training with power, I have sometimes been frustrated with what I viewed to be lack of progress or not enough progress at times. And I definitely agree that just sitting around in heat is WAY worse than training in it!

Beautiful run, Stanley! What a star!