A Big Day for the Family Project 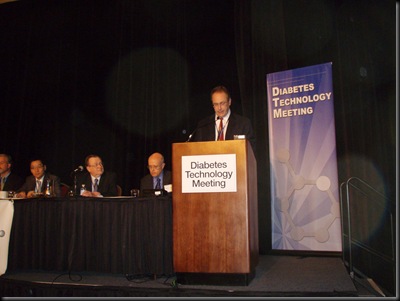 
I met Jan Lipson in 1968, when we both joined the freshman class at Caltech. I was quickly awed by Jan’s knowledge and intelligence, and by the intensity he invested in every moment. Even his relaxation was intense.


Bob McNamara arrived at Caltech in 1970, and the three of us formed a close bond. We were roommates over the summer of 1971, when we met our three wives, who were nursing classmates at USC Medical School. Jan and Janyce, Mac and Evelyn, and Michelle and I have been part of each others' lives ever since.

Jan’s second son lives with Type 1 Diabetes Mellitus and suffers the effects and uncertainty that accompany that condition. This is why Jan decided to devote his later career to finding a way to free his son and so many others from blood draws and nocturnal hypoglycemia and all the other tyrannies of this medical condition. He conceived our company’s technology and was the technical visionary who sparked the effort that has brought us so far, upon which Jan reported in these meetings in previous years.

Jan once said, "You know, Paul, if I hadn't been an optical physicist, and my son hadn't had diabetes, and you hadn’t had your unusual life circumstances as well, we wouldn't have this company." "Jan," I said, "there's a fair wind blowing. Who knows why? Let's just stay on
course." And a steady stream of rather amazing coincidences has continued to propel us forward since the beginning.


Now we know that Jan was not destined to reach port with us. But we shall continue the voyage that he envisioned, undertook and helped so much to further.


Janyce Lipson was unable to be here today, but she asked me to extend her congratulations on the occasion of the Tenth Annual Diabetes Technology Meeting, her sincere thanks to Jan’s friends for the many condolences that she’s received, and to David Klonoff, Yoram Tamir and the entire Diabetes Technology Society for their friendship for Jan over the years.

One more coincidence related to C8 marked the very end of Jan’s life. Jan was an avid and accomplished bicyclist. He loved every moment that he spent riding. It is tragic that his life ended during one of his frequent 75-mile rides just about 4 months ago, when he lost control of his bike and ran into a tree at high speed. Among the population of California’s teeming Silicon Valley are just a few dozen people who have been C8’s clinical trial test subjects. Just after Jan’s accident, as he lay by the roadside, near death, a group of scooter riders came to his aid. One of them just happened to be one of our very own test subjects. The C8 team immediately took this
as a sign that we were to rededicate ourselves to realizing Jan’s dream of creating the ideal glucose monitor.


In that same spirit, at our request, the Diabetes Technology Society has established a memorial fund in Jan’s name, and C8 itself has held the First Annual Jan Lipson Memorial Ride for Diabetes, benefiting the society as well. Now, it’s with a sense of great humility and hope that, on behalf of C8 MediSensors, Mac and I present these donations from our company’s many friends.