It was a whirlwind weekend in Arizona!  I flew in Friday with Jenn and David, and flew home Monday afternoon.

We met up with Alex and Susan for dinner on Friday night – so good to catch up with them in person without the weight of a race bearing down on us. 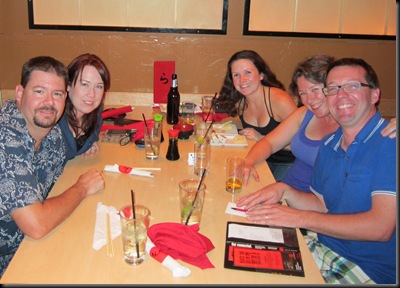 Saturday was consumed with the volunteer meeting, shopping at the expo, and trying to prepare ourselves for a big day of spectating and volunteering.

Sunday dawned early and early, with a 4:30am wakeup call.  We had to drop David at the Temple Town Lake marina for his swim spotting gig at 5:30 and I had to be over to transition by 6ish. 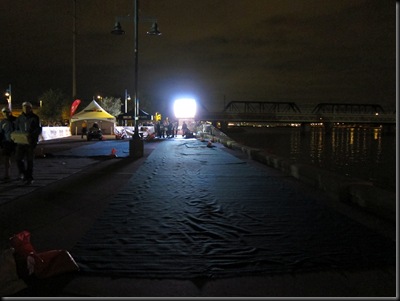 Pros get in the water 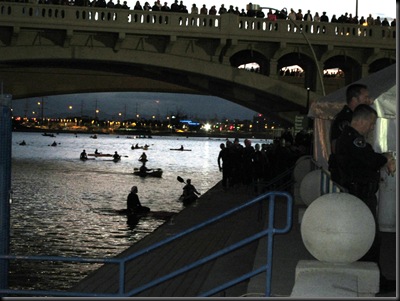 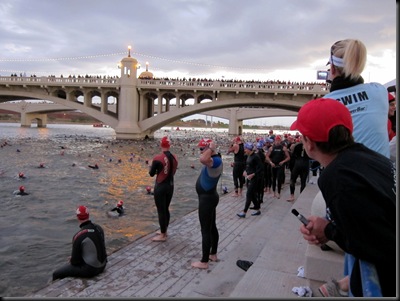 and after a little more waiting…they are off! 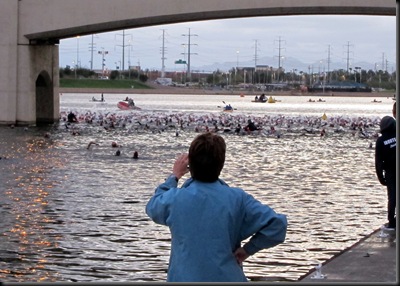 We had some time to kill working at the swim exit 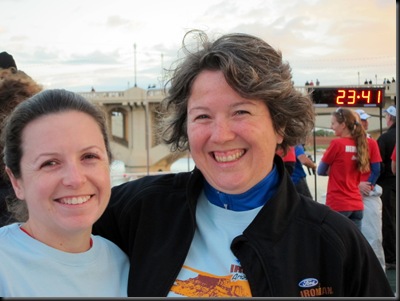 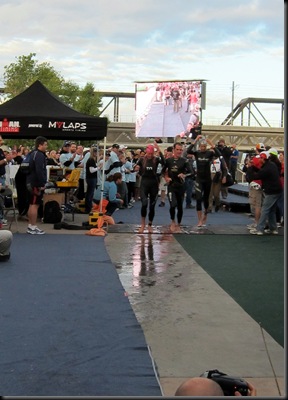 Pretty much our job as wetsuit peelers involved waiting for athletes to come down the mat and then mauling them to get their wetsuits off at high speed. 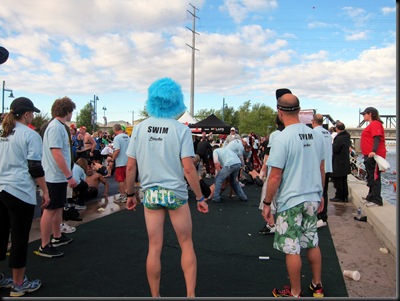 After the last swimmers were done, we got to relax and get a snack! 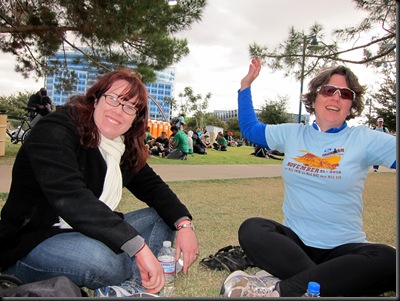 Then it was time to hang on the bike course.  Chrissie was already in the lead by this point! 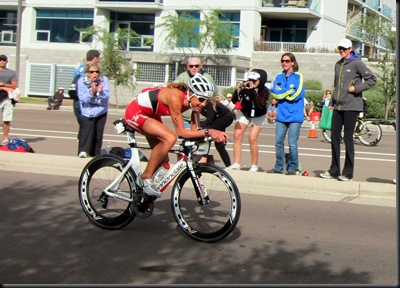 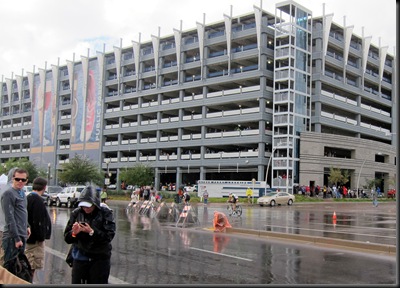 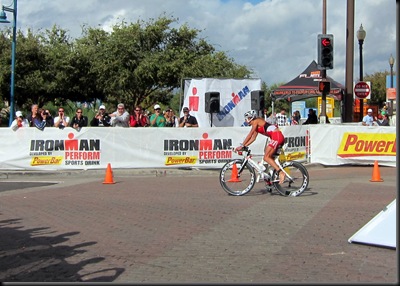 We went out for beers at that point and made it back in time to see her head out for her final loop on the run. 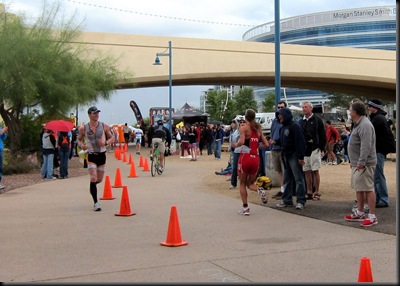 The men’s winner Timo Bracht had a great race! 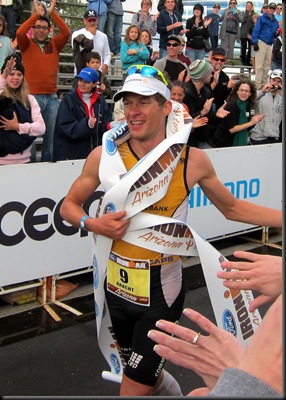 The first 7 men came in and then…with a new world record (for women in official Ironman events) and chicking the majority of the men’s pro field…there was Chrissie! 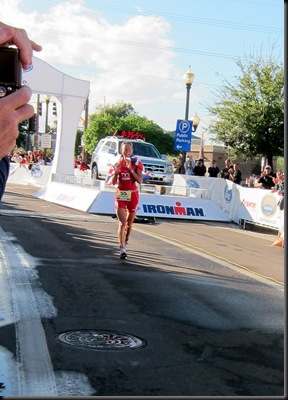 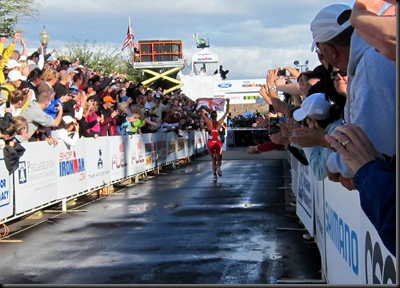 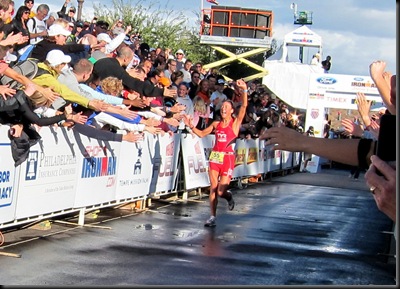 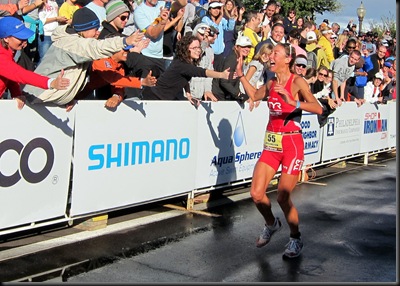 And then we cheered in a lot of other athletes.  And went home to rest for a while.  And then I was back in the stands at 7pm to cheer in a few more hours of friends.

Great shirt spotted on the course 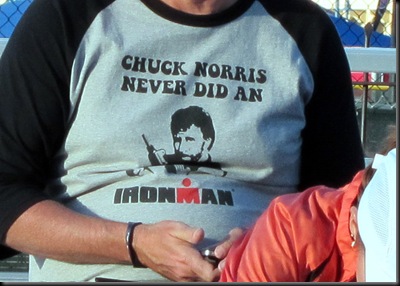 THIS moment is why we do it. 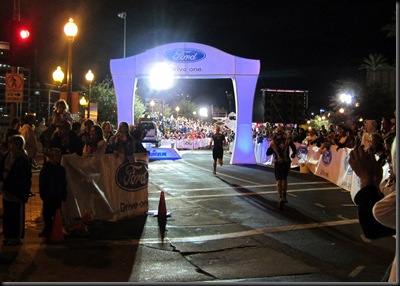 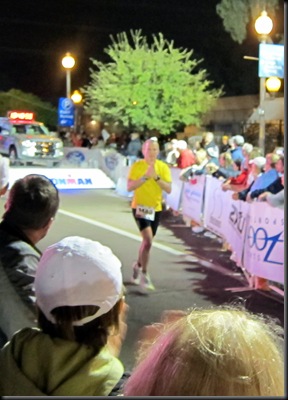 This is what it looks like to be 12th in the IMAZ volunteer signup line at 5am.

This is what the line looks like by 6am. 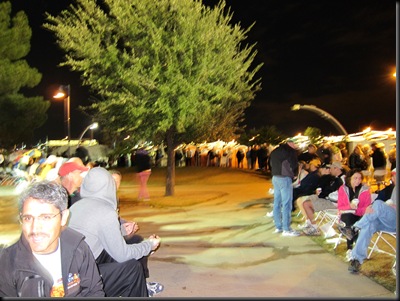 On-site registration is a really easy process – they just take your name, birthdate, email address, and charge your credit card.  You complete the online registration later. 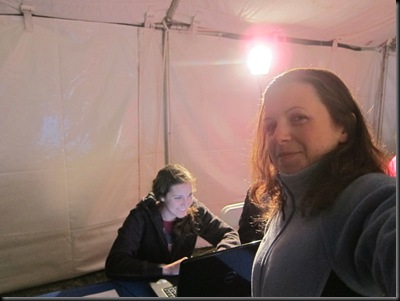 As posted earlier, this is what it looks like to be $575 poorer! 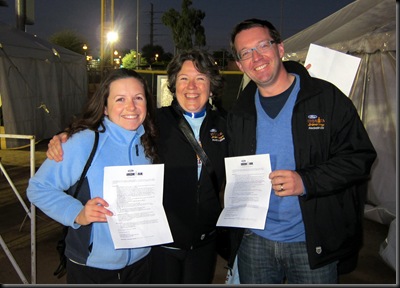 Good thing I have a whole year to train.  I don’t have to stress too hard about what is coming just yet!

So you spent your weekending tearing the clothes off total strangers? Or being a stripper, you could say.

That's Ron's shirt! I'm going to have to send him the link to your blog so he can see that he's featured :)

Um, that’s me (and my belly) in the Chuck Norris shirt. I would like to point out that I was sitting down at the time and did not know I was being photographed. Had I known, I would have sucked in the gut.

Based on your photos, we were watching the race unfold at the same locations. I was so inspired that I registered for next year’s event too. It was not until after I clicked the “take my money” button that I realized I’m entered in IMCA AND NYCM too. Looks like a fun fall in 2011.

Very nice. It was a fun weekend. You got some fabulous pictures of Chrissie, good job!

AWESOME AWESOME! I loved getting to see you, and I'm so excited for your big year next year! Have a great Thanksgiving and off season!!

When Chuck Norris competes in a triathlon he runs the whole way, even on the water.

Chuck Norris can't compete in triathlons because he only knows one sport: Kicking ass.

Chuck Norris doesn't need to be aero because the air is afraid to get in his way.

Chuck Norris can volunteer at a triathlon and still win it.

Excited to follow you next year as well -- very very cool.

That Chuck Norris shirt is awesome. And I can't believe you were 12th in line! It's going to be a great year!

What a great report, love the pictures!