I think I could enjoy pro-stalking as my new hobby.  I kicked off this new activity today, as my aunt and I went to a talk sponsored by the Silicon Valley Leadership Group at Sunpower Corporation.  It was also a taped radio broadcast that will be archived here over the weekend, in case anyone is interested in listening to it.  The speaker was…the current Ironman world champion Chris McCormack! 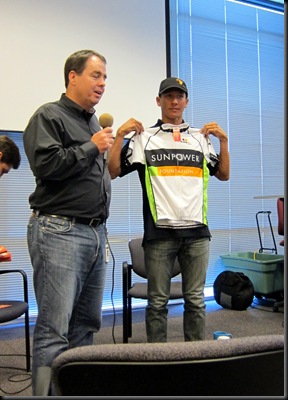 What is there to say about Macca that hasn’t already been said? He’s hilarious in person.  And interesting and smart and touching (he teared up talking about losing his mother to breast cancer and his Macca Now foundation, which raises money for this cause).  Those who have followed his career may feel he’s had a chip on his shoulder at times (and who wouldn’t, having to deal with those German pretty-boys), but he seemed much more relaxed and at peace after his victory at Kona 4 weeks ago.  His wife is pregnant again and he’s not sure if he’ll do Kona in 2011.  He implied he’s eyeing the 70.3 World Championships, which he scouted with his win at Silverman last week.

Simple put, he is awesome.  And yes, I touched him.  Coach says I just gained 20 watts. 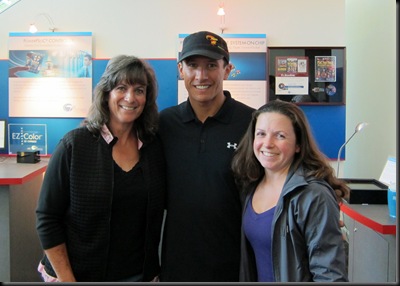 You may think I’m blushing (it’s possible) but I promptly went home and was diagnosed with a gum infection an hour later.  So I’ve got that going for me…

This was just a warmup for the kind of stalking I plan to do of Chrissie Wellington at IM AZ next week.  Bring it on!

Chrissie ran past me on my long run last Saturday, I practically felt a gust of wind as she went by and I watched her quickly disappear in front of me. It made me all giddy.

Have fun in AZ!! Man, do you ever stay put? You are always up to something fun :-)

Sweet. I heard he might not do Kona next year. But he loves that Silverman course, the year I did the 1/2 I lined up right next to him on the swim and he was so funny to start next to, so it makes sense he might go after the 70.3 win next year.

Not surprised he implied he was eyeing 70.3 worlds. He's come to Silverman nearly every year since 2007 (he may have missed last year not entirely sure).

will i see you at IMAZ?

LMAO... I'm sure those watts are totally offset by the extra poundage ;-)

You like Macca, but not ML? You confuse me.