On Tuesday morning, the first of the new year, I rolled out of bed for the Los Gatos Resolution Run.  It's a 5 mile race on the very far end of the path I regularly do my runs on - the hilly end.  There's one hill on the course that is short but so very steep - I always end up walking part of it to get my heart rate back down.  I don't do new years resolutions - it's not my thing and it doesn't seem necessary when you are planning out race years and performance targets already.  But I do set little goals along the way to challenge myself.  And goal #1 for the new year was to run up that damn hill.  (Goal #2 was to not shit myself in the race. You women out there know that some days/weeks in the cycle...it's a consideration.)

We set off from Los Gatos High School up the gravel/dirt trail to the top of Lexington Dam and back. 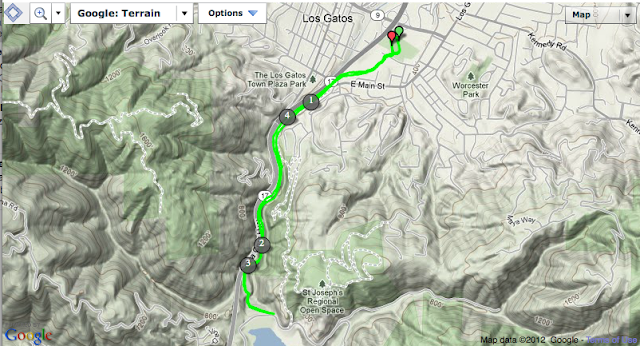 That hill right there around the 2 mile mark...that's the one.  It's short but it's a steep motherfucker.  (The climb to the dam itself, which peaks out in the middle, is no cup of tea either).

In the end, it felt like I was dying and my heart rate topped out at 199 but I ran up the damn hill and then up the damn dam too :)  Thank goodness it was downhill on the return trip though that still hurt at the pace I was pushing.  Mission accomplished.

It felt like I was pretty far back in the pack.  All the "serious" runners show up for the hill challenge.  (Side note: OMG runners can be real dorks.  I'm sure I don't need to elaborate.)  Anyway, I thought there were a number of women in front of me but I guess most of them were high school track girls or older women, because I ended up placing fairly high and taking 2nd in the 30-39 women!  (This is another bonus of racing during that age range where most of my cohorts are off having babies instead) 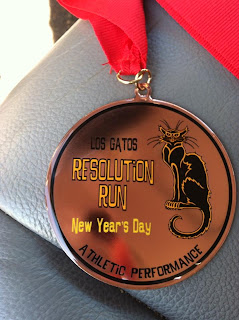 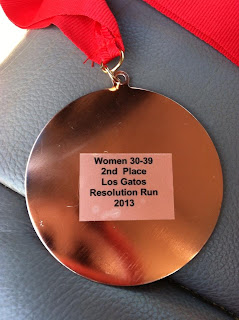 An advantage of a race put on by a running store is seriously awesome awards!  I got a bag with all of this - shirt, socks, water bottle and a bunch of nutrition samples. 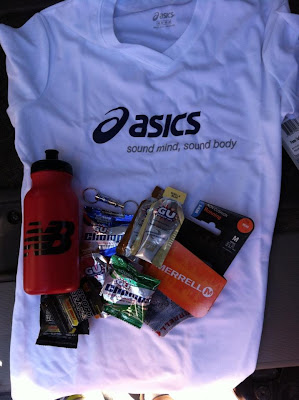 Congrats! Always a pleasant surprise to go home with some hardware. And clean shorts.

congrats on a great race! and love the new header photo