Back on the wagon

This week was a return to training, getting my body back on track and gearing up for the next race build.  It also turned out to be a lot of work to get re-acclimated to the heat after 2 weeks in cool temps in Idaho.

Of all 3 sports, surprisingly, swimming went the best this week.  In addition to my drill swim with Jenn on Wednesday, I finally worked up the nerve and did the 1-mile OW swim around the Santa Cruz Wharf on Friday night, poor sighting and territorial sea lions and all.

And it was AWESOME!!!!  I am so grateful for Chris and Melissa, who led the way for me to follow.  Compared to Boise, the ocean chop didn’t feel bad at all, and at 57 degrees it was the warmest the water has ever been for me ocean swimming.  I went through the swim significantly faster than I expected and figure it’s a 1-mile swim PR by 5+ minutes.

Saturday’s “easy” run turned into a bit of a death march due to another surge in the mercury.  After 2 miles in the 100+ heat I wound up walking quite a while and was eventually rescued by Jeff (who did the whole run easily) looking for me with the car and a bottle of water.

Today I wrapped up the week with a lovely bike ride on the SJIT course – flat to rolling with only one climb on Bailey out of the valley and into the foothills.  By the time we hit the switchbacks up the hill it was about 90 degrees but I felt great due to well-planned hydration and salt tablet intake.

Nearing the top of the climb 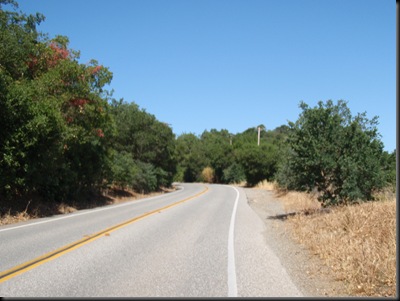 I was trying to get the mountains on the other side of the valley but it was too bright out. 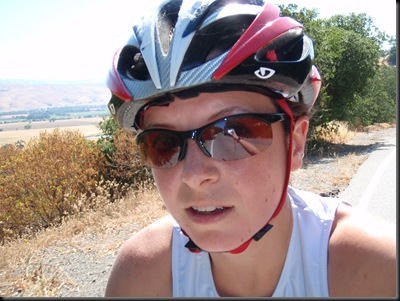 My only disappointment for this week – besides the crappy run in the heat Saturday – was a missed weekend drill swim.  My masters pool suffered catastrophic pump failure that led to dangerous chlorine levels (I hear so high, it ate the pump up), the community center has virtually no weekend lap swim, and my backup pool was holding a swim meet both days.  Weekend lap swim hours being more limited, I basically ran out of places to swim (unless I wanted to try to do 2,000 yards of swimming in a pool with no lane lines, while 40 children dove in and out and beat each other with pool noodles – no thank you).

Catching up on training/racing totals from the last few weeks…

Next up is my first big training week in a while…lots and lots and LOTS of biking.  We’re going to whip these legs into shape!

Welcome back to training! Great job on the workouts. Too bad about not being able to get the swim drills in! Wow...how bad was the chlorine in the pool if it ate the pump up??

Tis the season for swim meets! Our schedule is all jacked up too.

To beat the heat, do you ever ride early a.m. or late p.m. - headlights etc.? It is something we do to help BUT you need a really safe place, like minded friends to join you and killer good headlights. The heat is blistering already!

57d degrees is like swimming in a freakin ICE BATH!! Brrrrrrrr :-) But hey, if you swim faster, you stay warm!

Seems like heat leads to crappy lotsa things!! No worries though, your running is very strong!!

Keep up the good work!

Wow, sounds like a lot of hot weather there in Cali!

Great job on the OWS. Isn't it funny how perspectives change after enduring even harder conditions?

Hope your pool is back to normal soon!!

Funny, that pier was my first half-iron and also my first OW swim in an ocean. And the ENTIRE time I was thinking the same thing about the Sea Lions. Just waiting for me to become bait.