When I saw my schedule in Training Peaks for this week, the first thing I noticed (besides tomorrow’s Very Big Brick) was a 90 minute open water swim.

Chris has been joking for months now that she and Melissa would be doing double loops around the pier with me when IM training began.  When I saw this swim I knew there were two choices – 90 minutes of laps back and forth in the lane at Quarry Lakes, or 2 loops of the Santa Cruz Wharf (based on my average time for 1 loop).

I’ve only swum around the Wharf a few times but I figured what the hell – the cold, the current, the waves – it’ll all just make 2.4 miles of swimming anywhere else seem easier.

I put the bat signal out to my swim posse (i.e. posted on Facebook, “Who wants to do a double-Wharf swim on Saturday the 5th? Come on, people, it will be fun!”) and they all responded in fine form.

I checked the water temperature online this morning and it was a balmy 55 degrees – the better to appreciate every other OW experience!  Six of us met up to do the swim and quickly suited up to get in and over the cold already. 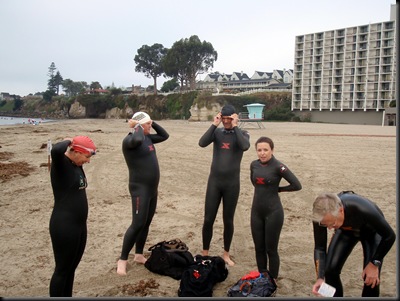 My father was doing his first time ever around the Wharf!  I think everyone had a good laugh when something large brushed my legs and I yelled “One of them touched me! One of the sea lions touched me!” and sprinted 25 yards in a hurry, and then everyone said, “No, that’s just your dad.” 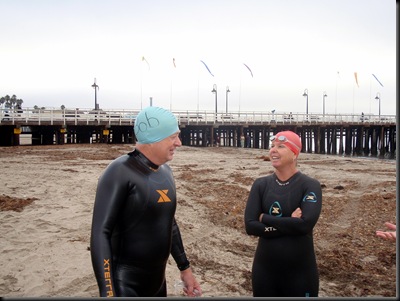 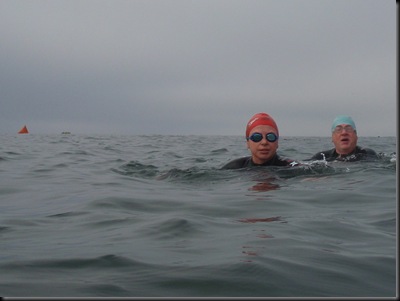 Melissa had a blast taking pictures and looked so cute! 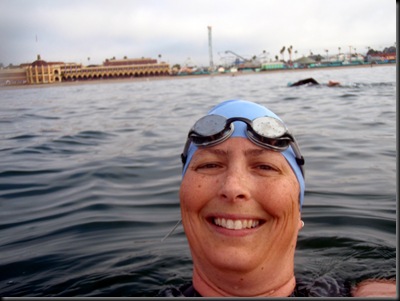 The amusement park makes for a fun backdrop – on the east side of the Wharf, we sight off the tower ride to swim into shore. 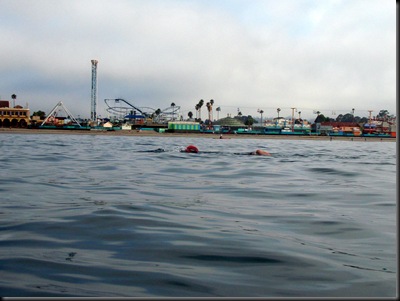 Swimming faster, it was getting lonely out there! 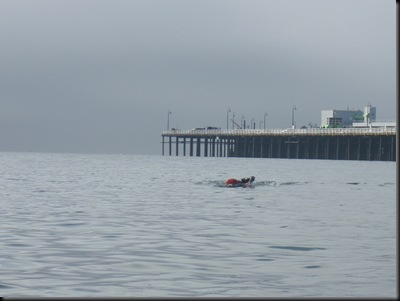 At the end of one loop, we sent my dad onto the beach to warm up and change.  One loop is MORE than enough for your first time out there.

I asked Chris, “Should we just swim to the orange buoy and back (on the west side of the Wharf) for the 2nd loop since it is calmer on that side?”  She said, “No, you’re doing 2 full loops.”  And so the rest of us headed back out and around the Wharf for another lap!  I love when she kicks my ass.  It’s her fault I even do this sport at all.

I was feeling colder than usual this swim and it was a little unnerving at points to realize I was shaking (I just kicked harder when I noticed my legs shaking).  While the official reading had been 55 degrees, there were some substantially colder patches of water offshore!

2.05 miles done and I even negative-splitted the miles!  I have the best swim buddies ever to get up early on a holiday weekend and let me chase them around in cold water.  I am going to owe Melissa and Chris BIG-TIME when Ironman is over :) 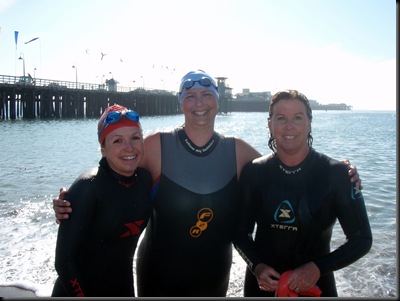 I put my new Garmin 310XT in my swim cap and it was great – it beeped and vibrated every mile and I got this nifty picture of our route! 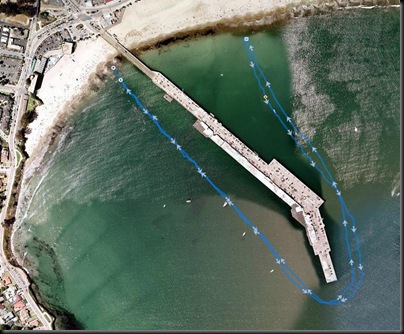 Now to rest up for tomorrow’s adventure!

Great Molly! Really great! Nice to have this in "the bank."

Your new Garmin is AWESOME! And look at you go, girl! I see you are doing well. :) So glad to hear it.

I totally love Garmin. I might have to try that swim-cap trick with the 310XT, although I don't want my bubble burst when I see that I have been swimming a way shorter distance than I thought ;)

Do you swim with BlueSeventy socks? They make a HUGE difference for me in cold water!

Ok, LOVE the new Garmin. And, may I just say how impressed I am that you swim in that straight of a line!?!

AWESOME.
JEALOUS!!!!!!
You are becoming quite the swimmer!

Um...I just have to mention that I noticed your friend in the picture there swam in 55 degree water IN A SHORT SLEEVE WETSUIT! BRRRRR!!! I'm getting a little chilled thinking of it! ;)

Anyway, GREAT JOB! The calm waters of Tempe Town Lake are going to feel like a breeze after this!

Congrats, great confidence builder. How's that new Garmin?! I was wondering how it would work in the water and stuff. That rocks, love the map.

GREAT job Molly! That's awesome - you are so brave! The swim in Tempe Town River will be EASY compared to this! :) HOORAY for great training partners AND congrats to your Dad! Woo hoo!

Great session Molly. I am still to test my new garmin whilst swimming.

Love the map... do people fish from that pier?