You Win Some, You Lose Some

After rolling out of bed early (Chris had to feed the farm animals),

I just re-read this after posting and realized it sounded like Chris and I rolled out of bed together. So a rewording:

After Chris and I rolled out of bed in our separate homes early in the morning (Chris because she had to feed the farm animals),

we arrived at the swim race venue this morning by 8am. Overnight, we’d been – shockingly for around here – hit by a little thunderstorm and it was still drizzling at Shadow Cliffs park. We waited around patiently in the rain. I was excited to finally swim 2.4 miles and get a sense of what my time would be like, but even more excited to cheer my sisters through their first open water swim (the 1.2 miler). 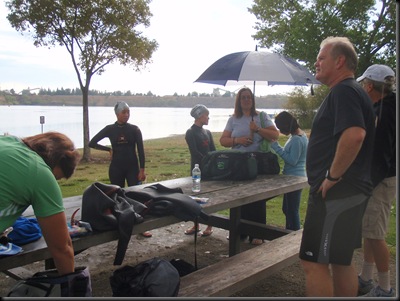 And then, just a few minutes before they were about to start the first race, a loud crack of lightning struck nearby followed immediately by thunder, and the race went into delay mode. We waited, and waiting, and waited some more. Finally, well over an hour after the expected start time, the safety folks and race director made the call to cancel the race for the day. It was a good choice given conditions at the time, but a bummer for me as well.

Nigel and I were sad we didn’t get to do our swim (Chris was too, but she couldn’t seem to open her eyes for any of the sad pics) 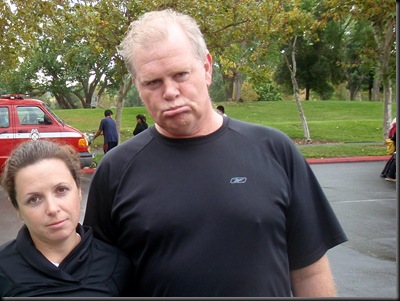 Like many others at the race, we were building the swim race into a brick for the day and heading out on the bike. I think Jeff's favorite part of the day was when he showed up to ride and some skinny little triathlete chick looked him over and said, "Oooh! Socks with sandals. That's sex-ay!"

Chris and Nigel and I were happy we still get to ride our bikes! (though you might notice we are reluctant to take our wetsuits off) 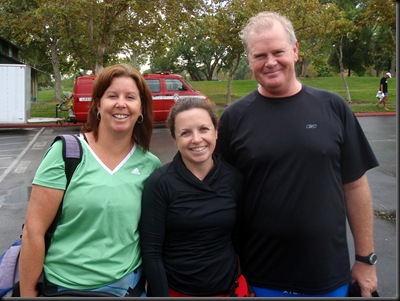 My ~52 mile route for the day took us all over new territory since we were riding from Shadow Cliffs instead of home. We warmed up on the Tri For Fun route around Pleasanton, then headed south to Sunol, west to Fremont via Niles Canyon, back east up the hills to Sunol, south on Calaveras towards Sunol Regional Wilderness, and back north into Pleasanton.

Climbing back up Niles Canyon. See those dots in the distance? Those are my riding partners. I was right on them in the climb but they dropped me on a downhill. (No comment about their inherent weight advantage on downhills) 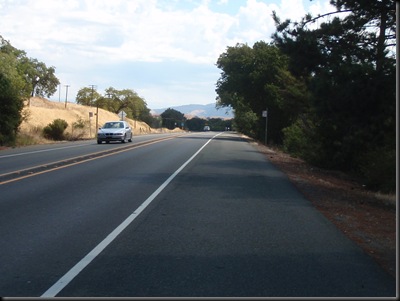 It didn’t matter though, I was still enjoying the beautiful ride! (and cranking along uphill at a pace that I couldn’t believe!) 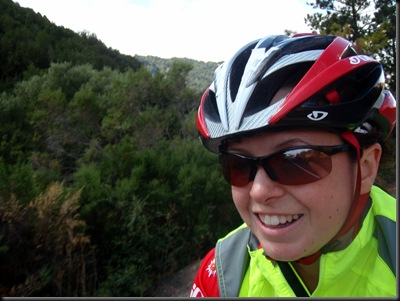 When we passed through “downtown” Sunol the final time (the town is the size of a postage stamp and has a saloon, a train station, a history museum, and a BBQ joint), Chris and I dropped the boys (who were taking a snack break) and pushed hard up Foothill to make them work to catch us. 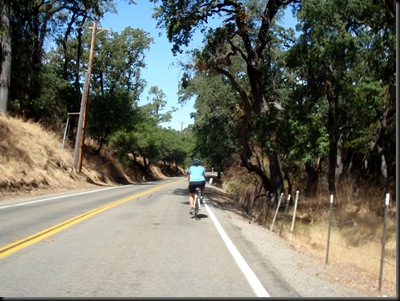 With only a 2 minute lead, we held them off for over 3 miles! And then the wheels came off. No, that’s not accurate; technically, Chris’s entire crank arm came off attached to her foot! With some MacGyverism and handy dandy tools, the guys fixed her up well enough to make it the 5-6 miles back to the car.

Just a couple miles to go – Chris and Nigel (and Jeff somewhere) behind me. Notice the beautiful weather now! 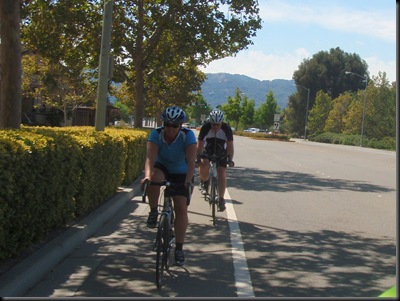 The guys were done with the ride and Chris could feel her crank coming loose, so I dropped the Scooby Gang back at Shadow Cliffs and went on to do another lap of the Tri For Fun course, this time in much stronger headwind than we’d had that morning. Chris hopped in the lake for a swim and said it felt like bathwater!

Full ride route. Pleasanton on top right, Alameda County Fairgrounds in upper center, Sunol in the center of where the 3 red lines meet, Fremont on the lower left. 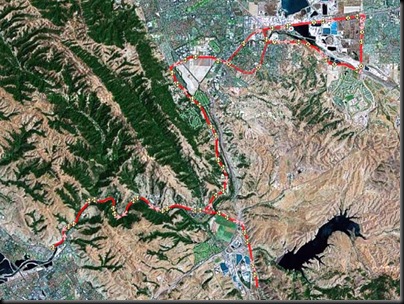 I’m glad we had a decent afternoon ride and I’m very pleased with my average pace, but I am still a little bummed out about the swim. I hope Coach and I can find a way to squeeze another one in somewhere!

too bad about the swim...but what a class A puppy face, very talented!

Hold the phone! Your swim was canceled due to rain? Did someone not get the memo that swimming is done in water?

Ha! You made the best out of a sort of sucky situation, didn't let what was out of your control get you down, and had a great ride!

So sad to hear the swim got cancelled! Darn that silly advantage on the downhill.

Agree with D!!!:) Still can't believe you guys got thunderstorms - holy cow! Sorry about that swim - BUT you still made the day work! Awesome!!! Nice work on that ride :)

Bummer about the swim race - but you totally made up for it with a great ride! Great job! Hopefully there will be another open water swim soon...

Aw, total bummer, Molly! I was thinking about your swim and hoping that it went well for you.

You don't need me to tell you that this kind of crap happens... suckfest! Probably like CA, all of our swim facilities are outdoors here in FL and since I pretty muc live in the lightnight capital of the world (or at least the Tampa area used to be), I get plucked from the pool a lot. Always a suckfest!

Glad you were able to salvage part of the day. Looks like a lovely bike ride!

Oh, major bummer about the swim. But indeed, thunder & lightening is not to be taken lightly. In Central FL, it's not that uncommon that someone will be struck by lightening.

Glad you guys at least got in a good ride!

Anytime a ride crosses a mountian range as viewed on satellite imagery you know you've gone a heck of a ways.