I survived Week 1 of Ironman training

That’s what I told Jeff when I rolled in from the last workout of the day.  Everything else this week was just buttering me up for the big key Sunday brick, the first of many long days of work ahead.

Today we tacked distance on to a ride we’d done before and went further south in the valley than we’ve ever done – all the way to lovely (hahahahaha) Hollister.  Hey, it’s flat and agricultural and quiet riding.

Before dawn, Jeff and I were in a Jack in the Box parking lot, getting our bike gear ready.  I’ve never carried so many bottles on a ride, but I had 2.5 bottles of water, 2 concentrated bottles of Infinit (nutrition), and 1 bottle of sports drink (to even out my rear-bottle carrier).

You know you are riding long when the first HOUR is warmup.  The sun was starting to peep out! 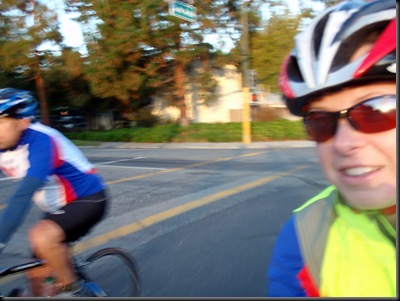 At the 5-mile mark, where George was to join us.  He was running late so we went on to downtown Morgan Hill to wait for him.  “George loves sprinting.  He can catch up.” 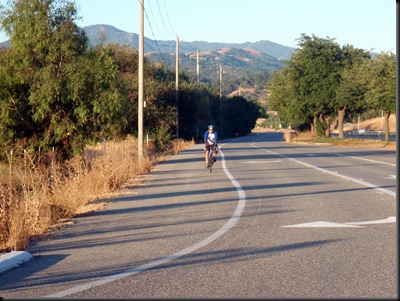 Jeff said he was letting me set the pace but I think he just liked to stare at the “Hot” emblazoned on the back of my bike shorts. 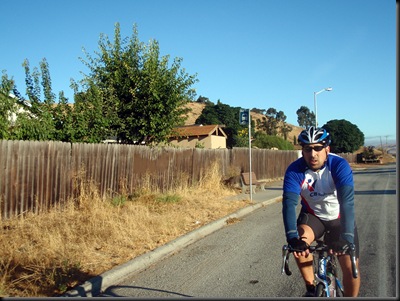 On a random farm road in Morgan Hill and George is finally cooling down from his sweaty 6-mile sprint to catch us.  Sorry, George! 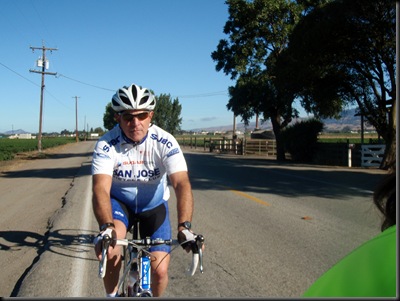 Nothing out here but cows 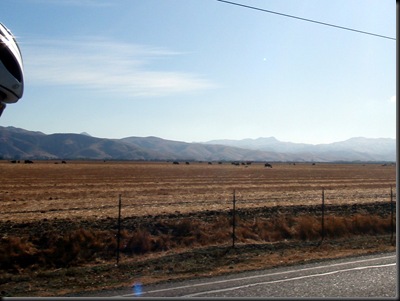 Really? There’s a good-sized town up there somewhere? 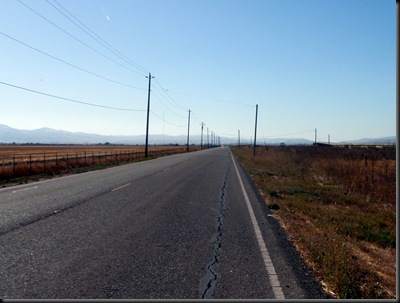 Finally we did in fact roll into cute little downtown Hollister (full of empty storefronts!) and find ourselves a 7-11 for refueling.  They weren’t letting us use the restroom though so we had to stop again on the way out of town for that. 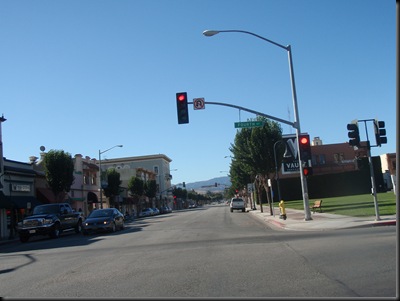 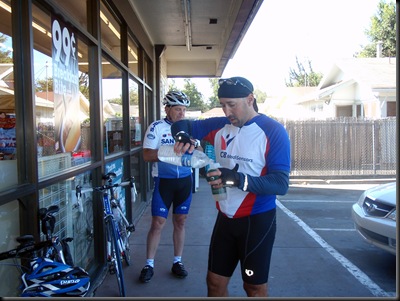 We had made the ~43 miles south in excellent time and were feeling good about the ride thus far.  5 miles to the north, our fortunes changed as the valley’s mid-day headwinds started up right on schedule.  Our pace went from an average of 18mph to something more like 11mph.  Ouch.  I wanted to pull to the side of the road and just cry, but I had 40 more miles to ride into that wind – time to just get it done.  We crawled our way back north, trying to use routes with more trees or cover but it didn’t always help much.  We weren’t so chatty after that, instead all fighting our own little battles with the wind. 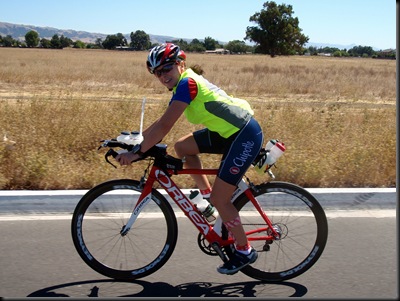 The last 6 miles from downtown Morgan Hill to George’s car, we formed a rotating paceline and took 1-minute turns pulling.  We were just desperate to get out of the wind!  My eyes were burning from salt and sunblock sweating into them, plus probably whatever the wind was blowing in there.

A snapshot of all of us at the 81-mile mark:

George is happy because he doesn’t have to ride anymore today! 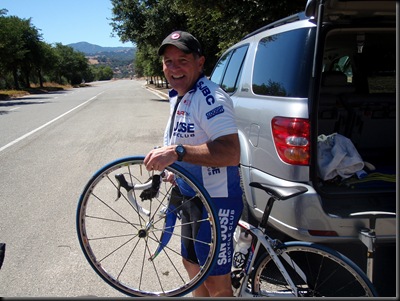 I am relieved that we only have 5 more miles to our car. 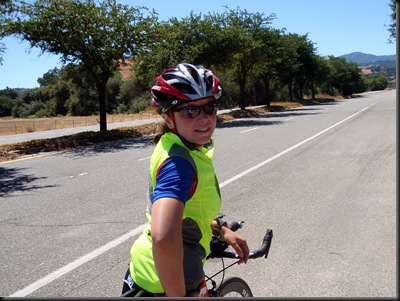 Jeff throttles his wife because his longest ride since Shasta Summit Century LAST AUGUST (2008!) turned out to be such a suckfest in the wind. 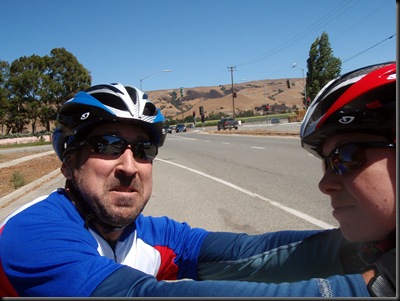 Jeff and I pedaled on north to our car, finally on cool-down mode and spinning our legs out, though still facing the wind.  And then finally, the Jack in the Box! The car! The end! 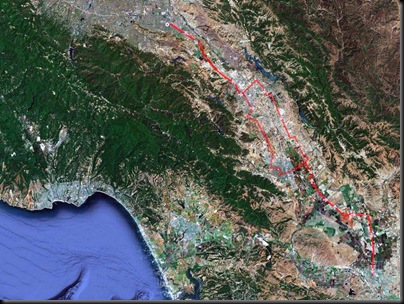 From there, we loaded up our gear and I sent Jeff off to a local BBQ restaurant for a beer – for me it was time for a run off the bike.  Despite all the pain the last few hours on the bike, I felt really good on the run!  My leg (still taped) behaved beautifully and even though it was hot I did not feel underfueled or bonky.  30 minutes later, I jogged up to where Jeff was waiting, devoured a cornbread muffin and chugged 4 glasses of lemonade and soda.  Phew!  The first big week is done!

Awesome! You got the same cycling shorts too! Woohoo!

You rock! And what's up with the 7-11 not letting you use their restroom??? Don't they know that everone who reads your blog is now going to boycott the 7-11 in Hollister???? Not cool, not cool.

Molly, I am so proud of you and just in awe of your terrific week! WAY TO GO! I hope this coming week is JUST as amazing (and challenging, it'll be worth it in the end) as last week! Go get 'em!

Sorry about that headwind, I think anyone who rides to the south can relate to your hell. You had a great week though, congrats!!!!

Yay, we have the same bike...just mine is black and white. Love that Orbea. Sounds like a killer training week in the books.

I think it is awesome Jeff rides with you. You are really lucky to have such an involved significant other!!!!

YAY! Great job getting in it done!

From there, we loaded up our gear and I sent Jeff off to a local BBQ restaurant for a beer

My GAWD woman, you are amazing :-)

The wind can make rides such a suckfest. Good job on yours! So are you off the beer now that Ironman training is on?

Way to GO! At this rate, they're going to have to rename it the 'Iron Woman'.

YEA! I am catching up, sorry. But dont you just love the infinit! IT works great for me. rich even uses it!