Once again, the week runs away with me and I never get around to blogging. The highlights:

* 2nd day of masters swim on Thursday and I didn't drown. Though our coach certainly tried his hardest, with what Melissa calls "the drowning drill." Everyone keeps telling me this masters swim thing will make my swimming improve dramatically - I hope so!

I also had a strength training workout assigned for Thursday. Many lunges and planks. I spent most of Friday and Saturday limping around pitifully as a result.

* FINALLY the start of hockey season - Sharks home opener on Thursday night against Anaheim and they had a wonderful win!

* Stanley and I went herding on Friday morning. He's having a case of the adolescent moodies and it shows. He heard his mother Maude bark while he was working the sheep and instantly took off for the fence to look for her. He had to be called back to work and then did pretty well. Beth and I will have to coordinate at the National to ensure that Stan and Maude and Bea are not looking for each other when it's time to herd.

* Speaking of which - holy crap, the National is 2 weeks away! Are we ready for ANY of the venues we'll be competing in?!!

* On Saturday we went for a bike ride with Nigel, Eric, Val and George. George had his brand new fancy bike and kicked all of our butts as always. We rode up by Stevens Creek Reservoir and into downtown Saratoga - I broke off from the group at that point as I wasn't supposed to ride long, and they went back over the hill to the reservoir.

After the ride, Jeff and I met up with Nigel at their favorite drinking establishment to watch Jeff's Sun Devils get crushed by USC. Between the two of them, I believe they polished off 3 pitchers of Fat Tire. I drove them home to finish watching the game and so they could have a few more beers. I don't even know how to describe these two together when they are drinking - it's like two 6-year-old boys making fart noises and giggling hysterically except with a more adult tone and topic. I'd provide some specific examples of what they were saying but that is likely to embarass them far too much.

Eventually Jeff and I made our way to HP Pavilion for the Sharks-Kings game - another win, yay!

* Today I had a long run on tap. Despite a decent amount of sleep, I woke up with a headache and a sore neck - how fair is that? Jeff wakes up feeling great and the one who drank only water yesterday feels hungover? Anyway, it was a perfect fall Sunday long run - cool weather, bright sunshine and legs that felt great. I had to run relatively easy for the first hour and then do some speed repeats on tired legs. I love this kind of run, pushing myself hard at the end to see what my legs can do. I will say that I'm really pleased with how comfortable I'm feeling at faster speeds these days. 10 miles and then I headed home for an ice bath and chocolate milk. I had forgotten how dazed long runs leave me for a couple hours. 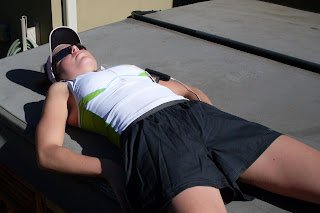 After sitting for a second out back to talk to Jeff (and ending up lying down and not wanting to get up), I took a very long time to shower, check email and get dressed before tackling cleanup around the house and prepping for the workweek.

* The seven days ahead hold my hardest training week yet for Vegas and a reasonably busy time at work as well. I will have to make sure I go to bed early where possible to get enough sleep, especially with this new masters swim schedule. I'm going to try to squeeze in a day or two of agility with Max next weekend as well as a yoga class mid-week. Have a good week, everyone!
Posted by Molly at 5:48 PM

woohoo! no drowning at the masters swim! You gotta love that!

I still haven't gotten the balls up to do one. I'm afraid the coach'll have me doing flies and I *will* drown if I have to fly.