The day started bright and early when I went to bed around 11pm and discovered I’d messed my back up somewhere along the way in airline travels and hotel beds.  Oh sorry, I mean the day started dark and early when Danni’s alarm went off at 5am.  But really, I spent half the night trying to find positions that would stretch my back out.

Danni went ahead to transition to prepare her gear while I dawdled in the room.  I headed to the swim start around 7am to meet her and our other friends there.

We watched the mens and womens pro waves take off the dock (all other waves would be doing a water start). 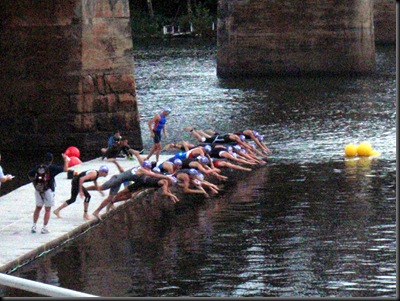 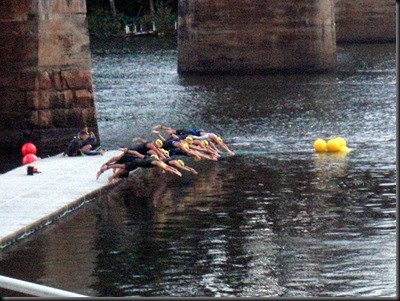 Danni was ready to rock and roll! 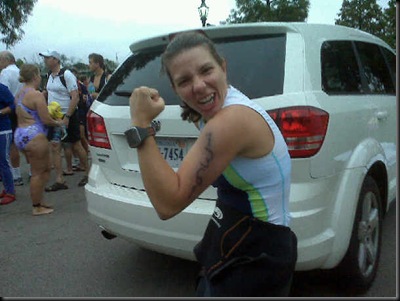 Wes was prepared and eager to start as well 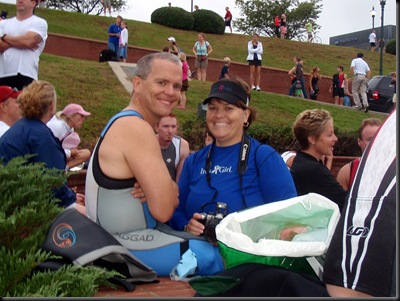 I was so happy I finally found Sherry right before her wave started! 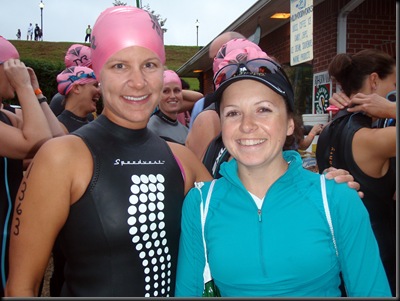 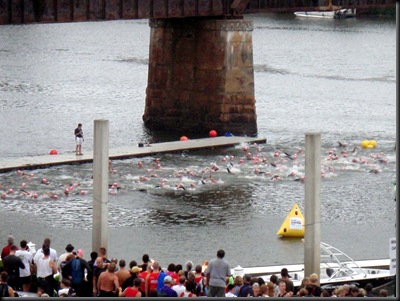 Wes still had a number of waves to wait through 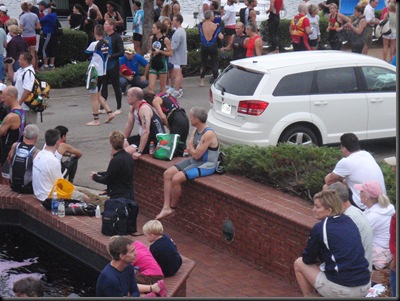 After taking Danni’s pre-race bag back to the hotel, I dashed to the swim finish to make sure I saw everyone get out.

Danni was right on her heels, just a minute behind her out of the water.  Great job, ladies!

And not too long after, there was Wes with another swift time, and a wave to acknowledge the ELF’s reminders that I was shouting at him as he rode away

On my walk back to the hotel to shower while everyone was riding, I ran into this little guy for the 2nd time of the morning.  He was too skittish to let me near him but seemed to have his own little setup in an abandoned hotel parking lot.  :( 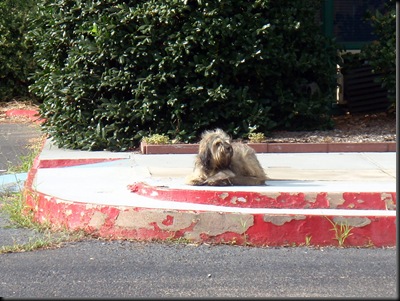 A typical scene from downtown Augusta (on my 5 block walk back to the hotel from transition).  So many closed-down storefronts and empty space.  Again, :( 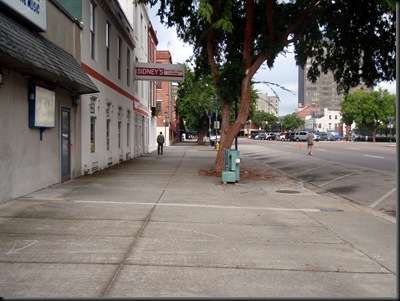 After a bit of cleanup and relaxation, it was time to move down to the run course for several hours of chasing my people around.  The first racer I saw go by was Laura Bennett, running down Pip Taylor for the lead.  Laura ended up winning the women’s pro race, and her husband Greg won the men’s race. 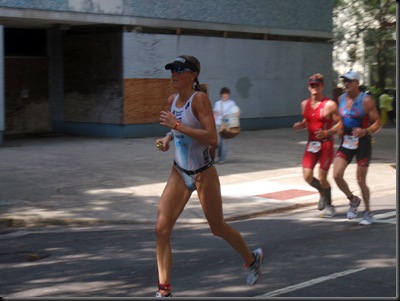 She did the entire race in that bathing suit.  She is so much smaller than I expected in person. 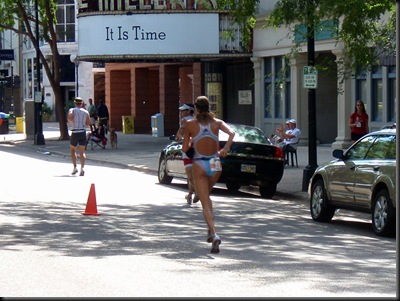 Before long, Danni and Sherry were rolling into transition with smoking fast bike times.  They looked great headed out on their run. 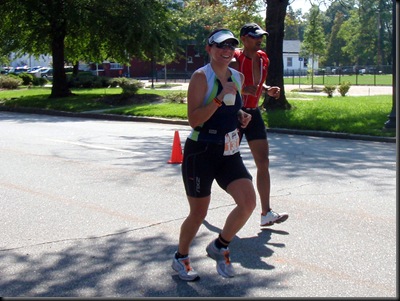 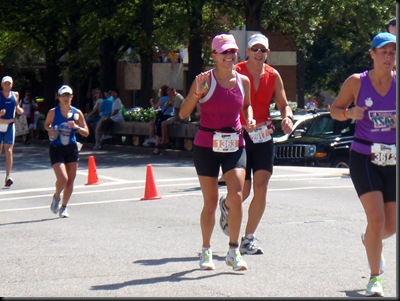 Not long after, Wes was in the mix after a fantastic bike ride. 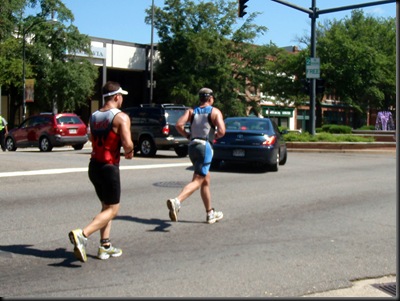 I did my best to entertain them and keep them smiling as I saw them every 2-3 miles.  I ran alongside them, passing on words of encouragement from their coaches and telling them how FREAKING FAST they were!

I was thrilled to be at the finish line and watch Danni absolutely CRUSH her old 1/2 Iron PR.  She stuck with her race from start to finish, hung tough and “kept her shit together.” 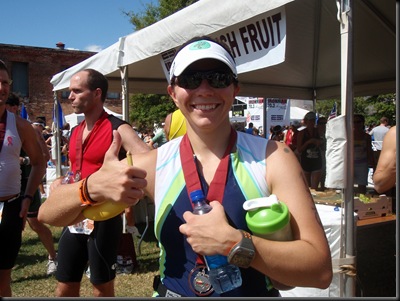 And Sherry finished her first 1/2 Iron! So proud of her! 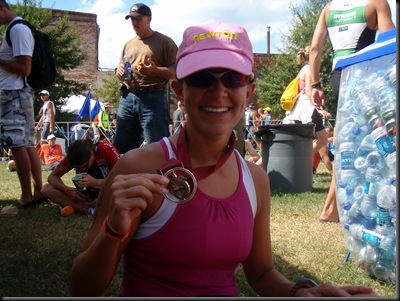 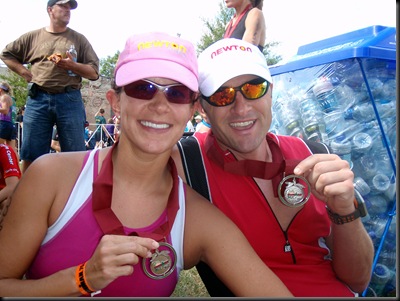 Finally it was time for us to cheer Wes on in from a rough run.  From all the Facebook comments going back and forth, I hear it was a PR effort for him as well.  Congrats Wes!!!  He’s happy to be done, I’m sure he is. :) 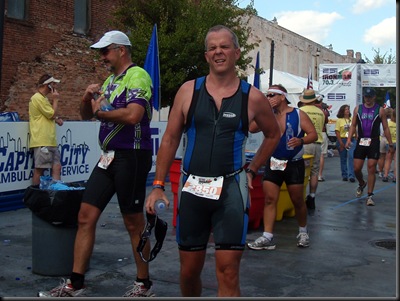 With that, our adventures were concluded and it was time to schlep Danni to transition to collect her gear and then walk it all back to the hotel.  She cleaned up, packed her stuff and hit the road!

Since I don’t fly out until tomorrow morning, I had to find some dinner before all of “vibrant” downtown Augusta shut down (the race folks had to convince like 3 coffee shops/restaurants to stay open on Sunday to feed all the spectators – when I went to buy lunch, it became clear how overwhelmed they were by the whole event).

I walked the 5 blocks to Nacho Mama’s – about the only thing left open – and back with my dinner.  It was 5:30 pm and already the race had cleared out of town and it was nearly empty.  Except all the nice gentlemen hanging out in the alley one block from my hotel, who felt the special need to tell me exactly how nice I looked.  Um, awkward?!  Good thing I didn’t race today and could walk very fast.  Given the fear of running out of food that we faced yesterday, I might have gone a little overboard but better safe than sorry, right? 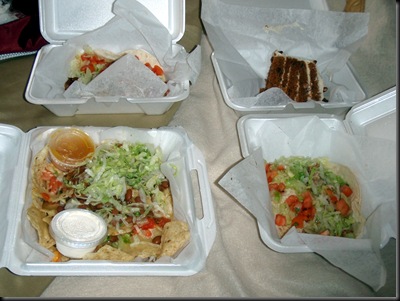 I’m enjoying a quiet evening in front of the TV, keeping my feet up (and compression socks on) and trying to rest my back.   I’ll be at the airport bright and early, hoping Delta will get me home!

Enjoy the rest of your weekends!  Congrats to all of my friends who raced this weekend, including 2 back home who did their first triathlons!

awesome spectathlete report! great pictures. hope you didn't run out of food and that delta gets you back to your side of the country!

It was a rough run... But you did make me smile, and I did appreciate the support :-)

Great job spectathleting! Wow, how frustrating with Delta. I would be pretty peeved after finding out my flights had been switched like that. And now everyone is charging up the wazoo for extras too now it seems!

Glad you managed to track down some food at the end of the day! Shame to hear the town is a bit of a ghost town... :(

Molly... it was SO awesome having you there this weekend. Seeing your smiling face DURING the race was priceless and I darn it, I just can't thank you enough! I kept looking for you and your pink compression socks. You lifted my spirit with every smile!

THANKS again SO MUCH for the great pictures!

Wow, how fun to see all those folks racing! I admit I seldom have been a spectator at races (but have often worked them). Thanks for all the photos. Great to hear that Sherry and her hubby finished. She'd better get her race report up soon ;-)